This morning we headed to the Rayburn House Office building, a beautiful and ornate structure. Adorning the walls were paintings of important individuals and events in American history. I knew we were going to have a full day. We had three interviews lined up with Congressman Howard Berman, Congressman Barney Frank, and Congressman Dennis Kucinich. I was excited but also a bit nervous because I did not know what to expect.

When the interview first began he seemed a bit quiet and even reserved. It appeared to me that he quickly became aware that we had done our homework. As we started asking our questioned he seemed to enjoy that we had made an effort, and as the interview progressed we became more confident.

The main lesson that Congressman Berman taught me was to be optimistic. He said that being a Congressperson would be, “A stupid job to take if you are not optimistic.” He said that if he let things in Congress get him down he would leave every day with his head hung low and wanting to quit. Part of what keeps him optimistic is his belief that Congress is about making incremental, small changes. These changes may not get you in the spotlight but they can change the quality of people’s lives.


Before our interview with Barney Frank we had the opportunity to visit with Tom Tucker, Congressman Farr’s Appointment Secretary. We asked him questions about his job and the people he works with.

Tom Tucker was a light-hearted and soft-spoken guy who was a delight to speak to. He told us what it was like to work with Congressman Sam Farr. He said that Congressman Farr loves talking to people and engaging in big picture conversations. He said that the best part of his job is that he never gets bored.
-Sara Birns

Our second interview of the day was with Congressman Barney Frank of Massachusetts. Congressman Frank was the first openly gay member of Congress and is known for being fairly brash and outspoken. When Congressman Frank walked into the room, he was holding a crumpled up newspaper and wore a slightly wrinkled shirt. I was a bit intimidated at first by the way Congressman Frank sat down and immediately asked for questions. My classmates timidly began asking our prepared questions. He answered very intelligently and articulately. Once I saw how thoughtful his responses were I was put at ease.

I enjoyed our interview with Congressman Frank because I felt he gave us the most raw and candid responses to our questions. The part of our interview with Congressman Barney Frank that I found to be the most significant was his response to a question I asked him. The question referred to Historian Barbara Tuchman who said that it is essential for society to have a positive goal or vision for itself. I asked Congressman Frank what his vision for America was. He responded by saying that he disagreed with Tuchman’s sentiment and that he didn’t have a vision for America. He went on to say that all he wanted for Americans was a society free of poverty and sufficient resources to be happy. Congressman Frank said, “People should eat well, be happy however they want and get a good night’s sleep.” He also said, “I don’t believe America needs a national purpose”. Congressman Frank brought up the point that when a county has an aspiration or a target, the goal is often unrelated to the welfare of its people. Congressman Frank said he would rather see the billions of dollars spent on the Mars space exploration program go to “having less kids go hungry”. He felt that America doesn’t need to be the greatest country in the world; it just needs to take care of its people.


Going into the interview with Congressman Kucinich, I had very few expectations. He quickly caught my interest when he started talking about our society’s “disconnect from nature.” This was important to me because I feel like a lot of the time we forget the impact we have on the environment and on nature. I appreciated his thoughtfulness and clear answers. At the end of the interview he had his assistant take all of our names so that he could give us copies of his book. I am excited to read it.
-James Clifton
I think what I got most out of the interview today with Congressmen Dennis Kucinich was his sense of unity. “We need to own where we come from”, he said passionately. Congressmen Kucinich spoke about how all of us on this planet are intertwined. He thinks that we are forgetting our connection to the natural world and he finds this troubling. He thinks we need to change our relationship with the planet. He said that the connection between man and nature brings a sense of happiness that can’t be found through materialism and money. As a man who came from poverty, who is now a Congressman, Kucinich embodies the American Dream. He can now use his position to give voice to those who have none. He said, “We are here to put spiritual principals in the materialistic world.” In one way or another, everything Congressman Kucinich spoke about referenced the idea that, as a whole, we need more unity. I think Congressman Kucinich is an inspiration to all. 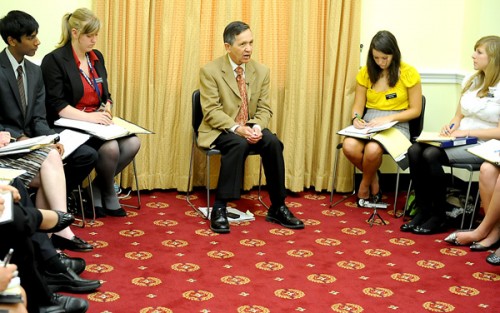 Congressman Dennis Kucinich and Jackie Speier are the two people we’ve interviewed who I feel most embody the core principles that they advised us to exemplify. Congresswoman Jackie Speier, who we interviewed Wednesday, advised us to “keep moving forward” no matter what. Congressman Kucinich advised us to “never give up.”
By the time Congressman Kucinich was 17 and left home, he had lived in 21 different places including cars. There were times when his family did not know when or where the next dollar was coming from. He also told us a story of when he was three years old and he learned to read. Through reading he was able to experience the world without actually seeing it, keeping all he learned inside. This allowed him to differentiate and maintain a balance between his internal and external worlds. I appreciated it when he said, “Everyday we meet resistance.” This helped me to see that the difficulties in life can be approached with a positive attitude. Both Congresswoman Speier and Congressman Kucinich showed us that life may present us with unreasonable and unfair situations or choices. We can only survive these unfortunate events by having the will to move forward and never giving up.
-Maya Guzman


When I woke up today I was expecting another day of interviews and nothing too out of the ordinary. After our three interviews, we walked over to the Capitol building. We stood on the steps waiting for Congressmen and Congresswomen to walk out from the vote they had just made. At first I felt nervous to go up to them. I thought that they would consider this a nuisance. I thought that because they are so important that they would have better things to do than talk to a bunch of high school students.


The first person I talked to was a Congresswoman from Wisconsin named Gwen Moore. I was pleasantly surprised by the interest and kindness she showed me. After speaking with her, we approached Jeff Flake, who we had interviewed the day before. He remembered us and was excited to see us again. I found it funny that as we were talking to him, other Congressmen as they went by were making teasing remarks about how popular he looked. Next came one of our best interactions of all: Congressman Sam Farr. He is a very nice, friendly, and sociable man. It helped that Ward is friends with him, calling him “Uncle Sam.” We had a very long amiable conversation with him. This led to a tour of the Capitol building and we went to the gallery to watch the Congress vote on a resolution. I found it hard to follow what was happening on the House floor but it was interesting to find the Congressmen and Congresswomen we knew. We excitedly pointed out those we had already interviewed and the ones that we were going to interview later in the trip. We then had the honor to go tour Congressman Sam Farr’s office, where he showed us some of his memorabilia. Today was a very spontaneous day and I thoroughly enjoyed it. It’s crazy the kind of people you meet here in D.C. The opportunities just seem to keep coming.
-Chelsea Bess

Today solidified everything we have been practicing and preparing for this trip. Today was a day I felt that we were given the opportunity to really show our capabilities. We managed to hold our own when interviewing strong minded Congressmen such as Dennis Kucinich, Barney Frank, and Howard Berman. We even had the chance to work the Capitol steps and introduce ourselves to the Congressmen and Congresswomen coming from the House floor. It was an exhilarating process because I never knew how the conversation would progress. I could sense that some of the people were in a hurry and I just let them go. Others were more approachable, but not very talkative. Then there were some who were open and willing to engage with me in that moment, right then and there. We managed to get a few good conversations through “working the steps”. For example, we ran into Congressman Jeff Flake who we had interviewed the day before. He was happy to see us and mentioned how impressed he was with our interview questions. We also ran into Congressman John Lewis, who we are going to be meeting with in just a few days. One of the most intriguing Representatives we talked to was someone we had never heard of before, Congressman Parker Griffith. He is a Congressman from Alabama. He was very interested in what we had to say and we managed to throw in a few general questions. It was like a mini-interview on the Capitol steps.
After wrapping up our conversations, we all met up with our own Congressman Sam Farr on the Capitol steps and headed for a tour of the Capitol building. He took us around and we sat in the House Gallery to watch some of the debates and votes on the House floor. Afterwards, he took us to his office and explained to us more about the details his job.
When I entered his office, I saw a woman behind the front desk. She looked extremely familiar so I asked Tom Tucker who she was. She was an intern and it was her first day on the job. I asked her where she was from and she said Scotts Valley, CA. It turns out that we went to middle school together. Seeing her there showed me that I could be that person. If I want to do something, I can do it. I guess that’s what I got out of the day. Hard work and preparation pay off.
-Amar Nijor