When I have traveled to various places within the United States, I have always noticed how similar everything is, despite a few clear differences. There is often familiar vegetation, a familiar store, or at least a common way of going about your day.
Not in India. The minute I stepped out of the airport it was clear I was in a completely new place. The mixed smell of smog and blossoming flowers was different. The multiple men forcibly trying to help me with my cart so they could receive a tip they desperately needed, was different; and the mix of neon lit hotels and crumbling buildings hidden behind lush trees was certainly different. I saw all of this during our 2 AM journey from the airport to our rooms at the YWCA in Delhi. 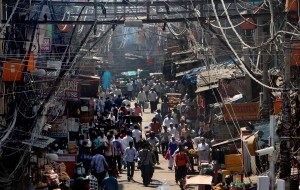 It has been just one day, but I feel like I have been here for much longer. Today started early, and everything we saw was new, and we saw a lot. The combination of seeing the view of Delhi from the top of Jama Masjid (the largest mosque in India) and our rickshaw ride through Old Delhi showed me a city that is an entirely different world from my own.

From the top of the tower at Jama Misjid I had a 360 degree view of the city of Delhi. As far as the eye could see there were houses and shops built up around each other. They seemed to go on forever, in each direction, in a very chaotic, haphazard, though similar, way. This chaos could also be found in the streets where cars, bikes, motorcycles, and buses battled to go in both directions in what seemed like a single lane, one-way road. There were vendors selling everything from fried Indian food (that I couldn’t identify), to holi powder, to plastic toys that looked like they should be sold in a CVS. It was loud and smelly, but it could also be quiet (at least comparably) and fragrant. Each winding, unplanned road was the same with only slight differences. It couldn’t have been farther from our relatively clean and uniquely designed Santa Cruz.

I knew India would be incredibly different. I was told many times about how shocked I would be by all the sights and so it’s hard to say I am surprised at how surprised I am. However, I still feel like I am in a picture or movie rather than a real place. I know I am still digesting all that I have seen, but I am content to say that I have finally found a place that is truly different.

I experienced something today that I have only seen in movies. Aimee and I sat with a snake charmer as he manipulated two snakes into performing for a crowd. I have had no issue with snakes in the past but this was on a whole new level. The feeling of the snake slithering around my neck, even though I was assured that it was not venomous and was fangless, was nonetheless terrifying. As I cringed and whimpered, a very large, very amused crowd gathered to enjoy my torment. As I spent more time with the snake, I began to relax and marvel at the fact that I was in India sitting with a man who made cobras dance.

That wasn’t the only exhilarating experience of my day. The traffic laws in India are thought of more as suggestions than rules. The goal for drivers is to get to their destination as quickly as possible no matter what it takes. This often leads to fast moving and exciting (potentially lethal) experiences. This does not only apply to cars. In our case this was demonstrated the best during our adventures on the rickshaws. Rickshaws are two person seats attached to a bike; the taxis of India. Girls and boys were told to partner together for our ride and Willy and I ended up in the same rickshaw. Because of our shared competitive nature, we decided from the beginning that we must finish in first place. Our driver seemed on board with the idea and proceeded to do everything in his power to ensure our victory. We swerved around buses, took cars head on, and even battled with neighboring rickshaws. Though we broke down twice, we still ended up victorious.

When we weren’t involved in a high-speed chase, the rickshaws provided a fast and efficient way of seeing a lot of an amazing city in very little time. In the half hour we spent on the rickshaws, we saw more things than my mind could take in. Delhi has everything from amazing temples, to bustling marketplaces, to India’s biggest mosque. It is both inspiring and humbling to be in a city so otherworldly. It really shows me that the world is a place that holds wonders that I have not even begun to imagine.

It’s been five years since I last visited India. I’ve experienced the distinct smells, the people, the culture shock, and yet I still have the same excitement and wonder as I did the first time I came, especially because I am here with my classmates. I believe we handled the first day of the trip like champs. We proved that we could have tons of fun in a new and foreign country, in sweltering heat, with minimal sleep.

Today was about experiencing Delhi and starting to adjust to our new surroundings. I held a “charmed” cobra, took a ride in a rickshaw, and climbed one of the towers of the largest mosque in India. From the top we surveyed the city as far as the smog would allow, the boundaries included mostly multicolored rooftops and the glorious Red Fort. From the rickshaws we explored Old Delhi up close and personal and had the opportunity to catch a glimpse of Indian life and culture. After our adventure, I have decided that a new language should be added to the long list of languages spoken throughout India: the language of the automobile horn. The drivers of Delhi seem to honk their horn just as often as they place their feet on the brakes. They must have a secret code that I don’t know about because everyone seems to emerge from the horn honking chaos mostly unscathed.

All in all, today taught me that my class is ready for the whole of India. We have tested the waters, and now we are ready to take the plunge, and personally, I can’t think of any other group of people I’d rather take it with.

From the spire at Jama Masjid we beheld Old Delhi, a dense, seemingly endless urban sprawl which stretched for miles, fading into the smoggy horizon. The decrepit, three story buildings formed a canopy that concealed the bustling community below. The dirty, crumbling structures gave an impression of poverty and neglect and made me uncomfortably aware of my many fortunes.

Our rickshaw ride through the city revealed a far different world than the one seen from above. The narrow streets were packed with rickshaws, vikrams and motorcycles, and the sidewalks were one continuous bazaar, home to street vendors of all kinds. After just a few turns I felt utterly lost in this jungle. The buildings formed solid walls that seemed to close in around us and though the many alleyways, which honeycomb the city, offered some escape from the crowd. I found them both intimidating and disorienting. As we returned to the main road, we saw incredibly beautiful temples sandwiched tightly by decaying apartments, hotels and questionable dentists. This created a powerful contrast and highlighted the importance of the religious structures.

Though brief, our ride through Old Delhi was eye opening for me. Coming from the Mount Madonna area, the social workings of such a dense city were completely alien to me and the journey illuminated a way of life that even now is difficult for me to comprehend.