Today began at 6 AM with the ring of the ashram bell. Jake, Daniel, Joseph, Graydon and I joined the kids for Crossfit. It was great to be able to do something active, but more importantly Crossfit was a bonding experience for the Mount Madonna and Ashram guys.

Working out and playing sports together is like a manifestation of the primordial hunt. I am forming connections with the kids here in the same way that people have since time immemorial. Immediately after meeting the ashram guys, we were able to find common ground and build friendship through sweating and playing together, just as our ancestors did thousand of years ago through hunting. It seems like playing sports is one of the ways the kids here form bonds with the many passing strangers that come through. We have played Ultimate Frisbee, soccer and cricket. I find that playing is the most natural way to form friendships here.

Today, after spending time with the kids from the Ashram, we visited Mrs. Mishra, a long time friend of Sri Ram Ashram. She kindly treated us to tea and samosas. After our lovely tea, we walked along the streets of the Haridwar marketplace. It was overwhelming. The street shops were full of decorated brass ornaments, statues of Hindu gods, silk scarves, sandalwood malas, and the occasional hidden shop selling churidars and kurtas.

However, all of the excitement and curiosity still couldn’t hide the immense poverty and suffering that was sadly prevalent. While in the marketplace, I peered down at my feet to see a boy scooting himself along. The boy was missing one leg and it was apparent that he had not been bathed in a long time. He tugged on people walking by, but they ignored him. It is different to see true poverty. Being exposed to something so incredibly foreign and unfamiliar is always shocking at first, but I feel myself adapting and realizing how different certain towns and living styles are from where I live. It has taken a lot of getting used to, but seeing such poverty is helping me realize how privileged I am at home and that I need to respect and cherish that.

After shopping, we took part in Har Ki Pauri. We walked deep into town, and sat on a bridge overlooking the Ganga River. We listened to chanting as the streets flooded with people carrying marigolds, daisies and roses in woven leaf bowls. Inside each bowl was a small clay pot cradling a wick. Once the sun went down people rolled up their pants and began lighting the wicks, reciting a prayer, blessing themselves with both the heat and the water and sending their flower boats as offerings down the river.  The river soon filled with flames and flowers as we stood ankle deep at the side of the Ganga. The ceremony was different from anything else that I have ever experienced. There was a unity; thousands gather every single night in this town to say prayers together and perform a beautiful ritual. I felt honored to experience a little part of this community.

Tonight reminded me so much of the community shared by both Mount Madonna School and the ashram. No matter how busy we are, we will always be a part of this developing community and family. The unity I saw tonight wasn’t at all unfamiliar; I have felt it a lot on this trip. I feel as if we leave places with more friends than we started with and that we are creating a new a family that we can be proud to be a part of. 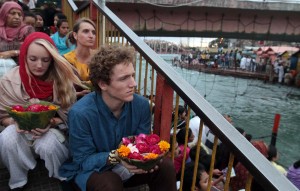 We were laughing as we pushed through the crowded Haridwar market. Vikash and Vijay Pal entertained us as they guided Bryson, Willy and I through the streets. We moved through the varying twists, smells and sounds, the buildings close together yet far overhead; a tunnel of sorts. Finally we appeared upon the banks of the Ganga. Steps hewn from marble, leading into the crystalline aqua waters, darkened by the clouds and the coming nightfall. Ten thousand people crowded along the shore as the sun set, ten thousand prayers. As the night grew dark Har Ki Pauri began, boats made of leaves flowing by in the swift current. Each giving off a small glow from the candle nestled within the bed of flowers. Hundreds came and passed, each representing hopes, dreams and memories. We watched for what seemed like hours yet only a few minutes at the same time. As the ceremony came to its end it was my turn to walk to the edge of the river. I stood knee deep in the Ganga with my flame burning bright needing only a small push to carry a simple prayer out into the rushing current.