Today we took time out of our busy schedule to do some sightseeing. After our interview with Susan Markham, we turned down the street, in the opposite direction of the metro station, and strolled instead to the Lincoln Memorial. When we got there, I stood at the edge of the mirror pond looking out at the reflection of the Washington Monument rippling on the surface. Behind me, the statue of Lincoln gazed down, his stone face casting a stern look on the other school groups and tourists, gawking at us in our fancy clothes. I stood there, feeling a sense of electrifying tranquility wash over me.

After we were done taking pictures, we made our way down to the Vietnam War Memorial. In the weeks leading up to this trip we had learned about the war in history class. As someone who is enthralled by history, I was excited to experience the memorial for myself. 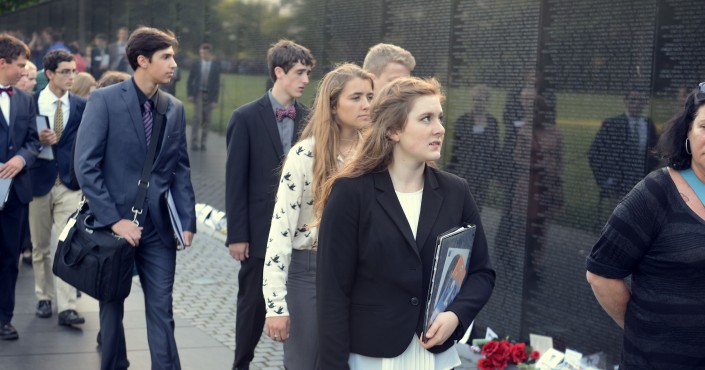 As the group moved ahead, I lagged behind to rifle through the dense book of names that was on the wall. I wanted to pick one out, to make the effort to find a random soldier who had given his life, and thank him for his sacrifice. The soldier I picked was named Melvin Leo Sanders. I made my way slowly down the path, scanning the black slab of stone for a glimpse of his name. As I walked, I tried to imagine who he might have been. Did he have a wife? Kids? What job did he have before the war? What dreams of his were cut short when he never saw the end of it? I finally found him. I stood there, staring at that one name in a list of thousands. The name stared blankly back at me, a summary of a man’s entire life, just etched there. After standing there, deep in thought, I finally came back to reality. I looked up in search of my group, only to find they were nowhere in sight. I was about to go off in search of them when I saw a woman standing to the side of the memorial. She was standing alone, crying, clutching a small, black and white photo of a man in her hand. It broke my heart to see her standing there, vulnerable, in front of the looming wall full of names. I approached her and introduced myself. She told me that the man in the photo was her husband. His name was Ryan and he had died in the war. I felt tears well up, stinging my eyes. Fighting them back, I thanked her for what her husband had done. She smiled at me, through her own tears that were streaming down her face. “God bless you,” she said, before walking away. I turned in search of my group, with hot, salty tears spilling down my cheeks. I stood slightly to the side, trying to hide that I was crying from my classmates.