Peter Harris’ nonfiction books, Birth and In A Different Time explore two different struggles in South Africa: a country that is undergoing corrupted elections and a group of convicts sentenced to death. Luckily, I had the chance to read one of these explorations, In A Different Time, the story of the Delmas Four trial. I spent the last few months reading this book alongside my assigned book circle, which included Elise, Saniya, and Miles. I was enraptured with how he told the story and the structure of the book. Every other chapter switched between the present day with the trial, the life experiences of each of the Delmas Four, and the mysterious section titled “The Bomb.” Ever since I finished reading the book, I immediately wanted to meet the man behind these inspiring words and stories.

I exited the bus, filled with excitement and joy, and walked with my fellow classmates up the under-construction parking garage until we entered the modern and almost-futuristic office building, which was also under-construction. Climbing up the floating stone and glass stairway that winded up along the inside of the building, we finally made it to our destination. In the conference room where the interview would take place, I navigated my way through the maze of chairs, and found my seat, four spots away from Peter Harris’ chair. I sat down in the chair that overlooked the skyline of Johannesburg and prepared myself as the moment arrived. As the anticipation rose, we all stood up and Peter entered the room. The questions began flowing and answers were spat right back out again. This time was different though. Unlike the other interviewee’s responses, which were long and tangential, Peter’s answers were clear and to the point. He said what needed to be said and was 100% genuine. As the questions progressed, the topic of failure was put to the table. He began saying that failure is a part of everything, and it’s just the way you end up dealing with it and how you move on from your mistakes. You just need the conviction that you’ll succeed. It was awesome to hear this from a man who is quite modest and doesn’t like acknowledging his achievements. It was also interesting to hear why he chose to defend the Delmas Four. He simply stated that it was the right thing to do. 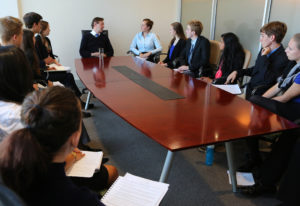 The interview came to a close, and low and behold, we ended up singing our hit single, Shosholoza. We exchanged our thank yous and decided to take a group photo with Peter Harris outside the office on the stairs. After the photo was taken, we all shook hands with Peter Harris, which left me with a feeling of disbelief. After he left, I ran over to Elise and we both exclaimed, “We just shook hands with Peter Harris!” We fan-girled all the way back down the stairs. As we boarded the bus, I felt a feeling of dissatisfaction with the final interview, but as the day went on and after I really had time to sit on what I just experienced. I realized that, in my opinion, this was one of the best interviews of the trip. I had the chance to meet someone who inspired me with his writing, and I got a glimpse into his real and genuine side. I have no doubts that this experience will remain with me for the rest of the trip and summer.

Instantly, my heart jumped and my face brightened as I watched Peter Harris walk through the glass doorway. It was as if I was meeting the star from my favorite film. However he is not a movie star; Peter Harris is the author of the novel In a Different Time. Mr. Harris walked behind my chair and sat in his designated seat. I remembered the small rectangular picture of him on the back of his book. It was as if that portrait had come to life and was now sitting right before my eyes. His collared shirt and pullover sweater suited his unruffled personality. While he carried an aura of celebrity, his composure was somewhat serene and modest, as if he himself was entirely unaware of this aura. 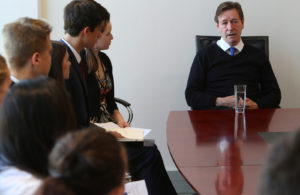 His answers to our questions were terse and to the point but each one had a significant value. I was especially struck by his answer to the question, “ Do you have any concerns about today’s young people forgetting the importance and significance of the struggle against Apartheid?” This question has been a common theme in previous interviews, but Mr. Harris gave us a different interpretation. He explained to us that it is important for the young children in South Africa to learn about the battle against Apartheid, but it is also important to move on from the tragic past. For instance, his advice to our generation was to “fulfill our dreams” and “do something of significance” in our community. This inspired me to serve my city, school, and family. Given my privileges I feel obligated to share this with others.

Another question we asked was, “What qualities help people advance in their careers?” Once again he had a concise response. He immediately stated, “moral integrity.” I found this particularly interesting given that he carries similar traits. His moral reliability as a lawyer was continuously demonstrated during his work in the Delmas Four trial. Peter Harris possesses the qualities of an ideal leader and others should attempt to follow them. Personally I hope to obtain these qualities as I progress into adulthood because it’s important to carry this trait into the world, mainly because the world needs more ethical leaders.