Yesterday morning we parted from the city and our hostel to head northwest towards Ward’s family estate in Bluemont, Virginia. It was exactly what was needed after a strenuous five days of political interviews. We were given ten acres of beautiful deciduous forest, a two-story rustic house, and the freedom to run around and hang out with our friends. Of course we had to make time to prepare for interviews and write for the blog, but this didn’t take away from the homey feeling of the house. We worked beside a fireplace, rather than a humid, underground dinner hall. 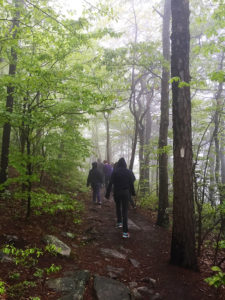 Due to the small size of the house most of the group had to stay at a place called the Bear’s Den down the road. I had no knowledge of this place. I just hoped it was as cozy as Ward’s family home. It was. It was one of the coziest places I have ever stayed. Aside from the room full of bunk beds, I wouldn’t have been able to tell if this was large house or a hostel. It also had a small convenience store/gift shop, giving the guys in our class the ability to eat three full-sized pizzas before we fell asleep.

The location of the Bear’s Den is a marvelous sight. It sits right against the Appalachian Trail, a trail that spans from Georgia to Maine, and we just happened to be spending the night right beside it. Haley gave us the option to wake up earlier and hike part of it or sleep in. I wanted to sleep in, but then I remembered that waking up early for the safari in South Africa turned out very well, so I decided to hike without question. It was a beautiful, foggy walk in an area of the country I have never explored.

As we returned to the house to eat breakfast and continue preparing for the rest of the interviews, I started to get excited about returning to Washington, DC. This side trip was a great experience and a great break from the constant working and walking within the city, but I got really used to the busy schedule and lifestyle of the city, and I am definitely ready to get back to what we came here for.

Dew and rain stuck to the windshield as the caravan of silver vans rode into the mist and fog of the mountains. Up and up we went, spiraling through trees, rocks, and roads. As the string of cars turned into the stone fenced road, the fog of the outside enveloped our field of view, leaving just a trace of the trees, leaves, and stones that lay beyond the mist. After traveling through the small paths of gravel and rocks, the vans finally entered the oasis of the Mailliard residence. The main house is paneled with beautiful wood and surrounded by rock pathways leading through a garden of nature and blooming flowers of every kind. The inside of the establishment is luxurious, and yet keeps the sense of camp and nature. As the day went on, the fire grew greater and greater, and the laughs and games increased. Riddles were told, tricks were played, and interviews and research were done. After lasagna dinner and singing our hearts out to rehearse the rendition of the Star Spangled Banner that our music teacher Brian taught us, half of the group left to stay at the Bear’s Den Campground, a five-minute drive from the main house. The house at the Bear’s Den was quiet, and it almost felt like home. As the night progressed, reflection of the day caused inspiration, music was made with friends, ice cream was eaten, pizza was burned, and beds were made.

Sunday began with an early morning hike on the Appalachian Trail and donuts, pancakes, and pie for breakfast. The trail was full of sharp protruding rocks, mud puddles, greenery of all shapes and sizes, and the same fog as before. Rain fell from the heavens, stained my clothes with the dew of the trees, and splattered across my face. At this moment, I felt at home. The time we spent on the Appalachian Trail reminded me of my time in California, hiking along Nisene Marks, and my time in New York, exploring and traveling with my brother in the mountains and cliffs. As I trekked back from the trail to return to the Bear’s Den, I felt the fog wrap and embrace me, as if almost a goodbye to the trails and mountains. When I finally left the Bear’s Den for the last time, I knew somewhere in my heart, that one day, I would return to this wondrous place once again.

Have you ever entered a place and felt at home… even if you’ve never been there before? A sense of warmth and hospitality, an aura that welcomes all to stay for a while and sit by a blazing fire with a cup of hot cocoa. The Bear’s Den in Bluemont, Virginia gave me all of those feelings. Ward brought us to an enchanting forest with cabins and inns scattered about, and the Bear’s Den was to be some of our group’s resting place for the night. The hosts there were absolutely lovely. One of my favorite moments of the night was sitting in the living room of the Den with some seniors and listening to Alex make his music. There were hilarious and memorable moments while the song was being made. There’s nothing like seeing your friend deep in his creative passion. What made it extra spectacular was the fact that Alex was making an electronic version of a song that Saniya wrote in seventh grade, so I could feel the meaning that it had to the 12th grade. It was amazing seeing how such a simple thing could connect them so strongly. Overall it was an unforgettable day.

Mountain Rain
Yawning blue clouds shade
in grey the heights as green
rolling hills remember their form
and the hearts they feed.
The rain reaches down and up
like ash burnt souls
gaping for spring.
The angels of wind
pit an unmoving Titan
against the Deus of new. 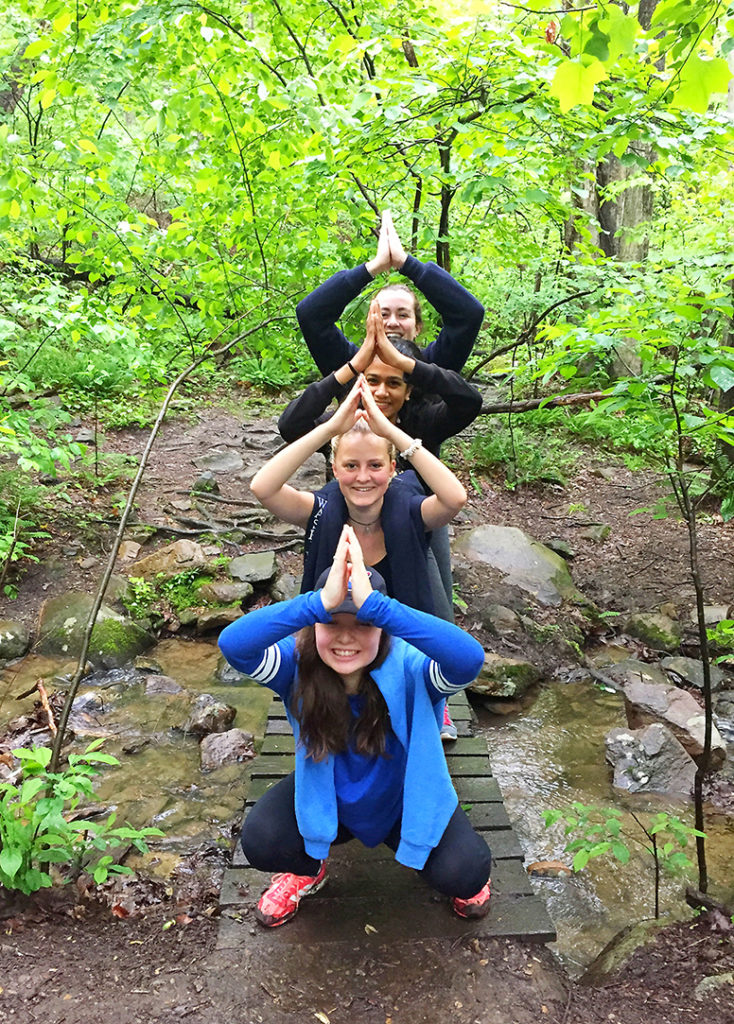