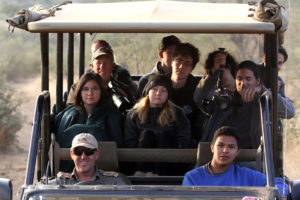 It’s funny how your willingness to do certain things changes depending on the circumstances. Normally, if I had to wake up at 5:30 am to darkness surrounding me I would be groggy and grumpy. But when I had the opportunity to go on a safari and see the beautiful animals of South Africa, you can be sure I sprang out of my bed and got on my warmest clothes. It wasn’t just me who was ready to see the wonderful sights on the early morning excursion. I woke up to the sound of the outdoor showering running and Carl’s pristine voice singing an early morning tune. While Cyrus and I quietly got dressed in the front room, we both looked around at the lovely room we were staying in at the Black Rhino Lodge and he turned to me and said, “This is all sick dude,” with a big grin on his face. After we were all ready to leave, we headed out to the lounge where we met the rest of the group at 6:00 am. We were served coffee and tea before we headed out.

After the ten of us piled into the jeep, the people in the back immediately distributed the fleece lined ponchos, knowing the bitter wind would nip at our faces once we started our long, yet enjoyable, trek. The first animal we saw was the impala. Our guide, Daryl referred to them as the, “McDonalds of the bush.” Even though they’re so abundant in South Africa, every time I see one it still amazes my foreign eyes. They have a glistening coat and long ribbed antlers that twist upward like they’re grasping for the sky. 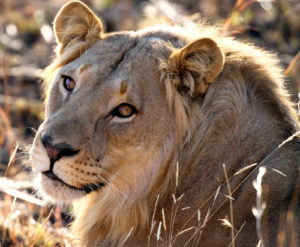 On this early morning safari ride we saw three of the “Big Five.” The “Big Five” include: elephants, lions, leopards, rhinos, and water buffalo. The first of the “Big Five” that we saw was a rhino, specifically a white rhino. We spotted this docile, peaceful creature grazing with its calf. She paid us no mind as we stopped 30 feet to the right of her and talked in hushed voices, marveling at the stout yet powerful beauty of her and her baby. The second animal of the “Big Five” that we saw was the elephant. I never thought I would see so much beauty in something that was so big, grey, and wrinkly. But to me no animal can compare to the massive magnificence of the elephant. I’ve seen elephants in zoos before but something about being so close to one and looking in its eyes made me see the quiet intellect yet brute strength that the elephant holds within it. We saw it pick up small bushels of shrubbery and strip them clean of the bark, their favorite snack. The third animal we saw was the lion. The lions we saw though were on top of a bunch of rocks and camouflaged by their surroundings. Our patient tour guide, Daryl, had to tell us step by step how to see them at least ten times because he could see our untrained eyes straining to identify where he was pointing. It was now that I regretted not bringing binoculars with me. Eventually, we were all able to spot not one but two females and one male that was lying in the sun on top of the rocks.

We also saw plenty of vibrant birds along the way and all had an amazing time. Overall, the elephant was my favorite animal and I’m exceedingly grateful I could see one so close and personal. We arrived and had breakfast waiting for us, quite the way to start a day. 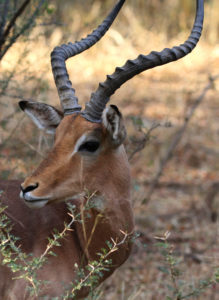 We climbed aboard vehicles that closely resembled those from the Indiana Jones ride in Disneyland. So, I was excited. Only a little way into our journey we heard there was a sighting of a pangolin. Pangolins are basically scaly armadillos and they’re very rare because of the poaching that occurs in South Africa. When we arrived, there wasn’t a whole lot to see because it was flat to the ground and blending in, but moving closer you could see the scales and plates that formed the animal. It was a lucky first outing.

As the sun sank forming a rich orange background we also saw rhinos, wildebeasts, and impalas. Our guide was informative and elaborated on the necessary difference between black and white rhinos, one difference being that black rhinos are more likely to charge at you. Driving right alongside these huge rhinos our guide told us the disturbing fact that an average of four rhinos are killed every day for their horns. It’s sad that I’m seeing some of the few rhinos left. That’s why preservations like these are so important. South Africa has so much natural beauty, and I’ve only seen a small amount of it. Much of this trip has taught me how different it is to experience things for yourself than to be told about them or shown pictures. It was amazing to see these animals with my own eyes and not in The Lion King. I know that even the pictures I take home will never compare to viewing these beautiful animals in real life. 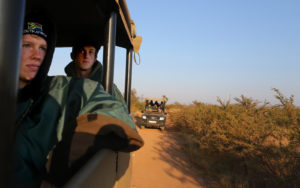 I like nature, probably more than the average person. When I get bored, instead of laying around or watching mindless TV, I’ll watch nature documentaries, with genuine interest. Seeing the animals in their natural habitat, hunting or exploring the ecosystem, can absolutely entrance me. Before I heard about the South Africa trip, I thought I would be stuck with the wildlife of costal California. Now, I can tell you from my own experience that seeing a lion, a cheetah, or even having a standoff with an elephant, will change your perspective on wildlife around the world. Waking up at 5:30 in the morning, getting in a 10-person jeep, and driving through blistering cold air at a speed known as “Ferrari safari” to see giraffes, is 100% worth it. These are animals that barely anyone can say they’ve seen in person. On television, you don’t get the real scale of these animals, the raw power an elephant uses to push over a good-sized tree. Then using its massive trunk, eat branches with the sharpest spikes like it’s mashed potatoes.

Some days, it would be bland, in comparison to the other safaris. You would see a wildebeest far off in a field, or one zebra on the side of a hill. Then, there would be the days where you would see a male rhino try and take on a female rhino and its kid, drive farther in the reserve, see three lions lounging around not ten meters from the jeep and on the way back see 15 mongooses bound across the road in a small herd. No matter what we saw on the safari, it would still be fun because I would get to hang out with my classmates and our Afrikaans jeep driver named Marcus. He could teach us something new about almost every animal and plant we came across. Whether it was showing us which plant could clear up congestion or debunking National Geographic, his knowledge of the world was always useful. I never thought I would be able to see these animals past my TV screen, but now I have memories that I won’t forget for my entire life. This was the perfect way to end the trip.