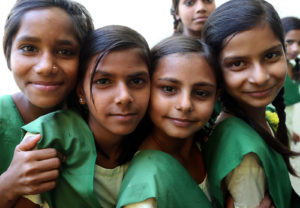 India thus far has been an experience. Just three days into the trip, we’ve shopped in the markets of Old Delhi, rode through rural India, and visited with the bright-faced girls at Pardada Pardadi. Each and every event becomes my favorite in terms of the pure joy I experience, and adds to my excitement as we move along. As I sit and type, we are heading back to the YWCA, where I will enjoy a brief respite after yet another hot day. It is incredible how Indians can function in this scorching heat, and be so kind to us as we experience their culture. Each and every thing that I see in this country both amazes and baffles me. How is it that they can drive without any set of rules and get from point A to point B unscathed? Or support a family on 30 rupees (less than 50 cents) a day?

To us westerners, their lifestyles are difficult to fathom. Nevertheless, my class can find common ground with the people we have met in more ways than one. The girls at the Pardada Pardadi school were eager to get the most out of their education because they knew what an amazing opportunity they were given to attend such a school. Also, just like us, they enjoy singing and dancing, which we saw when participating in an impromptu dance party. All of us made new friends, and I personally would return to help in the school if given the chance. The love and acceptance that we all felt, regardless of cultural differences, draws me further and further toward India. It truly is a beautiful place, and I am very happy to know that my visa is valid for another 10 years.

As soon as we pulled through the gates of the Pardada Pardadi school we were welcomed by a crowd of smiling girls, in bright green uniforms. As I walked toward them I was greeted by a beautiful young girl names Jassi. She smiled saying, “Hello ma’am! May I please ask your name?” At first I was taken aback by how polite her greeting was but this would come to be the welcoming salutation I received from countless other girls throughout our visit. As we sat for an introduction from the founder of school, Jassi and I continued to exchange smiles across the room. As we exited the room she took me by the hand and said she liked my smile. I blushed, returning the compliment. 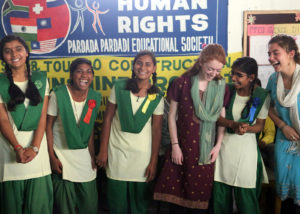 We were led around the school by a group of girls who showed us numerous classrooms filled with students. At one point, we walked into an open courtyard that contained swing sets and slides. The yard was teaming with young girls in Pre-K and Kindergarten. I hopped on the swings as the elder girls giggled at my childishness, that directly contrasted with their disciplined politeness. Soon the he girls began playing a game with a ball that I wasn’t familiar with. I watched as I pushed two little ones on the swings.

As we continued our walk, I returned to Jassi. I was amazed by her spunkiness. Every word she spoke was accentuated by some little movement or facial expression to play up the drama of her sentences. Although all of the girls spoke basic English Jassi spoke quite eloquently, with a noticeably larger vocabulary. Later on I told her I was interested in chemistry. She quickly pulled me away to show me their incredibly impressive Chemistry Lab. I felt her light up as I peered into the cabinets to read the labels on the bottles of chemicals. After a bit, we joined my classmates and the other girls in the main room of the school. There we chatted and sang to each other. We bonded over our mutual love of music. Although neither party knew what the other was singing we listened to the melodies and smiled in appreciation of the songs. 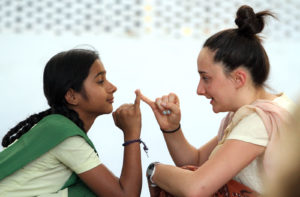 After our ice breaker games, we were ushered to a classroom where we turned on music and began an impromptu dance party. The girls danced beautifully with a grace and elegance that greatly contrasted with the jumping and fist pumping that we usually call dancing in the U.S. It was nearing time for the girls to go home, so I said goodbye to Jassi and she made me promise that we would see each other the following day. I promised and we hugged goodbye.

When we arrived the following morning the girls were eagerly waiting for us in front of the school. I got off the bus, immediately hearing Jassi’s voice calling my name. She ran over to me with another girl named Anu. They both rushed to tell me that we would be going to their village that day and would get to go to their houses to meet their families. Jassi told me that she had told her mother all about me and that she couldn’t wait for me to see her home. We got back on the bus and in a few minutes we had reached the village. Anu and Jassi grabbed my hands and began leading the group through the village. We stopped at one of their teacher’s house who is currently on maternity leave with her three-month old daughter. The family quickly began moving furniture around to make a place for everyone to sit. They served us tea and biscuits. I sat holding the baby, marveling at the difference in hospitality between the U.S. and India. 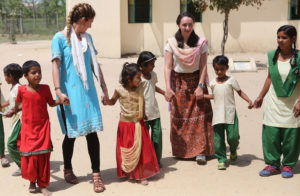 After tea, we continued to Anu’s house where we met her family. Her beautiful mother greeted us warmly and introduced us to their buffalo who was laying in the courtyard. Anu showed us the way to the roof where we could see the tops of the other houses in the village. We continued on toward Jassi’s house and she urged Anu to run ahead to make sure our welcome was ready. Jassi looked at me and put one hand on her face. She explained that she was worried and embarrassed because, unlike Anu’s, her house wasn’t cemented. I assured her that it would be beautiful regardless. She pulled me ahead of the group and ran to the front of her house. Her sister greeted me and Jassi introduced me to her mother. She gave me a hug while Jassi’s sister asked me about American culture. Her little brother sat next to me and Jassi said that he was going to walk with us because his school was on the way back to the bus. I held hands with both of them as we walked off toward the road. We passed a grain field and Jassi turned to me with a gigantic smile. “This is my field and this, this is my water pump,” she stated with pride. She skipped over to the pump and moved the hand up and down twice, producing a steady stream of water. She asked me if I liked it and I told her it was amazing.

After we returned to the school we had a short activity and then it was time to go. We loaded our bags onto the bus and huddled up for a group photo with the girls. Everyone embraced their new friends. Jassi and Anu grabbed my hands. Jassi asked me to stay longer, though she knew I couldn’t. Tears welled up in my eyes as I hugged the two girls. We stood for a few moments putting off my inevitable departure. Jassi promised to never forget me and I promised the same as I climbed onto the bus, with tears now streaming down my face. I looked out the window where Jassi and Anu stood with similarly tear stained cheeks. As the bus pulled away we waved goodbye to each other and I watched as the whole crowd of girls marched back toward the main entrance of the school. I have only known these girls for a little over 24 hours yet I made connections as strong as those that I have with friends I’ve known for years. I had no idea when we first pulled through the gates at Pardada Pardadi that I would leave with a new kind of love in my heart, and an appreciation for the openness of a young stranger.