Today a former political prisoner gave us a personal tour of Robben Island. This tour had more significance to me than something like touring Alcatraz. You can add up the deaths and conditions and conclude that suffering occurred, and even sympathize with those who were there. But no matter how bad things may look on paper, to me they never really seem real. I cannot empathize with something that I have no personal context for. However, with our guide, Thulani Mabaso, this was quite different. When we entered a room, instead of seeing it as a famous landmark or place an important event occurred, he made it personal by sharing at least one story of personal abuse. He also shared stories with us about the formation of the post-apartheid South African government. I finally understood all the suffering I had been reading about for so long. It was no longer written on amoral paper or seen on far away news. I understood the scope of the tragedy that took place. Several times while recounting stories of his abuses, he broke into tears. This kind of realism struck home. 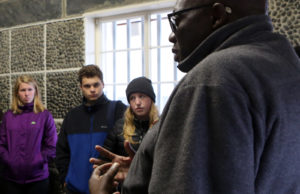 Toward the end of our tour we interviewed Thulani in his old prison cell. This added another layer of realism to our experience. Every time he spoke of educating himself, helping to keep everyone in their cell united in their struggle, or some form of psychological abuse, he could point to the exact locations where those events took place over two decades ago.

During the interview, Thulani started by telling a summary of his life story. At a young age, he and his family were evicted from their affluent tribal lands and forced by the apartheid regime to live in a massive shanty town. He could not stand the conditions his family was forced to live under and so he joined the military branch of the ANC. He had to leave the country to go train in Swaziland. After he detonated a bomb in a government building he was captured and sent to Robben Island prison for 8 years. To get him to confess, the police brutally tortured him and forced him to tell the doctor that fixed his broken bones that the government did nothing. While on Robben Island he was a highly active member of the ANC resistance movement. While in prison the ANC educated him and he learned many leadership skills. In prison, he had a hand in building the exile government. This later transitioned into the real governmental hierarchy following the release of their leader, Nelson Mandela.

I was struck by the fact that even though Thulani is now a free man, he is still dealing with the pain dealt to him all those years ago. 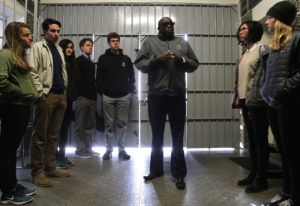 Today, we went to Robben Island to take a tour of the prison in which Nelson Mandela had been kept for 18 years, among many other anti-apartheid leaders and activists. Our tour guide was Thulani, a former member of MK (the military branch of the African National Congress), who was imprisoned for 8 years in Robben Island for setting off an explosive in a SADF post, injuring 57 South African military members. Thulani’s tour was nothing short of intense. He began by leading us into the entrance and emphatically slamming the door behind us, which startled all of us a little, but effectively got our attention. He showed us a few different rooms, describing the horrific things that had been done to him and his fellow inmates in each room. While his words were extremely powerful, his voiced remained calm as he told us his story. He showed us the room where he found out that his father had been shot 8 times by South African Security Police. His father was going to visit him that day, and hadn’t committed a crime, but was shot anyway. This was one of many eye-opening stories we heard throughout the tour. I had known of stories like this before, but something about hearing it directly from a man who I was watching with my own eyes, in the place where it had all happened, made the suffering so much more tangible.

As Thulani led us through dreary grey hallways lined with narrow cells, and dusty courtyards trapped within looming stone walls, I could see that he was walking through his own past, watching old experiences unfold around him as if he were still trapped behind those bars. I can’t comprehend the strength it must take for him to be able to go back there as often as he does, reliving the unimaginable suffering he endured for so long. Maybe he needs to relive it in order to live with it, but whatever the reason, he lived through it, and I’m incredibly thankful that he could share his story with us. 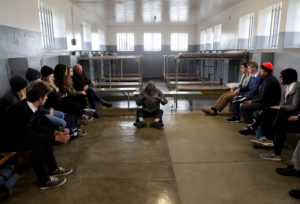 When Ward first opened up the floor for questions after hearing Thulani Mabaso speak, we paused. It wasn’t that no one had anything to say, but there we were, sitting on benches inside the cell where this man had spent eight years of his life. He laid prone on the floor to re-enact the positions in which he had been held and tortured by the police. The corner behind us was where he kept “one eye open” when he slept, to make sure no one poisoned the water that he and his fellow inmates drank. There were millions of questions, but which ones were okay to ask?
Our assigned reading for this trip provided an account of the horrors people, particularly members of the ANC, faced. However, as we were guided through some of the most vulnerable moments within the life of a man we had just met, I couldn’t help but feel way in over my head. Within these cement walls with chipping blue paint were bits and pieces of an experience he could never forget and we could never fully comprehend.

Finding beauty in hardship is pretty cliché, but after speaking with Thulani in that cell crammed with rusted bunk beds and barred windows, simple concepts such as this once again feel meaningful. Thulani survived a system that was meant to break people, then returned to his former prison to educate others about it. He was not afraid to express emotion or admit pain. He was able to see the humanity in guards, and is friends with one of them to this day. He participated in the formation of a new government.

Participating in this meeting confirmed to me that reading isn’t going to fully prepare me for this trip, but the sense of curiosity and willingness to ask questions that Ward and Shannon have been trying to cultivate in the Values classroom this past year will.