Throughout our interviews with various leaders, I have noticed repeating patterns in how they relate to us. You have spirited and cheerful leaders like Layli Miller-Muro and Congresswoman Loretta Sanchez who went out of their way to make us feel welcome. Then you have solemn and wise leaders like Congressman Dennis Kucinich who deliver inspiring words of advice to prepare us for the future. It seems to me that Robert Zoellick is a mixture of the greatest things about everyone we have interviewed. 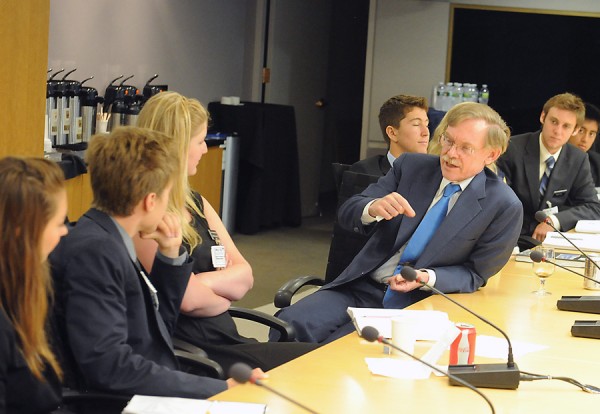 When Robert Zoellick, president of the World Bank, walked into the room, he insisted on shaking everybody’s hand before he sat down. When we presented our questions he made everyone say their name, grade, and career goal before he answered. But when he answered them, boy did he answer them. He answered our questions with an analysis and complexity unlike anyone I have ever seen. I knew we were in for an incredible experience when he responded yes, to Kavi’s perennial question about whether self-interest is the best promoter of change. His answer wasn’t fiery. It was calm and calculated, and etched with worldly wisdom and experience. One of the most striking things about Mr. Zoellick was that he had a solid sense of what he believed in, and his ethics were developed from his own personal experiences and knowledge. His ethics were entirely his own.

Robert Zoellick made for an extremely striking interview and the World Bank will definitely be losing an extremely capable individual.

This morning we interviewed Robert Zoellick, the president of the World Bank. We came with prepared questions, but Mr. Zoellick had questions for us. Before each of us would ask a question, he would ask us what we were interested in and what grade we were in. Mr. Zoellick’s questions went beyond simple pleasantries because after each person told his story, Mr. Zoellick had something to say about each person’s interests. This not only displayed his wide array of knowledge about humanity, but also his interest in people. He had encouraging words for everyone.

At the end of the interview, we began a process we had done in several other interviews. We feed back to Robert Zoellick what had struck us from the interview. He added to the conversation by asking us what we had learned from our trip in general. I liked how he had something to say about everyone’s take away. His interest in us as people was clear from his thoughts and the fact that he stayed to talk to us for an extra hour.

Mr. Zoellick’s admonishment that we share about our entire experience in D.C. proved to be one of the best moments of the trip. Every single person shared what he felt he had learned and what he wished to do after high school. Even though my classmates only spoke for 3 to 5 minutes, I felt that my knowledge about everyone and what makes them tick expanded. I also saw Mr. Zoellick’s inclination towards leadership. He was able to facilitate a conversation about our dreams. This was a valuable conversation because, besides being interesting, it was inspiring and motivating to hear my peers’ dreams and voice my own hopes for my life. Our interview with Robert Zoellick was a conversation about what this trip means and how it can affect our lives. 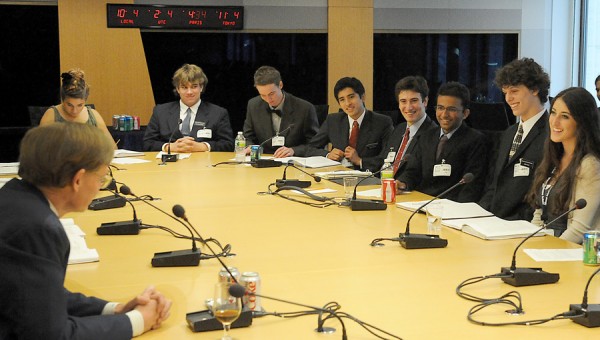 When he first entered the room, Mr. Zoellick took the time to walk all the way around the table and shake hands with every member of our group. He ended up staying an extra hour with us to ensure that he got all the way around the table asking us what grade we were in, what we wanted to do, and what we had taken away most from our time in D.C. Mr. Zoellick remembered our names and what we wanted to do with our lives and continuously found ways to reconnect our aspirations to what he was talking about.

During many of our interviews, we have asked a question about whether or not self-interest is the strongest motivator for ethical behavior. Each time we asked it, we heard an emphatic no. Robert Zoellick was the first person we interviewed that answered it in the affirmative. He said that he thinks that self-interest is the strongest motivator, but that self-interest has acquired a negative connotation. He said that nowadays people tend to interpret self-interest as selfish interest but that they are two different things. Mr. Zoellick said, “Good ethical behavior will lead to economic development.”

Our interview with Mr. Zoellick was powerful and interesting and made me completely reevaluate what I want to do with my life.