After a long, smelly train ride from Delhi to Haridwar, I was relieved to finally get off and breathe some fresh air. While boarding the bus, I wondered what this place that we have been told so much about would actually be like. I have only heard amazing things about Sri Ram Ashram, and I have anticipated coming here since 6th grade. As we drove from the train station to Sri Ram, we were told more about Haridwar and the Ashram. Shmuel pointed out a statue of Durga where one of the children of Sri Ram Ashram was found. As they opened the gate we saw several of the children waiting for us, smiling and waving. After we had our orientation and settled in a bit, we played with the children. I pushed a couple of them on the swings and as we sat down together I met Puja.

Puja is new to the ashram so she knows very little English. I asked Puja her name and after she told me I tried asking what she likes to do for fun. She told me that she doesn’t speak English. This left me pondering the best way to engage with her. I put my hand out hoping that she might understand that I wanted to play a hand game and she did. Puja placed one hand on top of mine and the other underneath my other hand. She used the hand that was on top to slap my hand as she exclaimed, “January.” I was excited because this was a game that the Pardada Pardadi girls had taught us. We went through the months and I lost every time because it would land on me when we got to December. Other kids joined in and we played until we went on a tour of the ashram.

Puja grabbed my hand and she led me ahead of the others. She would point at the trees and say, “Peach! Mango!” or other fruits that I can’t remember. We didn’t talk much, as we could hardly understand each other. We counted to 100 together; I don’t know how it started or why we did it but Puja had fun. I had to figure out ways to make her laugh without talking. She really liked it when I pretended that my finger was a bee chasing her. Puja tried to teach me a strange version of hopscotch that she was very good at; I was not. This morning we were counting again as I pushed her on the swing. Despite the fact that there were other kids that spoke more English, Puja was the one that I felt the deepest connection with. This experience has taught me that language isn’t the only way to connect with people and build relationships. 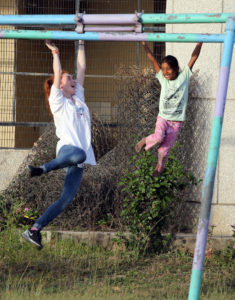 “Come, Didi!” Sita’s small hand was suddenly in mine. She ran up from behind, pulling me toward the rest of the group. Her dusty feet were much faster than mine but I welcomed the challenge of trying to catch up. As we walked with the group, still hand in hand, she pointed to a row of flowers that lined the path. She looked up at me and I could see her thoughts swirling as she tried to remember the English word for flower.

“Yes, Didi! Red, orange, pink, roses!” She called out the color of every flower we passed, showing obvious excitement, and being sure to never miss a single flower.
Sita turned to me and pranced over to another patch of flowers. “You now!” she exclaimed as she pointed to a bush full of red roses. After I called out the color, she simply nodded and moved on to the next bush. “Orange?”, another nod.

We played for the rest of the day, until bedtime, when we were forced to go our separate ways. The morning after, I sat on the concrete stage drinking warm masala chai and watching the kids play a version of hopscotch that I wasn’t familiar with. I spotted Sita for the first time that day and she was scampering straight toward me. Upon reaching me, she took out a pink rose from her pocket. “Pink, Didi.” She placed the pink flower in my ponytail and nodded, just as she had the day before.

“Thank you!” Sita smiled and turned to a nearby bush. “Red!” she pointed to the flowers, then quickly returned to playing hopscotch with her brothers and sisters.