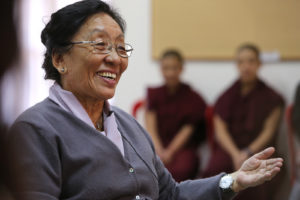 Today was my first day feeling fully recovered after a brief spell of dehydration. I am so happy that I was back for today because it was probably one of the best days of my life. I cannot imagine a life where I do not return to McLeod Ganj. I love waking up to look out at the incredibly beautiful Himalayan Mountains dotted with colorful rooftops. It’s also nice to be surrounded by the Tibetan culture which more familiar to me. It’s comforting to be surrounded by ringing bells, chanting, and flowing vibrant red and yellow robes.

We started off our day with our first interview of the trip, Rinchen Khando. Rinchen Khando is the leader and founder of the Tibetan Nuns Project. As soon as she began talking she became my role model. She spoke beautifully about the value of educating women just like men. She said that in the beginning there was talk of offering the nuns an easier scholarly path, littered with concessions like a lower passing grade or an easier textbook, but that we should take no concessions, because it is important for the welfare of society that women and men are educated equally. She said that when women and men are taught the same it will be easier to stop seeing the distinction between the two, and simply view everyone as human. I thought this was powerful, especially coming from a culture where traditionally nuns could not receive a Ngagrampa degree, only monks could. 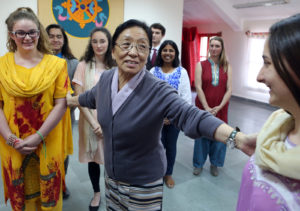 What struck me personally was when she answered the question that I asked, she answered and looked at me with raw attention and care, as though I was one of her family members. I asked her about the importance of art in her work, which is relevant to me because I intend to pursue art and animation in the future. She said that art is so influential, and that with animation, I could really distribute my message and make an impact. She talked about its relationship to journalism, and how there are artists and journalists who can be told to create information for the sake of money, bribery, or other reasons. But she said that if I do not do that, if I stick to my own wisdom and my own truth, then what I create will be powerful. She made me realize that by going into art, I am not just going into an uncertain future, I am going into a life where I create art that is a force to be reckoned with. At the end of the interview, after we took a group picture, she turned to all of us and said that when she looks at us, it is as though she is looking at a group of Tibetan children. In that moment I honestly wanted to walk out with her, ask her to mentor me, and follow her for a few years. Meeting her was truly inspirational and I am eternally grateful for the experience.

After waking up to a big storm and no power in the hotel, we struggled to get ready for the two interviews we had lined up today. With no internet and no printer, our interview questions for Samdhong Rinpoche were polished and printed while we ate lunch at a nearby restaurant. We rushed through our meal and in no time, he was walking around the room shaking everyone’s hand. 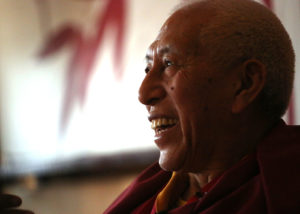 Samdhong Rinpoche thought long about our questions before giving us his detailed, eloquent answers, pausing every once in a while, to ponder or gather his thoughts. Although almost everything he said had extreme depth and struck me in some way, I was especially interested when he spoke to us about the concept of non-violence. He told us that non-violence as a strategy is not true non-violence. This is very similar to John Lewis’ belief that you can’t turn non-violence on and off, it is a way of life. I began to think more deeply about this and was reminded of the Dalai Lama’s book, Ethics for the New Millennium. In his book, the Dalai Lama speaks of suffering, and specifically how sharing in another’s suffering can in turn, alleviate your own. However, sharing in another’s suffering for the sole purpose of alleviating your own is not truly sharing in another’s suffering, therefore, your suffering is not alleviated. This is similar to what Samdhong Rinpoche was telling us because by using non-violence as a strategy, you are using it for the sole purpose of getting something you want, rather than for the purpose of living by the non-violent belief.