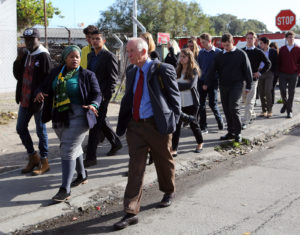 After our morning visit to LEAP School, we departed for a tour of the surrounding township, Langa. Langa’s appearance was like that of Khayelitsha: people living shoulder-to-shoulder in small houses made of corrugated metal, concrete, wood, old shipping containers and any other resources available for such a purpose. Our guide from LEAP School told us that many of these houses lacked running water, which led to sanitation issues. Furthermore, their proximity to one another means there is always the possibility that a single fire outbreak could rapidly spread, destroying countless homes, a threat that is further exacerbated by the scarcity of water.

One of our first stops on the tour was a former hostel. During apartheid, buildings such as this housed migrant laborers from the so-called “homelands,” who were forced to live away from their families while working in the townships. Today, these buildings are still used for housing and, despite the abolition of apartheid over two decades ago, they continue to afford their residents little in the way of comfort. The one we visited was a two-story brick building which was divided into several sections, each of which could be accessed by a separate door on the outside of the building. The tour brought us into one of these sections, which consisted of around six rooms with a single bathroom at the far end of the building which the residents shared. As our large group filled the room, I started to become aware of the unusual nature of our visit. This was not some exhibit at a museum, it was somebody’s home. I could see residents in their room through a door left ajar. People were making their way in and out of the building, avoiding the gaze of this group of strangers. I began to feel a creeping sense of guilt. It seemed as though we were intruding on their lives, and I could imagine how they saw us, a group of rich Americans, here to gawk at their poverty. 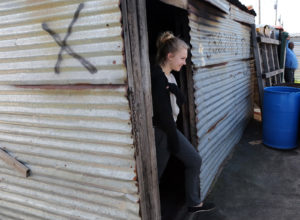 I thought of how angry I would be had our circumstances been reversed. I kept these thoughts in mind as we continued the tour, which brought us into one of the rooms in this section of the building. The room was relatively small by most standards, and couldn’t have been much larger than 8 feet by 12 feet, roughly the size of a modest American bedroom. But this was not a bedroom. There were two beds piled with folded clothes on either side of the room, between them a mere 2-3 feet of space. Next to these beds was a small television set. Beside the door, at the foot of one of the beds, was a small refrigerator, on top of which sat an electric stove. These two appliances made up the room’s kitchen. Our group filed in, almost completely filling what little space was available. On the bed opposite the door sat an old woman. Seeing her made me feel worse. What did she think of our presence? Once again, I felt like I was trespassing. The guide asked her how many people lived in the room. She replied that ten-people lived there. I began to imagine how ten people could live together in such a confined space. The members of our group in the room, numbering somewhere around 17, had to stand shoulder-to-shoulder with one another. I couldn’t see that ten people would be much more comfortable. I then thought about the other five rooms in this section. If they each held the same number of occupants as this one, that meant that around sixty people lived here, all sharing a single bathroom. The guide then asked the woman how long she has lived in this building, to which she replied forty years, more than two times the time that I’ve even been alive.

To live in these conditions for so long is something I’m not sure I’m even capable of comprehending. This information was not lost on me, however. The message was clear: this life is all the woman has ever known. It’s all anyone in the township has ever known. This is a sobering thought. Cliché though it sounds, in our country we often take the things that we have for granted. Though it was difficult see the things we saw in Langa, our visit there taught me a very valuable lesson. For the first time in my life I could see the privileges that life arbitrarily granted me simply because I was born in California rather than Langa or Khayelitsha or Soweto or Tembisa. As we go about our own daily lives, it is important to remember that for countless people around the world, “daily life” is a struggle for survival amidst circumstances which we in America cannot even begin to understand. Therefore, although I may have looked the part, I feel as though I wasn’t just some tourist gawking at poverty in Langa. I believe that what we saw in Langa was an example of all the good that has yet to be done. As Ward put it, there is an immense amount of inequality in the world, and it is everyone’s obligation to try to make a difference in any way possible, that we may push the world to a better future. 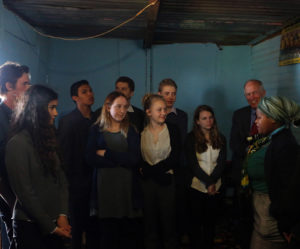 My first reaction when I learned that we would be going into a township was one of anxiety because I did not know what to expect. I had observed, from a distance, the abject poverty experienced by the inhabitants of the townships the day before on our visit to Philani. Every time we had been in or near a township previously in the trip, we were inside a gated compound. But as has been so common on this trip so far, my expectations were absolutely shattered. We were first taken in vans to the heart of the township, and showed a shop. It was explained to us that many of the shops are built in shipping containers so they can be more easily moved if business is not successful in one area. This struck me as interesting because it added to my notion of just how volatile and hand to mouth these people’s lives are. We then walked down the path past a butcher shop, a small shack with a fire pit and a bag of sheep heads, and then proceeded to see one of the hostels set up by the government. In these hostels, there are often three families to a room, and no privacy whatsoever. We walked into one of the rooms and spoke to a woman who had been living in that room for 40 years. She told us that ten people lived in this room that was no more than 3×2 meters. Being able to actually go into these homes and meet the people living in them allowed me to experience what their lives are like. Lastly, we walked to the informal housing, the shantytown section of the township consisting of non-government tin shacks, and visited one to see what they were like inside. We also visited a brewery of traditional African beer and learned about the beer’s significance to the culture, as well as the process by which it is made. After today’s experience, I feel like I have a far deeper understanding of township life than I did before. It is one thing to read about it, and a completely different experience to be immersed in the township itself. This experience has definitely made me reflect upon what a privilege it is to have privacy, and to be sheltered from the elements. However, the township’s people are far from letting suffering consume them. Everyone I have met, from the little kids at Philani, to the kids our age at the LEAP School, have an aura that cannot be ignored. They are loving, cheerful people, and face their respective situations with dignity, courage and joy. I cannot wait to further connect with these wonderful people as we continue our learning journey.