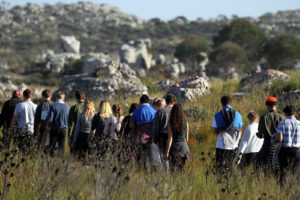 In the morning, the first thing that we did was take a hike with one of Ward’s longtime friends. The area we were hiking in is one of seven distinct biomes found in the whole world. This biome is only found on a small strip of peninsula right on the Atlantic coast of South Africa. To put this into perspective, the most of Russia and Europe is only one biome. Needless to say, this hike was a unique experience. In addition, due to an extreme drought in South Africa, we could hike in an area that is normally underwater.

On our way to the top of the hill, overlooking the reservoir, we came upon a valley that has a unique past. It is called, “Lost Horse Valley” by the locals. Apparently, with great frequency, during the full moon horses escape from their paddocks and congregate there. The locals believed for a long time that there was a lost herd of wild horses that no one could find. When they consulted local ranchers, after one such event, they discovered that the horses broke out and returned the same night. No one knows why this happens and it is still going on according to the locals.

When we got to the top and saw the sorry state of the reservoir, we understood how dire the drought situation really is. At what used to be the bottom of the reservoir, there is pure white sand that looks and acts like snow. There are hills that clearly used to be islands, that now one can just walk to. This baffled me. Where there wasn’t sand there was a layer of primordial ooze that was almost too slick to walk on. What water was left was a dark orange or brown. I walked all around and discovered the remains of a building. Time had taken a hand to it, but I was fascinated by what its history might have been.

I have loved hiking from a very young age. This trip showed me that I could explore outside of my own country. There is much more adventure out in the world than I had previously thought. I got talking to our guide and found that even though they have many protected camping and hiking areas, almost no locals use them. I learned that there were many hikes that can be done all over Cape Town. This has captivated my imagination. All I can think of is how I will return and live my dream adventure during some college summer. I am looking at everything around me as a future opportunity, and planning for my trip. I want to come back here so badly, and I have not even left yet. 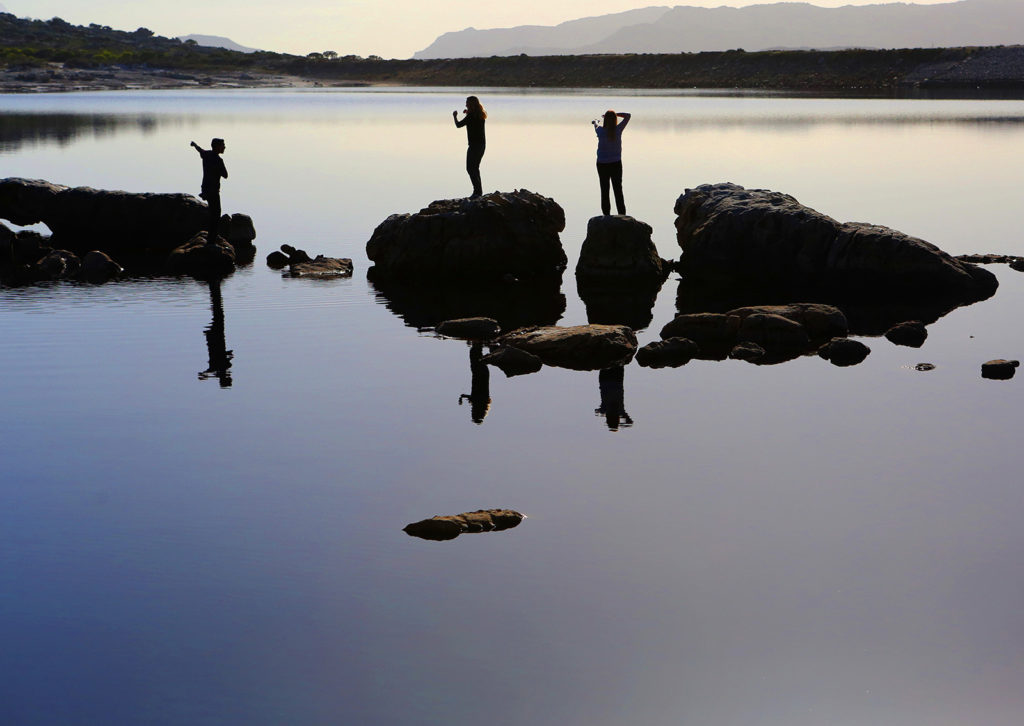 I’ve never really considered myself to be much of a singer or dancer, and after the mind-blowing performance our class witnessed at the LEAP School, I felt a pit of dread forming in my stomach as we stepped into the Norman Henshilwood High School auditorium. 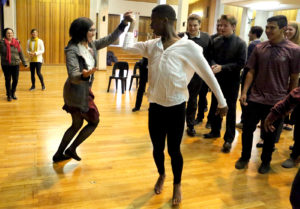 To my relief, our performance went as planned and we were well received by our audience of around thirty students. I felt myself relax, ready to enjoy their singing and dancing. Little did I know, even though we had stepped down from the stage, we were not yet safe from the “performing arts.”

After we performed, a band made up of Norman Henshilwood High School students started performing popular contemporary South African songs and Jordan began to dance with a few of their students. This inspired the Norman Henshilwood High School students to try to get all of us to start moving. Between enjoying the song playing and watching a funk circle form around Jordan, I did not have time to consider whether I agreed with them or not. Swaying slightly to the music, with my hands shoved in my pockets, I saw that some of the Norman Henshilwood High School students were beginning to drag Mount Madonna kids onto the floor to dance. I didn’t realize that I had been selected until my hands were yanked from my jacket and I found myself spun onto the floor. Unable to find a way out of this predicament, I gave in and shuffled my feet alongside a student’s fancy footwork. As the music continued, I felt myself becoming more and more comfortable with my arrhythmic, clumsy attempt at “dancing”—I felt myself starting to have fun.

Later that day, I apologized to the student who had danced with me because he had unwittingly chosen the least coordinated person in my entire class. He explained to me that dancing in its earliest stage is more about moving along to the music and having a good time, and that if you keep dancing, no matter how bad it is, it has the potential to develop into something good. Or if not, at least you’re enjoying and expressing yourself. I was shocked at how nice he was.

The confidence these students had to fully invest themselves in their performances and express themselves creatively inspired me, and their ability to not judge or mock me and my terrible dancing was a very pleasant surprise. These kids, who chose to stay after school to interact with us, were passionate about what they did. They wanted to share an experience with us, not out-perform us, although they totally did. Even though I started the day somewhat apprehensive about singing and dancing, I had a fantastic time at Norman Henshilwood High School. Saying goodbye to the students was bittersweet; we all exchanged memories and Instagram handles, but we also knew we couldn’t take them with us (though that didn’t stop us from trying; we tried to hide one of the girls in our van).