The Streets of Delhi

The bus trip from our YWCA lodging to Kingsway Camp was one of the first cultural shocks that I have experienced since coming to India. The bus simply owns 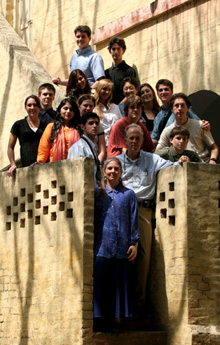 the road, driving straight and aggressive, in a sort of constant bluff saying “I will run over anything that doesn’t yield.” Motor and bicycle rickshaws travel in groups everywhere, and in India honking is the preferred way of announcing your position and thus saving your life. To my right an open-backed truck passes, holding what looks like the local Delhi SWAT team. Cows are positioned in random places along the road; one is lying down in a small patch of grass in between several lanes of busy traffic on both sides of the street. A small scooter is pulled up next to five or six other ones, but this one is slightly special. A young boy of about ten is sitting in his father’s lap as his father drives and the mother is perched precariously on the back of the scooter, holding a small child She’s holding it casually, with one arm, apparently without even the thought that the whole enterprise is slightly dangerous. Might I mention that the only one wearing a helmet the driving father? A small village is created at each stop light due to the large amount of people amassed. A young man walks among the scooters, rickshaws, cars, and buses selling slices of coconut. The light turns, and the man deftly dodges the chaotic rush of Delhi traffic. An elephant is chilling on the side of the road, and I am forced to wonder how such a large, slow, animal is able to negotiate an area where space is at such a premium. There are a ridiculously huge amount of walls and fences in Delhi; it’s almost as if everything is broken up in some kind of indirect effort at deterring the ease of travel and freedom of movement. We finally approach Kingsway Camp and the Gandhi Ashram, the area and group of people dedicated to celebrating Gandhi’s life and achievements. It’s been quite an immersion in Indian culture just in our first 24 hours, and I can’t wait to see what else this wild country has in store for me.

And then there were the vikrams…

Life of an Orphan

Passports, visas, curriculum, clothes, packing, everything went by so fast. Even the plane ride, the takeoff, landing, just the whole thing – it was fast. But as soon as I came out of airport it felt like the Earth had stopped. The people here just don’t have the urgency to run after life like they do in America. They don’t rush to do anything. Simplicity in living is everywhere. For example, yesterday we went 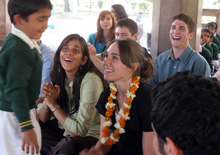 to Kingsway Camp where the Harijan orphans board and are educated. Harijans are the lowest class in India. They are the neglected and street dwellers. It was really sweet because when we walked into their boarding school’s courtyard, they all yelled “Welcome!” at the top of their lungs. It reminded me of the days when I was one of them and would get really excited when somebody came to our orphanage. The students invited us to sing prayers with them. We had our lunch while they all went to the Gandhi kutir where they do their prayers 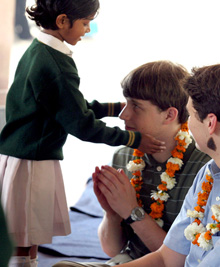 and also where Gandhi used to sleep. We all walked towards the kutir and saw all the shoes beautifully lined up. The fact that I was in India hadn’t really hit me, but when I walked up and saw their faces, my heart just melted. They all started to sing their prayers and that was the moment when I lost it. I saw the faces of these orphans full of life and happy to see us. They had nothing, but in a way had everything. The prayers they sang were the prayers I used to sing every day. I think they were surprised about the fact that I knew the words. Just those 15 minutes with the Harijan orphans were precious to me because I am one of them. They have been given a home, a place to grow up with love and education. I had the sudden realization that the opportunities I’ve been given, my education, my community, my caregivers are incredibly valuable to me.

During the second half of our stay at the Gandhi Ashram, we were blessed to have an audience with Dr. Nirmala Deshpande, also known as Didi (big sister), who was a follower of Gandhi. She was a disciple of Vinoba Bhave, Gandhi’s spiritual heir, and the man who took over Gandhi’s work after he was assassinated. She walked thousands of kilometers across India with Gandhi’s movement, giving land to the landless. She had a lot of wisdom and experience to share with us. 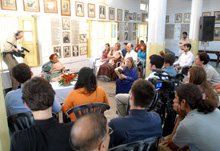 The interview for me was a pure joy to experience. She had something special to bring to the conversation that few people can. Her experience with Gandhi and Vinoba Bhave was inspiring and incredible to hear about. The many amazing things she had seen and done in her life gave her answers to our questions a certain depth and understanding. I asked her a question that I had asked others concerning our project. The question went something like this, “Part of our work with Project Happiness is trying to make our material accessible to as many people who want to take part. This accessibility includes opening the project to people regardless of religious or spiritual differences. With all of your wisdom and experience, how do you think this can be accomplished?” In her answer she focused on prejudices. She posed the question “Have you ever seen small children playing together?” Her point was that children have no concept of religious differences. They do not think about all of the reasons they should not play together due to conflicting values or beliefs. All they think about is the present moment and just playing. While she was talking, all of the sudden I had a major moment of discovery. For this project, I’ve been working to meet people at as deep a level of thought as I can. I’ve been trying to find gems of profound wisdom in all facets of our experience and I found it in her dialogue. I never thought that the answer could lie in pure childlike innocence. It gave me joy to think that in order to make our project accessible, we may have to invoke our childhood experiences, remembering our innocent bliss playing together in with no prejudices conflicting with the present moment, no complicated thoughts interfering with simply existing together in harmony.

I am very happy to have talked with Nirmala Deshpande. She gave me a new insight on this project and showed me that sometimes the answers to life’s tough questions can be as simple as getting back to our most innocent forms and letting our experience and pure instinct lead our responses. I thank Nirmala Deshpande for sharing her wisdom with us and feel that I have been given a true gift of knowledge through the experience.

There’s nothing I can write, or even a photograph that can encompass how vastly different India is from where I’ve grown up. I can look out the window of the bus at any given time and see something that resembles nothing that I’ve ever seen before: cows strolling down the sidewalk (if it can be called such, for it’s not always paved) and rummaging through the garbage for a bite to eat. As I ride through the innermost part of New Delhi, I continue to look for that perfect shot on my camera that will embody everything new and exciting about India, but I can never seem to capture the essence of the scene, let alone the essence of the country, which I couldn’t even begin to profess to understand. And yet, everything I see still makes a profound impression on me. The contrasts are stark.

The obvious truth is that New Delhi is nothing like California, but beyond that, one block of New Delhi can be nothing like the next. Government buildings or offices of elected officials can be mere feet away from various stalls and shops whose patrons could only be the most impoverished members of society. The thing that I’ve heard said so often that keeps coming back to me is that India is a multifaceted place, and I’ve only seen one city. And to say that I’ve “seen” New Delhi would be a gross distortion. What I’ve seen are several blocks of New Delhi, each one full of scenes so remarkably packed full of little complexities that I have trouble digesting even those. But there are things that will stay with me, even in the first twelve hours of our journey. I don’t think I’ll ever forget the wisdom shared by Nirmala Desphande during our interview today, or the thrilling vikram taxi ride through the city taking us to dinner which may only have felt immensely dangerous. Looking back on it, I’m sure that the danger was, indeed, only in my mind, because I haven’t seen a single accident and the city continues to function despite what I might perceive as dangerous driving. With this said, I can only hope that each coming day is as full of surprise and delight as this past one has been.