President Abdul Kalam entered the room and everything went silent. Although certainly not a big man, his presence commanded attention. I had researched him and I knew that he was an engineer turned president. In India, the president is less like a politician and more like a national icon. The thing that I didn’t know and would soon find out was that in addition to being an engineer, mathematician, and national figurehead, the president is also an amazing teacher. The bits of wisdom and various anecdotes he shared were all captivating and packed with meaning. Like any good teacher, at the end of each lesson he shared, he looked around the room to make sure his lesson was learned. He would say “Understand? Understand?”

Generally, his lessons weren’t difficult. He spoke simply and always to the point. One lesson in particular stood out to me. It was a simple equation from a poem he had written. Righteousness of the heart leads to peace in the home, which in turn leads to order in the nation, which ultimately leads to peace in the world. He skillfully built from the individual level to the global level. In his understated eloquence, he answered the very complex question: What are the guidelines we can live by that will bring about positive change? 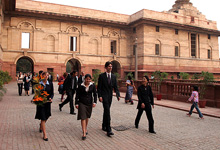 Before the interview, I spent some time looking through the President’s autobiography, Wings of Fire. In the very beginning, he talked about the importance of prayer. Prayer is something that I’ve always been curious about, never finding it a key part of my own spiritual practice. I was curious to know about how prayer had served him in his life. After a couple of opening questions, I asked mine. The answer he gave was truly beautiful. He spoke about how the most meaningful prayer is one made for other people. Upon reflection, I find that this rings true for me as well. I don’t feel the need to pray for myself, but I can still give forth gratitude for what I have by praying for others. 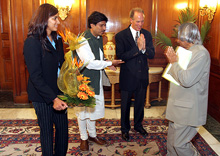 He was not one to talk for the sake of talking and he loved to keep his students (who were us on the auspicious day) on their feet. Sometimes this was an endearing quality and on occasions it was truly terrifying. He was prone to turn a question back on the inquisitor and at points during the interview I was forced to ask myself who was truly being interviewed. Perhaps due to jet lag, the president’s quick wit occasionally caught us off guard, but overall the interview was a positive experience that I won’t quickly forget.

It is about 12:00 am, and I am sitting on the train to Haridwar. Seated across from me is an Indian man, probably in his 70’s. He looks at me. Without a smile or a frown, but rather a look that showcases the fact that he knows me all too well. India had, after all, once been new to him, and he now appears to be comparatively analyzing the way in which I react to my surroundings.

Observing this man, I can’t help but notice the resemblance of his manner to that of President Abdul Kalam. During our interview, those same curious and knowledgeable eyes that now peer at me through curtains surveyed our class. These two men, venerable as India itself both know what I am experiencing better than I do.

This wisdom is some of what I’d like to take home with me from this trip. I believe that if I can harness even a fraction of India’s knowledge, I will be more acquainted and comfortable with myself.

Now the man on the train has noticed the inquisitive reply of yes, and at last breaks into a smile. I smile with him, and for a moment we are connected in delight. But my eyes are still naive and shallow, whereas the eyes of the man, resting placidly above his dancing smile, remain the omnipotent eyes of India.

I keep yawning but I feel wide awake. We’re finally at the Sri Ram Ashram, a place that I have been dreaming about coming to for ten years. We stepped on the sleeper train out of the light rain at 11:30 last night, and I slept despite the lack of room and privacy. At 3:45 am the conductor came by saying Haridwar, Haridwar. I stuck my head over my bunk to see if Prabha was jumping off the walls yet, but that didn’t happen until we got off the train. I can’t imagine the excitement of returning home after being away for three years, especially with the anticipation of seeing so many brothers and sisters.

They surprised us with leis of marigolds at the train station, and our short trip to the Ashram was filled with Prabha’s excited voice finally talking in Hindi with her few brothers and sister that had come to meet us.

I was helped up the stairs this morning by an adorable four year-old. She led me to a room full of dancing girls. Prabha was in the middle swinging the small kids around. I am going to savor these three days, I can tell. I mean how often do you get as many hugs from children as you want?

Arriving at the Ashram

We arrived at the train station after a wonderful meal at a Japanese/Chinese restaurant called Aka Saka. The train station was not too overwhelming, even though the train arrived late. Our travel agent Karan helped us to navigate our way through the station to A2, the “executive class sleeper car”. Much to our surprise, the executive class was not as posh as we had imagined it to be. We crammed into the very crowded compartments, some of us getting yelled at for sitting in other people’s seats. When we finally figured out all of our seating arrangements, the four hour ride went relatively fast.

“I didn’t find it to be as shocking or scary as the other students, as I had traveled the train to the orphanage before.” (Maddy). “It was definitely a surprise to me to be in a train cabin with people that I didn’t know and whom I couldn’t understand a single word from.” (Nina)

We arrived in Haridwar, the nearest large town to the city, with a wonderful greeting from some of the kids at the Ashram, and Dayanand, our World Religions teacher. They had flower malas for us, which are like leis made of marigolds and carnations. We all packed on the school bus that they had brought for us from the Ashram. We arrived at the Ashram at 5 am, and all found our rooms, which had welcome signs on them with our names that the kids at the Ashram had made.

We rested for a couple of hours until we were awakened by the children singing and the sun coming up. We took a quick bucket shower and went out to see all of the different kids singing and dancing and some practicing volleyball for our upcoming match.

“The hospitality and welcome that I felt was unlike anything that I have ever encountered before. Within about an hour I had at least three children following me around hugging me and calling, Ninadidi, (didi meaning older sister and offers a level of affection and respect) when they thought that I was leaving” (Nina). “When Prabha had one of the students come and get Emily and I and bring us over to the girl’s dorm to watch them practice, they stopped and performed a dance from the Bollywood movie for us. It was really wonderful to experience their enthusiasm and willingness to honor us as visitors. We just don’t get that kind of treatment everyday” (Maddy).

At ten we sat down for breakfast and had a scrumptious meal that was very filling since we hadn’t eaten for several hours. After that we passed the time sipping tea and getting ready for a volleyball game against worthy adversaries at one. All in all the Ashram has a great feel about it and we can’t wait to spend a few more very promising days here.