We were destroyed. I usually don’t play ultimate Frisbee, but I never considered that I was particularly bad at it. I was wrong. It was a six-on-six match that pitted Americans against Indians. It ended with a staggering loss for us. The final score: 12 to nothing. We never even got close to scoring. Although it was a friendly game, I can’t help but think that they really enjoyed destroying us. Yesterday we did the same thing to them in volleyball, so now the competition is tied one to one. Tomorrow, the sport is basketball and a winner will be decided, but I don’t really care who the winner is. I am simply glad that we get to compete with friends. 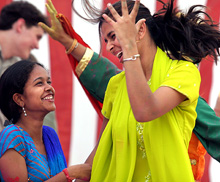 Laughter. That word was so strange to me two years ago. I hated that laughter even existed. Laughter was miles away from me and the fact that people loved to laugh made me angry. I stopped hanging around people just because they had laughed around me. But last year those dark days started to fade away. Laughter was slowly creeping into me. Now it seems that all I want to do is laugh. I’m glad I was open to it, because now that I’ve returned to the Ashram, I can see how loving and funny my home is. Since I have been here,

all I have done is laughed with my brothers and sisters. No matter where I sit, I am surrounded by kids. Again and again I make fun of them and we laugh together. My sisters and I call each other VIPs because everybody makes room for us, and if we ask for something, the other kids run off to get it. I have cherished every single moment of my stay with the kids and every moment that we have shared laughing. 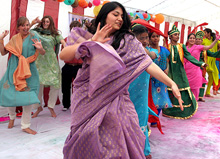 Today, our second day at the Sri Ram Ashram happened to be Babaji’s birthday. The day started out normally but after breakfast everyone broke into a birthday frenzy getting ready for their performances. We Mount Madonna students practiced “Jai Jai Ma” and “Seasons of Love” and were all very nervous about performing in front of a large crowd of Babaji’s friends. Especially since were already in awe of the talent of the students from the Ashram who would also be performing. I went from room to room finding people, scurrying around to get their costumes just right, or trying to put on that last bit of lipstick before running out the door. I was busy trying to find someone to tie my sari for me which I had bought a

couple days earlier in New Delhi and was dying to wear. A kind woman who was very skilled at tying saris helped me out and her tie made it past Babaji’s very experienced eye. We performed our songs and quickly took our seats to watch the rest of the performance. Just when we thought that our time on the stage was over, Ranu, a college student at the orphanage, invited us up on stage to dance with the Indian students. A brave few ran up quickly and within a matter of seconds the two schools were performing together in what I think was a better dance then we could have ever hoped to choreograph. I myself was cutting a rug and had a great time. Hopefully that won’t be the last time that we dance together.