We walked through the halls of the World Bank, not knowing what to expect. We entered a room that resembled many of the other rooms we have occupied for interviews over the last few days. When Leonard McCarthy, the Vice President for Institutional Integrity at the World Bank, entered the room and sat down, I began to introduce the group to him. I finished my introduction with, “If you have any opening remarks we would love to hear them.” It was then that the interview became both demanding and truly rewarding.
Leonard McCarthy took the opportunity I had given him, and handed it right back to us. “What is your impression of the World Bank?” he asked. With that question, what we had anticipated was going to be an interview became a conversation. He asked us questions about corruption in government. He asked us whether corruption should be allowed even on a small scale. This discussion led us to the question, “What is integrity?” We began to discuss this issue and other economic issues with him. I was grateful for our time with Leonard McCarthy because I felt that he sincerely appreciated our responses and our input. He wrote down what we had to say. We were not treated as students, but as people whose involvement was significant. There is nothing more gratifying than having someone so intelligent and so important genuinely value your contribution.
Our exchange with Leonard McCarthy is ultimately what our Values class was meant to prepare us for: to be able to discuss openly the issues and values of the world with figures that have significant influence. Sharing our opinions and perceptions of the world with Leonard McCarthy was a worthwhile and fulfilling experience.
-Emma Fladeboe
Our interview with Leonard McCarthy was the interview I had been anticipating the most. He had been on my radar for weeks and I was ready to speak to him, especially at the World Bank.

From the moment Leonard McCarthy walked into the room we could tell it wasn’t going to be an average interview. He came in and insisted that we eat treats and get something to drink. When we sat down at the table, he asked us to go around and say our names. The usual formality that is present at the beginning of most interviews disappeared and Mr. McCarthy acknowledged each of us and made us feel welcome. In my experience, this seems to be a common South African trait. 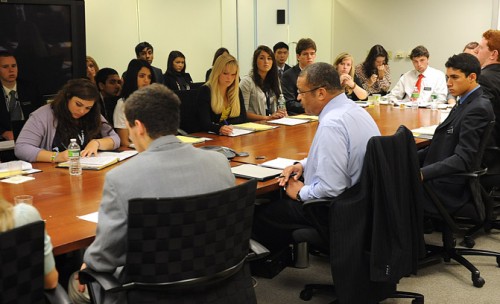 Instead of us asking Leonard McCarthy questions, he asked us questions about whether we thought any percentage of corruption was OK and what we thought integrity meant. He listened to us, intently soaking up everything we said and writing down what he thought was important. He made us feel like our ideas mattered. He turned the tables on us and we were ready for it. This experience was everything that the Values in World Thought class prepares us for. We worked hard and it paid off.

Mr. McCarthy said that he wanted to take 5 ideas from us and communicate them with his staff. We all had something to contribute to the conversation. It was fulfilling to feel like we had ideas to share with him. After our interview, Mr. McCarthy paraded us through his office and introduced us to some of the “corruption fighters”, as he called them. This interview was everything I had hoped for. I couldn’t have asked for more.
-Mari Fox


Congresswoman Jackie Speier rushed in, a whirlwind of papers in hand, lipstick and high heels. She immediately took her seat at the front of the room. “We’re really rushed for time,” her assistant apologetically explained. We turned our attention to the powerful force that is Congresswoman Jackie Speier and listened intently for 20 minutes to her story of tragedy and inspiration. It was clear that she had told the of being shot in Guyana many times before but that didn’t take away from the intensity of her story. Her ability to bounce back from many devastating experiences was, to say the very least, motivating. Nothing I have been through can compare to losing a husband, having multiple miscarriages or being shot five times and watching friends die around me.

After working so hard researching Congresswoman Speier and writing questions, I had an expectation of who she would be. It turns out that she did not fill my expectations; she surpassed them. Although the interview was limited, and we weren’t able to ask many of the questions we had been preparing, those few short minutes left us captivated.
-Erin Mitchell


As we crammed into the relatively small room, Congresswoman Jackie Speier came rushing in. She told us a heart-wrenching tale that included getting shot, her husband’s death and losing three different elections. And how she picked herself up after.
One of the first pieces of advice she gave us was, “Do what’s right, not what’s expedient.” I have many times wanted to take the easy way out and I have at times, actually taken the easier way out, but most of the time I strive to do what’s right for me, what’s right by my family, and what’s right by my community. To have those efforts reinforced, and almost commended, by someone of such high standing and influence, was a very positive, and extremely inspirational experience.

After all of her bad luck, after all of the pain she had been through, she had such an air of hope, understanding, and acceptance. It was truly inspiring. She made it through the difficult experiences in her life and ended up winning congressional office and re-marrying. Congresswoman Speier’s parting advice to us was, “Success is never final, failure is never fatal. Don’t be afraid to try something, don’t settle, and don’t sell yourself short.” I am not one to easily take risks and I like to be comfortable. I am outgoing and loud but that’s my comfort zone. I am terrified of failure. I like to be right and when I’m wrong, I end up defensive and closed off. I work hard to not be that way but it’s a challenge every day. It was reassuring to hear that a single failure won’t be the end and that most success is in not giving up. I loved hearing this from Congresswoman Speier who’s been through so much and succeeded when all the odds were against her. For these two pieces of incredibly valuable advice, I will always be grateful.
-Mara Getz


The assistant announced Senator Bernie Sanders’ arrival. The senator with smoky wisps of white hair drifted into the vast wood paneled hearing room. His hair hung above a broad set of shoulders and he moved with a stride born of urgency and purpose.
He sat for a moment, as Emma Fladeboe introduced the group. He immediately stood and interrupted her to ask us about our “unusual” school. As he talked of his impending debate on finance reform on the senate floor, he reminded me of a soldier, or of a general speaking of a coming battle.
I liked what he said about identifying problems and then doing what you can to solve them. It seemed incredibly simple and yet incredibly powerful, coming from the man of such intellect and position.
-BY Swamy
Today was a day dominated by interviews with elected officials. The last few days we have interviewed individuals working at non-government organizations and non-elected government officials. Today’s interviews were different from the previous days interviews. The main difference was that today we got a more specific description of the process of governance, while yesterday we spent more time on mission and vision with the people we interviewed.
One of the best examples of this was the interview with Senator Bernie Sanders. Senator Sanders was not only a Senator but also a great teacher. One of the first things that Senator Sanders said when he walked in the room was, “I see my role here as someone who fights for people who don’t have a lot.” He then explained how he chooses to represent his constituents. I was pleasantly surprised to find he was more motivated to help the country rather than get re-elected. 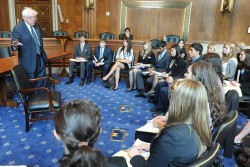 Another great moment in the interview was when we asked him about his view on the partisan nature of the current discourse. In response he asked us to think of an issue facing the country. After we listed a few issues he declared, “The main question facing politicians is what should we do?” He said that the media plays up the partisan divide. If the media understood that the main goal and process of politics was to figure out how to solve issues through debate, they might not take such a negative approach. Often times the media amplifies the difference in politics to create a better story. Senator Sanders also admitted that the Senate does have its share of partisan politics. Maybe if we, as citizens, didn’t put so much pressure on the parties to stick to their lines we could minimize this partisan divide.
Overall, I was impressed with his ability to answer our questions with questions of his own, and I was disappointed when he had to leave because he was called to the floor of the Senate. I felt that we were just getting to the real issues.
-Jack Massion


Today we interviewed Congressman Jeff Flake for the first time. I had been looking forward to this interview all day, in part because it was going to be our first interview with a Republican congressperson. I was excited to hear a different perspective.
Toward the beginning of the interview Anneka asked, “We are having a hard time placing you in the political spectrum because on the one hand we read that you are a conservative’s conservative and then we see that you are personally committed to people who are living on the margins. How do we reconcile these apparent polarities?” His short answer was, “I don’t know.” I liked this answer because I often feel the same way about politics. I agree with a few conservative policies and I agree with some liberal policies. His answer reassured me that this is all right. I don’t have to pick one side or the other. The only thing that really matters is that I stick to my morals and beliefs and don’t let my politics be dictated by labels.


Our last interview of the day was with Arizona Congressman Jeff Flake. Congressman Flake lived up to the claim made by The Hill, that he rivals Representative Aaron Shock (Il) as the “biggest hunk” in Congress. More importantly, he was friendly, knowledgeable and seemed surprisingly enthusiastic to engage with us. 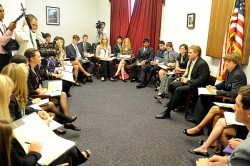 During the interview with Congressman Flake, Noah asked, “What are your feelings on the partisan nature of the political discourse in the Congress?” The Congressman said that he felt Congress needed more partisanship around certain issues, but that they needed less of what he called “petty partisanship”. For Example, Congressman Flake told us how President Obama recently invited him to play basketball. He said that some of his constituents contacted him before the basketball game and told him that he shouldn’t engage with the President because of his political affiliation. Flake said that this was taking partisanship too far. He said that he believes that partisanship is essential to politics and government, however petty partisanship serves no purpose and makes no advances. I found it refreshing and valuable to learn from and connect with a Congressperson from such a seemingly different place on the political spectrum.