Congresswoman Loretta Sanchez has a fiery passion for what she thinks is right. One issue she supports is the right of women to be in combat. She explained to us that legally women aren’t allowed to fight on the frontline but in reality they are already there fighting. Since women’s accomplishments in combat can’t be formally recognized or honored they never go on their records. This means that they cannot move as far up the military ranks as men who have served in combat. Recently, Loretta Sanchez introduced a bill that would formally allow women to be in combat. She was very disappointed when this law did not pass. Congresswoman Sanchez made such a strong argument for the bill that I did not understand why people would not support it.

Congresswoman Loretta Sanchez had positive things to say about the leadership role that the United States plays in the world arena. We asked her about the perception that the United States is on the decline. She said that yes there are problems, but that we are still the world leader. “This is our century,” she said. This gave me a lot of hope for the U.S. and our role in the world.

Congresswoman Loretta Sanchez was a very enthusiastic woman. Her advice to us was to find what we are passionate about. She has definitely achieved this for herself. I have no doubt that she is making a difference by pursuing what she is passionate about. This gives me hope for our country. I know that we have men and women, as passionate and as driven as Congresswoman Loretta Sanchez, who on a daily basis are fighting for what they think is right.
-Brittany Lovato 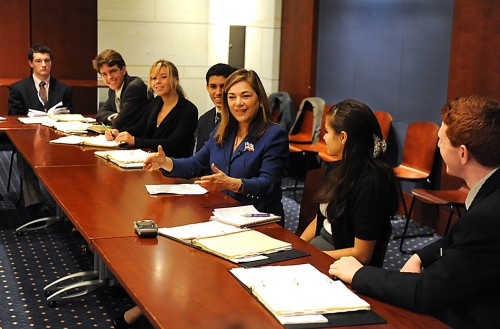 We heard that Nancy Pelosi said, “When Loretta Sanchez came into the House, she changed the way people interact.” When Congresswoman Sanchez walked into the room I understood why Speaker Pelosi said this. She was full of energy and she interacted with us as adults not as children. She listened to our questions intently and she answered them directly. When at the end of the interview we asked her for advice, she responded by telling us her “Five P’s” for success: plan, partner, perspiration, passion, and last but not least, perseverance. She told us to plan for the future and have someone, or multiple people, to share our lives and our successes/failures with. She said we should work hard for what we want and be passionate about what we do. Lastly, she said we should persevere. She illustrated the last P by telling us a story about a congressman that ran FIVE times for Congress before he won his seat. It was Congressman Collin Peterson of Minnesota and he is now the Chairman of the powerful Agricultural Committee.

I found Congresswoman Loretta Sanchez to be an inspiration. She showed enthusiasm in all aspects of our interview. She emphasized how creativity and innovation are what make this nation strong. Hearing her advice made me feel confident in what I want to accomplish and reassured me that I can make my own path. She reminded me that if I want it enough, I WILL find a way to do it.
-Mara Getz

Discipline. Nothing in life is simpler and yet nothing in life is more difficult. There are few people in this world that are able to find something that they are committed to and discipline themselves so that they never lose sight of their goal. Life has many distractions and complications and if we indulge them for a mere second, our discipline vanishes. Congressman John Lewis is among these select few that can actually find something that is significant in their life and discipline themselves to hold fast to it. For Congressman Lewis, that commitment is a devotion to nonviolence that began back in the early 60’s when he marched with the great Martin Luther King Jr.

To be honest, I went into our interview with Congressman Lewis with very high expectations. Each class that had interviewed him in prior years raved about how fantastic and inspiring their interview with him was. Expectations aren’t often met but in this case, I am happy to say, there was nothing more I could have hoped for. Congressman Lewis had a quiet, reserved and yet very bold presence. He is one of those people you meet in life that when they enter a room, you know they are there. It didn’t take long for our class to become involved in a very deep conversation about his past involvement in the civil rights movement. Hearing Congressman Lewis’ stories about being beaten and verbally abused, I was astonished to think that not only was he able to forgive the people who caused him harm, he was also able to keep from retaliating against them. Any person who didn’t have a steady grip on their values would have succumbed to the natural instinct to fight back and protect himself. Congressman Lewis taught me that having discipline allows you to stay true to your values and true to yourself. Anyone can claim to have a certain set of values but these values are very difficult to adhere to if discipline is lacking. Having faith in your values is what sustains you in situations when you need them most. Congressman Lewis recognized this fact at a very young age and as a result he has lived a life of success and perseverance. Most importantly, he has had a life of personal fulfillment and satisfaction, knowing that he has a strong set of values that he can hold on to in extreme circumstance. Congressman John Lewis taught me about the importance of establishing life values and sticking to them no matter what. I will never forget this.
-PK Hattis 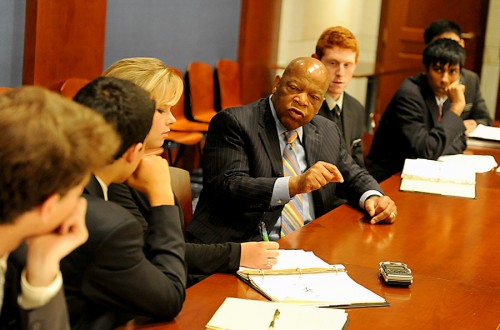 Motivational, inspirational, and humbling are only three of the words that come to mind when I think about Congressman John Lewis. He was poised and modest in his answers and his thoughts. Most importantly, he had the strength to forgive people who had caused him unimaginable harm. I don’t know if I could ever be as forgiving or as strong as he is.

Congressman Lewis entered the room and sat down so we could begin. He opened up the conversation by talking to us about the Civil Rights Movement and the part he played in it. He also talked about the changes he has seen in this country. He said that we should come walk a mile in his shoes, and we would see how our country has changed during his lifetime. Our country, in fifty years, has gone from a place where African Americans were beaten and had tear gas released on them for protesting unjust practices, to a country led by an African American President; the change and growth has been exceptional. Congressman John Lewis said that he cried when President Obama won the election and that he cried again on January 20th, 2010, the day of the Inauguration.

Emma Petersen asked Congressman Lewis if he believed we, as a country, were doing a good job standing for what is “right”. He said, “I am shamed and disgraced we’re not doing more. Our government needs to do more to say no to violence and no to genocide. We should do much more.” I felt like this was a realistic response.

Another response that struck me was his answer to Mara’s question, “How do you forgive the people that have inflicted so much pain in your life?” Congressman Lewis explained, “Forgiveness is powerful, it is redemptive.” He also said, “Love is more powerful than hate, and non-violence is more powerful than violence. It is a principle you do not give up on.”

His parting advice to us was, “If you see something that is not right, is wrong, or is unjust, do something about it. Don’t be quiet. Cause trouble, the necessary type of trouble.”
-Dani Quinn

Without Congressman Sam Farr and Tom Tucker we would not have had many of the opportunities we had during this trip. They both worked hard to help us with many of the congressional interviews that we had. By the time we sat down for our actual interview with Congressman Farr, we had already seen him on the Capitol steps and spent time with him in the House Gallery.

Congressman Sam Farr is the kind of guy that people love to be around. The way he treats everyone, from his staff to his co-workers, showed us what a genuine person he is. It is no wonder that so many of his fellow representatives agreed to meet with us when he asked them to.

When it came time to interview him, I was very tired. It had been a long day. However, as soon as he walked through the door, I felt the same sense of excitement and intrigue I had felt when we walked with him around our nation’s capitol. He sat down and before we began the interview he asked us all how we were. He specifically asked for Lindsey because a mutual friend had told him to say “hello” to her. This demonstrated to me how much he values relationships.

Overall, I think that Congressman Farr is a great person and an asset to our D.C. trip. Our time with him exceeded my expectations. I already knew he was an amazing man, our interview with him only strengthened this belief.
-Amar Nijor 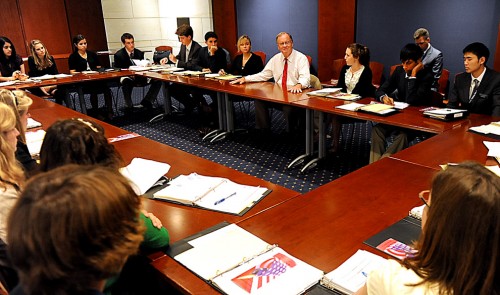 Congressman Sam Farr said two things that I found to be particularly interesting. The first was the idea that it is important to go out and explore the world. Congressman Farr said, “Where you live is not the real world.” To me this means that to be a well-rounded person you need to break away from your comfort zone. Every time I travel I learn new things about that place and the people there. For example, we learned about the value of community in South Africa. Congressman Farr definitely understood this. He said, “I never wanted to stop being a wanderer and exploring the world”. To me this means he has a continual thirst for knowledge.

The second thing that I found to be particularly interesting was when Congressman Farr said, “Poverty breeds no hope.” I agree with this statement. I saw evidence of this in my travels to South Africa and Mexico. I saw the way in which poverty decreases hope. Lessons like these are why traveling should be an integral part of higher education.
-Jack Massion 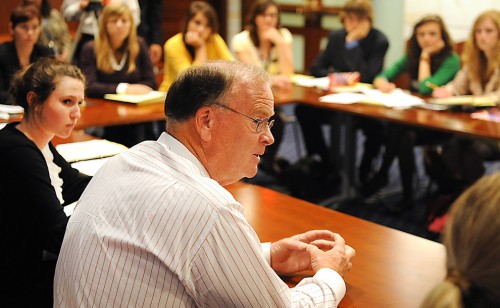 Our goal in coming to Washington DC was to interview people who embody the values we’re studying in the Values in World Thought Program and that we think are important in our lives. One of the values Mount Madonna School has really emphasized is to give back to the community. During our interview with Congressman Sam Farr he supported this value by saying that we have a responsibility to give back. It’s nice to know that someone like Congressman Sam Farr represents the district most of us live in and that he embodies the same values our school is teaching us to embody.

Throughout this trip we have realized the extraordinary opportunities that we are exposed to and the inherent privileges we are given. We have also realized that by being given these gifts we have the obligation and responsibility to give back to the world.
-Lily Connor and Emma Peterson