The word that comes to mind when I think of our interaction with the 12th graders today at the Sri Ram Vidya Mandir School is hospitality. I find it overwhelming that kids that make up a school, an education system, a culture so very different from our own, can show such hospitable welcome.

We separated into small groups, consisting of two Mount Madonna students and four Vidya Mandir students, in order to talk about our lives and our intentions for the future. Although most of the kids did not have a strong command of the English language, we had someone in each group from the Ashram to translate. It became a very rewarding conversation as we sat together and later walked around the school. As we toured, the students in each class we visited would greet us with eager waves and grins, especially the younger children.

I was particularly struck by one 12th grade girl I met, Khiran. You could tell she had so much she wanted to say but was nervous. Every time she decided to contribute she would put forth such an effort to say it in English before resorting to Hindi translation. I felt very respected and also wished that I had even the slightest knowledge of the Hindi language in order to facilitate our communication. She even volunteered to share what she heard from me when we spoke as an entire group. 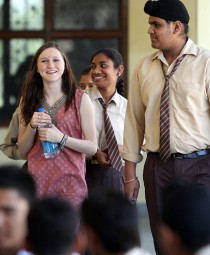 I commend her for this seemingly small act of courage, as I would probably not have done the same if in her position.

As I meet these children I wish there was something more I can share with them. Not to impose on them our Western ways, or give them a glimpse of a society they do not live in, but something that will make them honor and remember the experiences they had with us, as I will the one with Khiran.

Can we only find these kinds of small moments of wonder by traveling half way across the world? Or do we simply overlook the potentials for them in everyday life?