This short trip to India has shown me more about myself and the world than I’ve learned in the rest of my entire senior year of high school. For the most part, I was able to set aside my personal mental, physical and emotional discomforts and problems in order to focus on soaking in the contents of the interviews, the cultural differences, and my own gradual transformation. The interviews taught me about acting ethically, nonviolence, and truth; the experiences showed me the application of those things, and the reflection I did in my journal and on my own allowed me to track my journey. When, as a class, we talk about the learning journey, I can now affirm that the Return is the most important part; in the past few days of being back in the United States, I’ve really realized what I got out of the trip and how I’ve changed because of it.

The interviews, first off, gave me the ideas I need to begin incorporating into my life. Mani Shankar Aiyar’s points about power, and what kind of role it should play in society, first began this process. He talked about why he had gone into politics and said that his original intention was to get on top and have some kind of power. He pointed out that though his intentions hadn’t been pure, the result of his actions was actually not unethical or wrong, because he had come to the realization that in order to do his job and attain that power, he needed to help others and look out for the wellbeing of the people under him. This was a direct application of the Dalai Lama’s Ethics for the New Millennium point that it’s in our self-interest to act ethically and out of concern for others because of the interdependent nature of the world we live in. The interview with the Dalai Lama himself also revealed key concepts that needed to be applied, like his comment that the purpose of education is to reduce the gap between appearance (perception) and reality – in other words, to move towards the truth.

This idea of truth came up later at the Tibetan Children’s Village when we got into small groups and the kids there talked about the awareness and perspective needed in order to take oneself out of the equation, which leads to seeing the truth, which makes violence unnecessary. In essence, they were saying what His Holiness had said, but had a deep understanding of it within their own lives and were also able to apply it to specific situations.

Samdhong Rinpoche was another figure whose interview I got a lot out of; he said that if you discover yourself, you become a virtuous person and that everyone has their own truth. That made sense. These simple ideas made the application of ethics in my own life more possible, because umbrella terms like truth and virtue were suddenly being individualized in such a way that they became attainable.

Rinchen Kandho’s interview was equally rewarding. When she talked about gender inequality being a dumb problem to focus on because the real issue was a lack of general respect and acceptance, rather than a specific case of it, I understood the larger point being made. And although each of these individual interviews and experiences had a slightly different emphasis (Hari ki Pari stressed the oneness of belief and love, while the Gujar Village experience drew attention to an individual’s greed and how unnecessary it is), they were all saying the same thing: the inherent interdependence of the people in this world makes it pointless and counterproductive to do the things that single us out. This tied into every experience and interview we had. By the end of the trip it not only made sense, but seemed applicable as well. 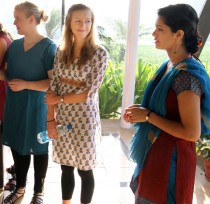 Coming back to the U.S. and trying to apply all of these ideas in my life back home has been a test of my core values. There have been two sides to “The Return” so far that have challenged me: observing and noticing the differences in cultural attitudes between India and the United States, and trying to apply what I discovered on the trip and now believe to be right. So far, I’ve noticed a general sense of excess and ungratefulness in the society I live in, both in terms of material goods and opportunities. Whereas before the trip I would have thought nothing of a shopping trip or a homework assignment, I now put a lot of thought into those simple actions, asking myself: “Why am I doing this? Do I want to do this? Do I need to do this? Who is depending on me? Who can I help? How important is this?” etc. I find myself unconsciously picking up trash around campus, or apologizing for my attitude earlier in the day, or noticing and appreciating a friends’ silence in a different way.

Though I’ve been very good at observing these differences, I haven’t been the best at applying what I thought I had learned on the trip. In my notebook during the interview with Rinchen, when I was exhausted, nauseous, and upset with my class, I wrote down, “Note to self: remember how kind people on this trip were to me and spread that around”. So far, I haven’t been able to do this effectively. It’s been too easy to fall back into my old patterns of behavior and forget that the people around me are a blessing. So the compassion I swore I would have is lacking simply out of habit. I wish I could have bottled up some of the feelings I had while I was there, like when we were at the Tibetan Children’s Village, or after the interview with the Dalai Lama, when it seemed that the whole world made sense in the simplest of ways. And I knew (if even for just a split second) that I could be the good, kind, compassionate, honest, driven person I wanted to be. I don’t know how to explain that feeling to anyone else and I certainly don’t know how to recreate it here for myself; if I did know, I’d do it every day.