When our Values In World Thought class began preparing in February for our spring journey to Washington DC, I learned that we would interview leaders such as Congressman Dennis Kucinich and Congressman John Lewis. I was, and still am, excited to speak to a former presidential candidate and a famous civil rights leader. I admire both men.

When I reflected on this I noticed that all the people I look forward to meeting in D.C. so far are men. I thought about all the people in my life that I consider heroes and they are overwhelmingly men. Women make up about half of the world’s population, yet I could only think of a few that I consider my heroes. I have never really thought about sexism yet I realize I know very little about our female leaders. On our DC trip we will speak to many different female leaders, ranging from human rights activists to political organizers, to leading diplomats. I hope that when I speak to these different women and hear their perspectives I will be able to expand my worldview.

Preparing for the “Government In Action” trip to Washington, D.C. I am beginning to feel the strain of the required discipline, compounded by the reality that my final exams and SATs fall within the same time period. Ward expressed my feelings this morning when he said, “Creativity is not always convenient.” This sentiment rings very true for me, as I try to produce quality work while also juggling academic challenges. This trip is forcing me to learn a different sort of work ethic that I know will serve me well later in life. I know that when we are in the thick of the trip and working nonstop in preparation for our next interview, I will be in my element. Our collective purpose will rid me of my remaining apathy. I am apprehensive that I will not be able to work up to the standards that are expected of me, but I suspect that once we are in the thick of the trip, I will be able to achieve a quality of work that is not possible for me under normal circumstances. I seem to only be able to accomplish this level of clarity and industriousness under extreme pressure. I am curious to see how our collective energy as a group bears up under such conditions. I have faith that we can work well together, even in extenuating environments, and that we can realize this trip to it’s full potential.

Today, the months of excitement (and hesitation) finally reached their end. At last we boarded the Boeing 757 and jetted off toward the nation’s capital. The red-eye flight lived up to its name and by the time we reached our destination at 6:43 AM, our eyes were as red and blurry as the clouds just starting to be illuminated by the slowly rising sun. We soon reached our hostel, but fate had decreed that the red-eye would continue since our gracious hosts had not yet readied our rooms. With much needed sleep now out of the equation, we decided to wait out the time by exploring our nation’s capital. 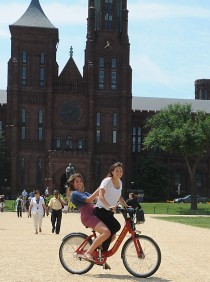 Many wise students desired to take full advantage of our time by shopping at Forever 21 and lusting after hot Cheetos. This great idea was fortunately dismissed and instead we moved on to more erudite institutions such as the Smithsonian’s Air and Space and Holocaust museums. After our tourist activities concluded, we headed to a nearby food court and the pining for hot Cheetos began anew.

With everybody soon fed and happy, we returned to the hostel where our rooms were now ready for our occupancy. With the bags distributed to the various rooms, it was now time to renew our preparation for the coming interviews. The aftermath of the red-eye and the setting in of jetlag combined to create a limbo state in which an astounding amount of work was accomplished. As dinner came and went and the contributors starting dropping like flies, the limbo workers continued their crusade to prepare the group for the long journey ahead. I imagine the limbo effect will soon wear off with a good night’s sleep, but soon we may move into an even stranger situation as we explore the great unknown of our great nation’s capital.