I worried when reading about past years’ trips and interviews, and now when writing in this blog, about the difference between serious writing about a thing someone found to be truly important and the imitation of the same. After our interview with Layli Miller-Muro, I can much more easily accept what I have heard before as sincere. I have heard often before that in an interview the “energy of the room” changed. There is a different “energy” in the experiencing of watching and listening, a certain way things are allowed to matter, by the immediacy and thoughtfulness of someone like Layli Miller-Muro and maybe even in part by the foreignness of the 10th floor law office we were in.

Layli Miller-Muro works as a lawyer, somehow simultaneously for a large firm and the Tahirih Justice Center. She founded Tahirih 16 years ago to provide legal support and advocacy for immigrant women and girls fleeing gender-based violence. She began her work in this area when as a law student she represented a 17 year-old named Fauziya. Fauziya was seeking asylum from a forced polygamous marriage to a much older man and from the practice of genital mutilation. This transformational case was in the court system for over two years and finally reached the Supreme Court in 1996. It established the precedent of asylum from gender-based persecution. She co-wrote a book with Fauziya about this case and used her portion of the proceeds to found the Tahirih Justice Center when she was only 23.

Throughout the interview, Layli Miller-Muro was able to balance talking about the purpose and emotion of her job with specifics and thoughts and reasoning. A lot of her ideas centered on the need for empathy, both in our laws and individually. Personally, she seemed to find a “higher calling” in her Baha’i faith, that conscious deliberation alone would have trouble providing. She viewed the politics of the women she supports as, even while often meeting with a lack of understanding and a general hostility towards immigration, an issue with a bipartisan appeal for its “unqualifiedly sympathetic” nature. The basics of what she said were generally what could be expected from someone of her position – supporting the right of women to make choices but encouraging them to not make stupid ones, providing statistics to argue that women provide a distinct value in leadership and to argue that excess immigration was not really a problem in America, but there was a lot more subtlety and articulacy in what she had to say than in these sorts of up or down, for or against categorizations. She is indeed a lawyer. I am a little worried that my standards will be thrown off by a first interview as engaging as this one. I really hope to have more serious and open discussion like this one. I want to hear more about what people who do and think a lot, do and think.

“There’s nothing that wakes me up faster in the morning than the thought that someone needs help.” Layli Miller-Muro is a woman who doesn’t simply speak about changing the world; she takes action every day. As part of my preparation for our Washington D.C. trip, I read Do They Hear You When You Cry, the book that Layli Miller-Muro co-wrote with former client Fauziya Kassindja. As a law student, she represented Kassindja, helping her achieve political asylum in the U.S. and escape female genital mutilation (FGM) in Togo.

During our time with Layli Miller-Muro, we discussed how we as individuals let sexism prosper and grow. Layli asked each of us to consider what our role is in furthering sexism. Everyone has their personal perspectives and I can spend countless hours trying to change them. However, if I really want to take the first step in furthering gender equality, I need to look at my own views and change the way I act. Although I have been raised to condemn sexism, it’s difficult to ignore the messages that the media and society send.

Layli Miller-Muro reminded me that we need to take a look at our own stereotypical views before we can make a change within our community. Cliché as it sounds, I left the interview feeling empowered and as if I could make a difference in the world like Layli…as long as I look inside before I try to change what’s around me. In Layli Miller-Muro’s words, “Define who you want to be as a woman and be it.”

“People aspire to be leaders, but they don’t always aspire to be good leaders.” Layli Miller Muro is the true embodiment of a good leader. Her energy is magnetic, her smile is authentic, and her enthusiasm is contagious. She described her experience as founder and executive director of the Tahirih Justice Center and shared with us the horrifying realities that her clients face. As she spoke, the fire in her eyes immediately drew me to the edge of my seat, and the vehemence in her words kept me there throughout the interview. The passion she has for her work was evident and that passion is what continues to drive her actions forward. 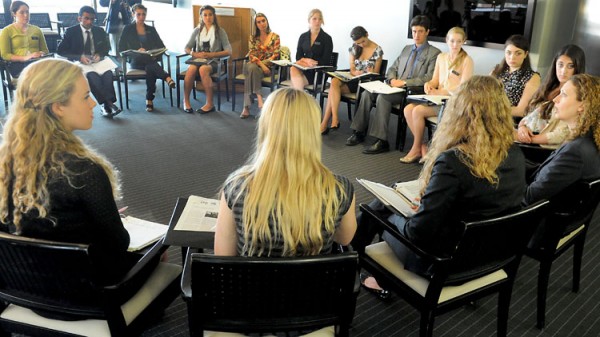 As I prepare to go off to college, the unknowns of my future are becoming increasingly daunting. What will I do with myself? How will I contribute? How can I make a difference? Layli’s words helped me realize that passion is the foundation, upon which all else will fall into place. She did not aspire to be a leader. She simply followed her passion, which eventually led her to a leadership position. This is what distinguishes a leader from a good leader, and this is what I hope to emulate as I enter a new stage of my life.

It’s one thing to read a summarized account of tragic events and quite another to hear it related to you in person. When Layli Miller-Muro introduced herself she began by describing some of her past cases. After her introduction, the feeling in the room dramatically changed. The high, nervous energy of 21 teenagers evaporated as we leaned forward in our seats to hear more. Layli was thoughtful and listened to our queries with intensity. When she answered them, she looked straight at the person asking the question, addressing them, feeding off their reactions, and conversing through simple eye contact and smiles. Slowly the formality of the interview format melted away and the exchanges between Layli and individual students stimulated the conversation further.

At the end of the interview, when my classmates and I took turns sharing with Layli what had struck us from the discussion, I noticed an overwhelming theme, one that rang true for my experience as well. Layli was able to captivate each student in the room by making her answers and explanations relatable.

Meeting Layli Miller-Muro was a privilege I shall be forever grateful for. Her words have caused me to re-examine my own life, motives and experiences, as well as look to my future with purpose and curiosity. Now as I approach college and embark on the rest of my life, I shall remember Layli’s passion and inspiring ability to connect with 21 nervous teenagers she had never met.