Earlier this year we were shown a documentary called Misrepresentation, which focuses on the impact media has on modern women. Since watching this film, the issue of women’s equality has been something that I am extremely interested and enthusiastic about. Therefore I am grateful that a theme of our trip so far has been the empowerment of women. Following our amazing interview with Layli Miller-Muro, we had the privilege of interviewing Susannah Shakow. Susannah founded a nonpartisan operation called the Women Under Forty Political Action Committee (WUFPAC) that encourages young women to run for political office and she currently runs an organization called Running Start. Running Start works to inspire young women to political leadership.

During the interview she spoke about one experience she had speaking with female high school students about political leadership. The students unanimously agreed that there should be more women in politics but only one girl was actually willing to run for office. She noted that many girls are not raised believing that they can have a successful political career. This reduces the number willing to try. Susannah is very clear that this needs to change. Having the opportunity to talk with an individual working to support women’s empowerment was an exhilarating experience. One of the things I most loved about Susannah was the absolute confidence that radiated from her. She never once apologized for her beliefs or wavered in her absolute confidence that women should have a bigger role in politics.

From our interviews with these women, I’ve begun to realize that the first step to getting more women involved in government is getting them to believe that they are capable of making a difference. As Susannah said, women should not have to conform to fit the standard that society has set for them, but instead be confident that they can be successful just as they are. Meeting these women has been a true inspiration for me and I will try to use their advice to be the change they are trying to inspire.

When we met Susannah Shakow in the lobby of her husband’s law firm, it was clear that this would be an engaging interview. She spoke with ease to a variety of students, while we set up the room. Her ability to connect with us was a theme that prevailed throughout the entire interview. What I loved about her was that I really felt she wanted to be understood and to understand a little bit about us; she wanted a conversation, not an interview and I was hoping for the same thing.

She began the conversation by saying that if there was one thing she would like us to take from the interview, it would be that every single person is capable of finding something that they are passionate about. It was clear that she had found her passion. However, what struck me went beyond her passion. Coupled with her love for her cause, she had a determination that could not be denied. She was a self-empowered woman who never let anyone discourage her from following the path that she felt was right. When we asked about where this strength came from, she mentioned that it was almost an expectation she had for herself. She had a responsibility to work for the change that she was passionate about. That combination of passion, drive, and adherence to what she believes is right is a rare and beautiful mix that I find absolutely inspiring.

I am excited about this trip because we have the opportunity to try to understand people who we never otherwise would have had the chance to meet. Not only do we get to sit down with these incredibly accomplished members of our society, we have the opportunity to truly understand the thoughts behind their actions. This is rare in any conversation. Our discussion showed me a snapshot of this woman’s remarkable life and in just one hour she was able to convey to us a little of who she is and what she stands for.

Susannah Shakow began her interview by informing us that the path she traveled to get to where she is has not been a straight one. This immediately caught my attention because I identified with it. I often hear people refer to their work as something they always knew they would end up doing or as something they were born to do. When someone feels they were destined to do something, I feel it is implied that they found something they enjoyed and that they were naturally good at. This being said, I found it refreshing to hear such a successful woman like Susannah say that her path to success wasn’t a sure thing.

Although I have yet to hit the peak of success, I feel that in comparison to where I thought I’d be today, I have been successful. Like Susannah Shakow, my path was not a straight one. I found this aspect of her life to be relatable and inspiring. Susannah also emphasized that you can do something you are passionate about. This taught me that I shouldn’t settle for something just because I am good at it if the passion isn’t there. I now feel confident that striving to do something I am passionate about is a better option than doing something just because I am good at it. 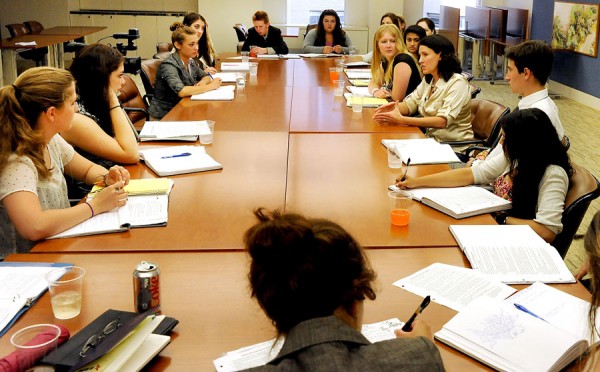