Alyse Nelson, the president and CEO of Vital Voices, is full of empathy and vitality. Her belief in empowering women as leaders is so genuine that I can’t help being inspired. Alyse told us, “Empathy is one of the most important leadership skills.” Too often we think of leaders as those who are high up in the ranks “above” the rest of the world. To be a true leader, one must understand and want to be with the people around them.

Alyse told us a story of a woman she met through Vital Voices who was in Parliament. She had been office for a long time and always won her elections by a large majority. Yet, she still went on the campaign trail and talked at length to the people of her district. Alyse asked her why she put herself through the exhaustion of campaigning when she knew she would win. The woman replied that she could not lead her people without knowing their struggle. She could not accurately represent them in government if she didn’t understand them on a human level. So she listened to every story, shook every hand. It wasn’t about winning. It was about knowing her people.

In my opinion, a leader is not someone who sits in an office on the top floor with the view, isolating themselves behind papers and importance. A leader is someone who makes an effort to understand those around them and helps to empower them. A leader is someone like Alyse Nelson who cares more about helping shape other leaders than any title or corner office. I hope someday to be the kind of leader that Alyse is; the kind of leader who inspires others to lead.

I entered the Vital Voices office and was greeted by four black and white portraits hanging from the wall. Each portrait had an image of a woman. Each woman’s image was unique. Different skin colors. Different cultures. Different clothing. Yet there was one commonality that united the four portraits; the captivating passion that radiated from each canvas. 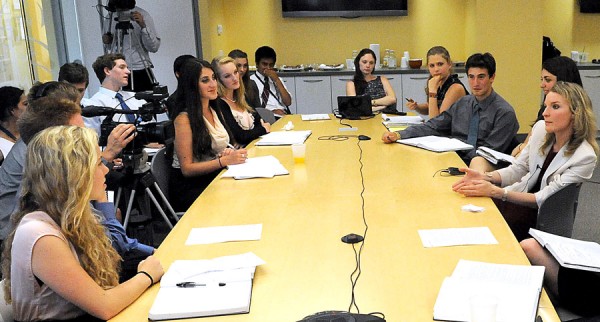 I looked up at these four women and couldn’t help but feel somewhat inadequate. I have been blessed with so many opportunities and so few struggles. How could I possibly offer the same amount of passion to the world as these radiant women who have endured and overcome so much?

When Alyse Nelson entered the room, she unknowingly confronted this insecurity of mine and replaced it with a sense of hope. When speaking about her experience at the age of 21 at the Fourth World Conference on Women in Beijing, she revealed that she too had felt inadequate. Surrounded by women with heartbreaking stories and profound discoveries, she began to wonder what she was doing there. She had not encountered what many of these women had experienced and therefore questioned the validity and impact of her presence. However, instead of allowing this uncertainty to paralyze her actions, she used it to fuel her curiosity. She opened her heart up to these women, hoping their new perspectives would lead to authentic understanding. This experience is ultimately what ignited Alyse’s passion to help and it has continued to fuel her actions for the past 15 years. 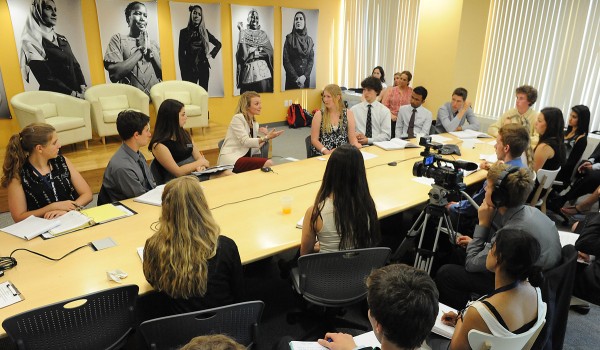 I listened intently as Alyse described this story and could not help but turn my eyes towards the portraits once again. This time, I no longer saw four courageous women, representing experiences that I will never understand and motivation that I will never posses. Instead I saw four courageous women, representing the endless amount of knowledge and passion that is still out there, waiting to be shared with the world.

My experience with Alyse Nelson brought me to the empowering realization that curiosity enables empathy. And empathy? Empathy is ultimately the force that enables passion.