On Friday, under a perfect blue sky we wait for the votes to be over. The members begin to come down the steps. I spot our own, Sam Farr and go to greet him. This is one of my favorite moments of the D.C. journey. This is when the students “work the steps.” It is really quite simple. When there are votes in the House of Representatives, we stand at the bottom of the Capitol building steps on the “House” side, and wait until the votes are over. Then the members walk right past us and return to their offices. The students with a bit of prompting can walk up to any of them and introduce themselves. Most members will usually take a few minutes to chat with us. They seem genuinely interested in young people and respond well to those who approach respectfully. 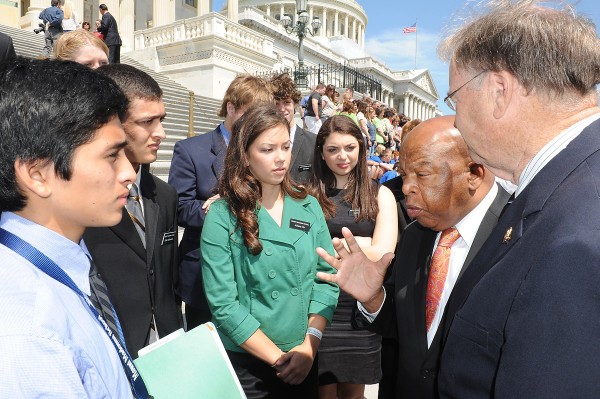 It is because of these congressional votes that our interview schedule has been disrupted, and yesterday we missed one of our favorite interviews with the iconic civil rights hero, Congressman John Lewis.

As I stand with Sam, I notice Congressman Lewis come down the steps. Our students surround him and Sam and I join in. Congressman Lewis with his soft Georgia accent, says, “I am so sorry I missed all of you this year.” Sam seizes the moment. Clearly he and John Lewis know and care for each other. Sam gently begins to incite a few stories from John.

We have no better friend in Washington D.C. than Sam Farr. We have interviewed him in every term since he was first elected. He has, on several occasions, approached other members of the House saying, “You must speak to this group of students.” A ‘no’ becomes a ‘yes’ because his colleagues like him, and will say yes to him. Our job is to redeem Sam’s trust and be one of Sam’s ‘good ideas.’

Standing there on the steps under the blue sky with the Capitol behind us, with John and Sam telling stories, is one of those moments when nothing else is needed. It is just perfect. These are good men, kind men, men who care about people, who care about those who are in need. They want to level the playing field, create opportunity for those who have not been blessed in the way we have been. At the same time, they make time for us and treat us as if we matter.

John Lewis once told us how non-violence is not a tactic. He said, “you don’t turn it on and off”. It is a commitment to a way of life. For Sam and John, friendship is not a tactic either. It is a commitment that they have made to a way of being in the world. Congressman Lewis has spoken with my groups on five or six occasions. We are not in his district, but he knows that we care about what he stands for. Apparently that is enough. Sam does not have to help us nor does his wonderful assistant Tom Tucker, but they do. No matter how busy they are they find that extra bit of time. They care about the future, not as some abstract idea, but in the practical reality of these young men and women.

Sam and John are who I hope my students will become. I don’t mean a Member of Congress, although that would be nice. I mean someone who cares about others, who is kind, who serves their community, and who mentors the future.