Today we went to Wynberg High School. There we met with students from both Norman Henshilwood High School and Wynberg. Both are performing arts schools. I was expecting the students to be really different but they were just the same as us. Although I don’t seem like it, I have always been a shy person when it comes to meeting new people; it makes me nervous. The people there were so accepting, and I think just as nervous as I was which made it easier for me to interact with them. They were just as happy to have the opportunity to talk to us, as we were to have the opportunity to talk to them. It was interesting how much they seemed to look up to the United States. When we told them we were from California, they immediately were in awe. Most of them wanted to come to California to try and make it in Hollywood. There were the typical California stereotypes but we quickly set them straight. To be fair, we also had plenty of stereotypes about them that turned out to be completely wrong. 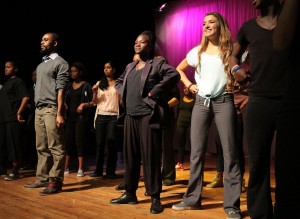 They were probably the most talented group of teenagers I’ve ever met. They did a talent show for us. I was so impressed by the singing. I would much rather listen to these kids than the popular music back home. They sang songs that I didn’t know but I assume were popular South African songs because everyone there was singing along. They also sang a few American songs and I was very happy that I could sing along. Everyone was enthusiastic about performing and supported us when we sang. It was easy to fit in. No one had to try because someone would just come up and talk to you. There was no reason to be shy because there was nothing to be afraid of.

We learned Gumboot Dancing from the Wynberg High dance teacher. It is a dance that the miners did in the mines. They used the rhythm of their stomping as an alternative to drums because authorities had banned drums. They wore boots because the tunnels were often filled with water. The dance is mostly clapping and stomping. It was empowering to learn the full dance and to hear the rhythm.

Today has been my favorite day of the trip so far. I really wish we had more time to spend with the kids but I am thankful that we got to meet these amazing people.

Astonishing is the word to describe the level of talent at Wynberg High School. Ward told us previously about how talented the students at the school were but I could not have imagined the depth of their gifts. They were absolutely phenomenal; everyone was left in awe and shock. The dancers, actors, and singers were completely mind-blowing. The performances even made Soul ask, “How do we not have to pay to watch this?” 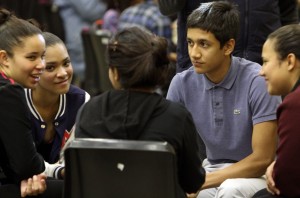 There is so much potential here in South Africa. The students at Wynberg demonstrate what happens when people are given the chance to explore and expand their character through the arts. One of the things that struck me the most was the amount of positivity flowing through the school. Every time someone performed, a cheer would rise from the crowd and the other students would actively support the person on stage, regardless of how they performed. It felt like the students came straight out of a T.V. show such as Glee, or one of those dance movies like Step Up. I imagined them playing music every break and all the other students breaking into song and dance.

This experience showed me the great importance of the arts in a culture. The arts mean everything to these kids. They are their ticket to a greater education, and out of trouble and gangs. These kids are part of the few that have the opportunity to transform their lives through the arts.

Wynberg High was such an interesting experience for me today because it gave me an inside look into the lives, interests, and values of the kids our age in South Africa. What really struck me is how even though we are here at the opposite end of the earth, they were strikingly similar to us. They like all the things we do; sports, music, TV, and so on. They also do a lot of the same stuff for fun, and they had many of the same dreams as us. For example, many of them want to make a change in the world. They want to grow up to be actors, and firefighters, and surgeons. What I noticed most about Wynberg High was how genuine and personal all the people there seemed. I also noticed how warm and welcoming they were to us and how easy they were to talk to. Our day was just incredible.

Today our class had the great pleasure of spending the day with the students who attend Wynberg High. I began the day with the expectation of having a good time, however my expectations were surpassed. I was blown away by the extreme amount of fun that we had, as well as the incredible level of talent these students possess.

We had the opportunity to perform a few songs for them and to watch them perform for us. By the time the performances were done we were soon combining our talents. The entire room broke out into a wild frenzy of dancing that lasted hours. We were laughing until our stomachs hurt and singing along to the music at the top of our lungs with a bunch of kids we had only just met, yet had already formed a connection with. Suddenly, no one cared how ridiculous they looked or how little they knew about each other. We were together, having an amazing amount of fun, and even though we are two faraway schools, from two very different places, in actuality we are not very different at all.

We all made friends today. By the end of the day none of us wanted to leave, and we even brought two of the students onto the bus with us to prolong our time with them. I made friends with a girl who had the most outstanding voice I’ve ever heard, and a wonderful personality. We were both sad to say our goodbyes, however, I soon learned that she’s been given a scholarship to UC Berkeley for her singing. She will only be an hour and a half away from me after all!