Today we interviewed Pregs Govender, the Deputy Chair at the South African Human Rights Commission. I had read her book, Love and Courage: A Story of Insubordination and been looking forward to meeting her ever since. When she walked into the room, my heart started to rush and thousands of thoughts entered my head; it was as if I was meeting a celebrity. Since reading her autobiography, she has been a role model and inspiration to me. I felt that I could relate to her on a certain level, and I was excited to learn even more about her during the interview.

I appreciated that she went around the whole room asking our names and shaking each of our hands, before she sat down and began the interview. Just from the initial introduction I could tell she was truly a kind, friendly, and approachable person. She was interested in knowing about our trip, and asked us what we had done so far before she explained a little bit about herself. She was also very appreciative and complimentary when we performed a couple of songs for her. She even smiled and danced along.

I enjoyed finally being able to put a face to the strong, yet loving personality that I had become familiar with from her autobiography. Her book portrayed her personality very well, and she was exactly how I imagined her to be. It struck me how thoughtful she was as she answered our questions. When asked a question she took a minute to formulate her thoughts, which made her answers more developed and precise. She talked about how interconnected the world really is and how many of South Africa’s issues were created through the Global Trade Market. She really believed that if you connected all the dots, you would be able to find solutions to the problems.

I asked her how she became more confident over the years and she said that it was because of the supportive people around her, which included her family and teachers. She also said she found out, “The possibility in the power of words.” While reading her book I had noticed the way in which she used her choice of words to get her point across and gain more influence in her work. I found the idea that this calm and thoughtful woman used her words to express herself, whether for work or just to be creative, amazing. It truly takes a strong person to stand up and take risks for what she believes in, especially during a hard transitional time in South Africa. That really inspired me.

Our “interview” with Pregs Govender turned out to be more of a conversation and a sharing of stories and songs than anything else. After an emotional morning, stemming from our experiences at Botshabelo the day before, our time with her was a joy and a relief. We met with Pregs Govinder in a conference room at the Human Rights Commision’s main office where she currently works as Deputy Chair. Being one of three students in our class that had read and been touched by her book, Love and Courage: A Story of Insubordination, I was brimming with excitement. I was finally going to meet this incredible woman that I had spent so much time getting to know on paper. 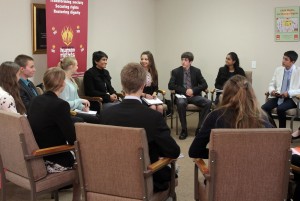 When she entered the room she smiled kindly and made her way around the entire circle of chairs introducing herself, learning our names, and taking us in with her dark, intelligent eyes. She was humble and soft spoken, but there was something very intense, full of life and fire, that seemed to radiate from deep within her. This passion was revealed often in her book and I saw glimpses of it as she spoke to us about injustice and systemic global problems, which she directly linked with the AIDs epidemic affecting the children we had held not twenty-four hours before.

Pregs Govinder listened intently as we shared our stories and questions and then in turn shared her own. There seemed to be a deep and sincere wisdom about her as she spoke and took us on as her students for the day. When she looked at me, I felt seen. Her presence was one of strength and beauty; of someone who earned the utmost respect of those around her, and who managed to remain down to earth and true to herself regardless of her success or position in society. She struck me as a person who sees things for what they truly are, and not how they have been labeled or viewed by others. Her profound courage and compassion for humanity were inspiring.

The words of her book that captured the story of her life had stayed with me in the months leading up to this meeting. Now that I have a face, voice, and experience behind them, I feel that they are more real. She is someone who I have come to admire greatly, and I hope to take what I have learned from her into my own life and experience of the world.