We walked into the Tembisa Cultural Arts Center and were immediately introduced to members of the Tswelopele performing arts group. After introducing ourselves to Oupa, the director of the program, we settled in a room where a band was practicing their songs. We listened and danced and my mood heightened as I swayed to the jazzy tunes.

After a bit, this girl walked in. She locked eyes with me and gave me a huge grin. I knew she was special, so I approached her. She told me that her name was Thembi and that she was twenty years old. Before I knew it, Thembi and I were holding hands and playing with each other’s hair. When it was time to share the songs my class had prepared we sang Lean On Me, in which I had a solo. When I sang, Thembi held up two fingers and gave an air quotation motion that I later learned meant, “I love it!” 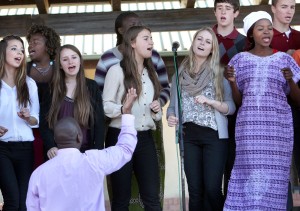 Thembi and I connected through our voices. I sang and she listened with admiration, and she sang and I listened and was inspired. Soon our voices blended and we sang together with passion and smiles on our faces. People came up to us and said that we were twins, or soul mates. Thembi said that God brought us together. She also joked that I must be part African, and asked if my mother was black. She had the best sense of humor and constantly made me laugh.

When the first day at Tembisa ended, a wave of sadness hit me because I was so used to leaving my South African friends after only spending one day with them. However, I got to see Thembi the next day and we grew even closer. She dragged me everywhere, introducing me as her best friend. We sang even louder that day and danced and laughed and a bond grew between us that would usually take months or years.

The next day was performance day. Thembi came up to me and asked if I was nervous; I replied with a truthful “No.” Over the past two days, singing with the group and Thembi has given me confidence and my voice has grown stronger. The experience has also made my love for singing even more passionate. It has grounded my dream of becoming a performer as people I didn’t even know expressed interest and appreciation in my singing. I had never really felt this before.

Before we went on stage, Thembi came up to me and put a beaded necklace around my neck, “For my very special friend, I’ve made you this necklace to remember me by.” I told her I didn’t need help remembering her but I hugged her very tightly as I thanked her. The knowledge that someone had thought of me and put effort into making something for me, just because they loved having me as their friend, brought tears to my eyes. We held each other’s hands very tightly as we walked onto the stage and sang with each other for one last time.

As we said our goodbyes everywhere I looked people were smiling with tear filled eyes. I’ve lost count of how many pictures we took. Spending three days with our friends made the goodbye that much harder, but it was very worth it. My experience at Tembisa is something that I will remember for the rest of my life for it sculpted me into the singer I’ve always wanted to become. I left Tembisa with new friends, memories, and some African spirit that I can’t wait to bring to Santa Cruz. 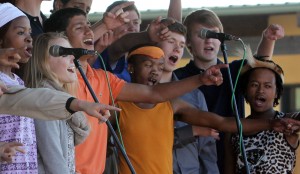 We performed in front of a large audience at Tembisa today. However, that was not the highlight of the day for me. What I found most important was seeing and feeling just how close a relationship we developed with the people there. We have spent the last three days with them singing, dancing, and visiting. It has been amazing to see them open their lives and selves to us as though we have always known them. It’s not something that can be put into words. Everything, every interaction just felt…comfortable. There was really a lot of trust and kindness. That our final day together was so special just made it better. Today was a great day filled with sunny, smiling faces, and a relaxed easy-going mood. It was a day that I will truly remember for the rest of my life. It was unforgettable because of the people there and the love that they showed us.

I took a breath. My new friend, Sarah, squeezed my hand. “Ready?” She asked, and smiled. The stage was full – a mix of our class and the incredibly talented performers from Tembisa. I knew that with them amongst us there was only so much that could go wrong, but I could also see flickers of doubt on the faces of some audience members. We were just a bunch of American teenagers who had only had three days to prepare. We were singing and dancing on the stage of the Tembisa Cultural Center. I had come to realize that the people we were performing with dedicated an enormous part of their lives to practicing and perfecting their art. Who were we in comparison?

I looked around. The stage was bright. Each person on stage was dressed in the clothing of his or her own culture. From Zulu warrior skins and furs to traditional Mozambican attire to our American “quality casual”. A blending of existence, both past and present, was really a sight to wonder at. As all of this ran through my mind, I lost track of everything but the whole. The music had started. I was moving my feet to the rhythm, a part of the stage coming to life. I remembered another girl the day before leaning towards me and whispering, “Become the music. Let it move you. Feel the ground and the rest will come.” She was right.

One of the songs we sang was “Shosholoza”, a piece that the MMS group had learned at that very place two years ago. It was familiar to every person in the audience. Any hint of doubt or fear melted away, and what remained was a feeling that I will always remember. I had a sense of pride, mild surprise and overwhelming happiness to be there and present in that moment. The audience was wild with energy, a small sea of sound and movement. The faces that looked up at us were smiling. We were just a bunch of young teenagers on a stage, but we were having fun and our energy made us a part of something bigger. Through the music we recognized one another’s cultures. We sang life into the history of each of our countries, honoring the struggles and successes that got us where we are today. We honored Madiba, a term of endearment used to refer to Nelson Mandela, in his final stage of life, and sang to the continual protection of human rights and unity that he lived for.

Our new friends, the people that we experienced and created this with, shared something very valuable with us. They brought a level of meaning and strength to music that I, as a music lover, had never really understood. Entirely without judgment they taught us how to move beyond our comparatively dull and awkward American “sway” in ways that made even our voices richer. They showed incredible openness to us as individuals and as a part of their group. I believe that they gave us confidence as our own group. I do not doubt for a second that we will take these gifts back with us to our beloved mountain and home. We have had far too much fun with our new “African spirit” to not share it with the world.