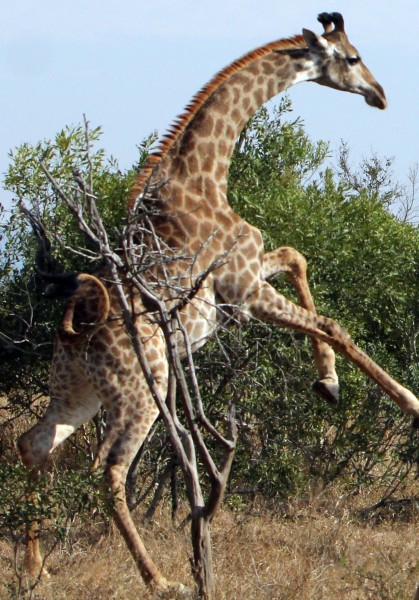 As long as I can remember giraffes have fascinated me. As a kid I wished that I had a pet giraffe; they seemed like an alien creature to me and I couldn’t help but want one as my own. With their long necks, beautiful round eyes, elegant eyelashes, bluish tongues, and unique patterns that no two giraffes share, I couldn’t help but be intrigued by them. In school whenever I had a chance to do a report on an animal of my choice, I picked the giraffe. No matter how many times I did a report on them I couldn’t get enough, and I was always captivated to learn more.

When we came to Swaziland I couldn’t wait to see these magnificent creatures in their natural environment. I had seen giraffes in the San Diego Zoo as a young child, and spent the whole time marveling at their beauty. When I went to Disney World, I stayed at the Disney’s Animal Kingdom Lodge and got to experience giraffes walking right outside of my hotel room at all hours. However I was excited to see them in their own environment rather than in a man-made environment created solely for the benefit of tourists. Our visit to the Mkhaya Game Reserve in Swaziland would be my first time doing this.

I was graced with the opportunity to sit in the front row of our Land Rover. The second the Mkhaya Game Reserve gate opened my eyes were pealed for giraffes. We saw other animals that interested me, but all along I was waiting for the exciting encounter with the giraffes. As we drove along the bumpy, reddish soil path, going over rocks and passing trees, all of a sudden someone pointed out giraffe heads looking down at us, watching very intently. Our driver Bongani stopped so we could admire them. As I looked up I thought about how I had been waiting for this moment for so long. My eyes opened with excitement. I looked into the eyes of what I had dreamed of seeing, a free giraffe that was in its own habitat. You could see how calmly yet intensely, they were looking at us, accepting us on their land, welcoming us with their exquisiteness. I felt like I knew everything about giraffes, due to all the research I had done on them including the report I had done for this trip, but I was mistaken.

Seeing the giraffes in their own habitat, interacting with one another in a way that is natural and uncensored, knowing that they are not being watched by thousands of people, cameras and zoo workers, was different from what I experienced prior to this. They moved fluidly and for the most part didn’t seem to mind us watching them. I was fascinated by the way they moved because they were so much bigger than I had imagined. Everything they did was distinct from the other animals in the reserve. They looked peaceful as they tilted their heads to eat the branches and leaves that no other animal could eat. I watched them and studied every move they made so I could completely engulf myself in their presence. I enjoyed every moment with them. As we left the tower of giraffes I felt satisfied. I had gotten the opportunity to see them in their natural habitat; something I had always dreamed of doing.

Today we participated in one of the most anticipated activities of our trip, a safari. I will not soon forget this experience. It started on a dirt road that our fearless bus driver, Mavis, led us down. The road was an extremely bumpy and harsh terrain, but Mavis navigated it like a pro. When we reached a riverbed, a small boy informed us that we were not supposed to drive the bus down there. We turned around and returned to the parking lot. Once there, a Land Rover Defender, that ran as silently as a ghost so as to not scare away any animals, awaited us. A man named Bongani greeted us. He was to be our guide for the day.

The way I see it, a safari consists of a few of my favorite things acting in concert to create an unforgettable experience. The first aspect of this is the off-road portion, where one gets to conquer roads, or the lack thereof, in a machine that is truly all-purpose built. The next part is the most obvious, seeing the animals. Seeing the animals was truly awesome. They are so graceful even in stillness, and each has its own quality that will enchant you and take full and complete control of your thought process. The third part, that truly brings the whole experience together, is the human interaction. This was made especially clear through my experience with the people whom I was sharing a vehicle with, including our driver Bongani. He was a master of plants, animals, driving, and being an overall super loveable guy.

The moment of the safari that I remember the most vividly, was one of our final moments on the reserve. We stopped at a watering hole on the way back to our bus. It had the most amazing view that any safari goer could hope for. It was an enchanting lake, with glass still water. On the opposite bank we saw three rhinos, three giraffes, and a family of warthogs, who were later replaced by impalas bounding through the tall grass. This last experience was a perfect ending to our time on safari.

Later on in that action packed day, Ward told us that we were going on another adventure to a theater club. Once there, we would have the opportunity to interact with some Swazi people. We had a very interesting Q and A session. During it, I noticed a particularly inquisitive man and I invited him to have a conversation over dinner. His face immediately lit up and he looked like he had won the lottery. He was so excited to talk to me that he completely forgot to get dinner until a man approached him and made him get some food. The questions that he asked me really helped me to understand him and his culture a lot more. The things that he asked seemed so simple, but they really showed me how little I knew about Swaziland. Any misconceptions he had about America, I had a thousand more about his culture. We covered so much content. Soul also joined the conversation and was really good at helping explain things that I had trouble with.

The first thing he asked me was whether or not Canada was a part of the U.S. Later we went on to discuss the system of presidential elections, the production of films, and how it was possible that human beings could survive in conditions where there was snow and ice. At the end of the night, we exchanged e-mails and I gave some of the strongest hugs I have ever given. I can’t wait to contact him because I am sure that every time we talk there will be a great exchange of knowledge in store. 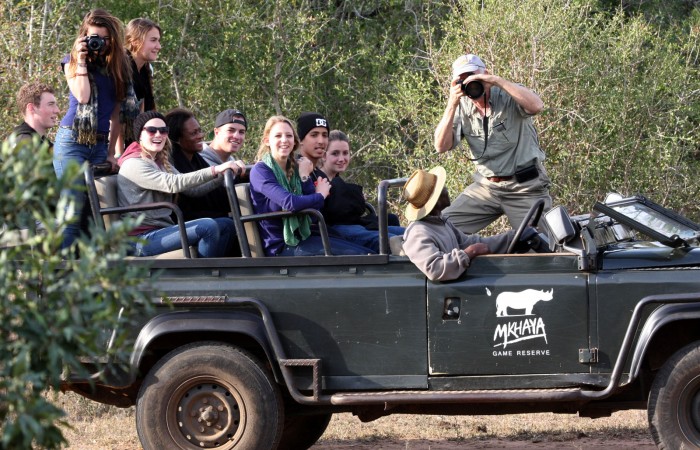