Admiral Stephen W. Rochon served many years in the United States Coast Guard and is the former Director of the Executive Residence and White House Chief Usher. 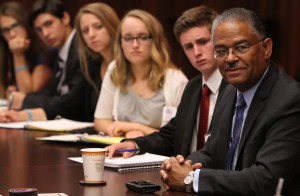 Admiral Stephen Rochon spent much of his career in the Coast Guard. He left when he was asked to come to Washington D.C. to serve as Chief Usher and Executive Director of Residence at the White House during the George W. Bush administration.

When the Admiral entered the room he had a special aura about him. Before he said a word I could tell he was compassionate. He answered our questions in a very personal manner. Each reply included a story either about his time in the Coast Guard, or his service in the White House. I could tell from the constant smile on his face that he was grateful to have experienced all that he had. It was a great opportunity for me, as I made a new friend and found a positive authentic role model.

Admiral Rochon was an interesting person to interview. I enjoyed his attitude, his openness and great personality. He was a wonderful storyteller and I found his incredible life inspiring.
Admiral Rochon shared with us an inspiring story about his work after Hurricane Katrina. He said that he decided that it was important to figure out how he could support the Coast Guard sailors working to help people affected by the hurricane. He and other high-ranking Coast Guard officers discussed how to help the families of the sailors putting their lives at risk. During this process he reached out to a vast array of individuals and asked for help determining a plan of action. They all recognized that they needed to put aside their egos and rank in order to get the job done.
I think stories like this illustrate his leadership style and humility.

Something he said that struck me was, “It never hurts to accept a challenge.” That resonated with me because I think trepidation and timidity prevent many people from experiencing all that they can in life. It also inspired me to recognize opportunities and participate in them even though they may seem a little too challenging. 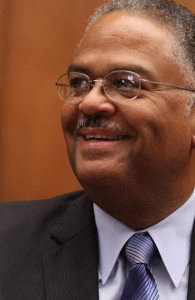 Personal. Engaging. Inspiring. Leader. This is what comes to mind when I think back on our interview today with Admiral Rochon. He answered our questions with stories. One thing that he kept coming back to was the fact that he never backed down from a challenge. He was raised by a single mother and finances in their household were tight. His circumstances made him have to work even harder for what he wanted to achieve. Even though as a child he experienced hate crimes, for example people throwing bottles at him and calling him names, he never lashed back out at society. In fact he did the exact opposite. He became an Admiral in the Coast Guard.

The story about his path to becoming an Admiral is one that I will always remember because it is so inspiring. When he started out as an enlisted sailor, his commanding officer ordered him to do things that no man should ever be asked to do. Instead of being bullied and going with it, he stood up for himself and through a turn of events, came out on top. He quickly advanced through the ranks and when he outranked the officer that had mistreated him he did not use his authority to get back at him. He said one of the most important things to do is to, “Be led by what is the right thing to do.” The only way to correct wrongs that have happened to you is by doing the right thing. This is one of the many things that struck me during the interview. I will definitely remember this interview for years to come.