Ray Suarez is the host of Inside Story on Al Jazeera America. He was a senior correspondent on the PBS NewsHour until 2013 as well as a host on NPR’s Talk of the Nation.

Today we had breakfast with Ray Suarez and got the chance to ask him some questions. He blew me away. It seemed as if everything he said had been prewritten by an author who had months to research and prepare for the interview; and yet, I could tell that that was just the way he speaks, effortlessly. 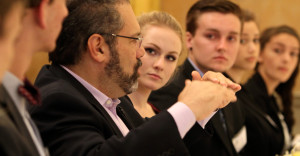 Going in we had very little idea of what to expect. Most of what we knew about him was in the context of the news. He had a dry wit that I found very appealing, and a smooth, deep voice that made him easy to listen to. Every question we asked he seemed to understand in a way that seemed almost impossibly fast and intensely deep. For example, when asked about news organizations being “tied” to investors who are controlling the information the public gets, he went on a brilliant, insightful, and seemingly accurate rant about the current lack of distinction between fact and opinion in modern politics, and social issues in general. He knew the importance of what he was saying; he was very clear and gave specific examples. He also kept saying “and once again, fact trails opinion” in a perfectly simple, understandable way that beautifully counteracted the very core of the problem he was addressing. So often today people seem to feel that the way they feel about something, or the way they want something to be, is actually as valid as actual data and science. Somehow we’ve gotten to a point where entire groups are so fearful of change that they have “stepped back,” as Mr. Suarez said, and withdrawn from reality. To hear a deeply religious man confidently and unapologetically assert that an opinion which contradicts fact, is actually somewhat unimportant, and not particularly interesting, was exciting for me because I think it represents the exact type of honest discussion we need to be having in 2014. We need people like Ray Suerez, who have found a form of faith that encompasses all of the beautiful morality in religion, to create a form of scientific, rational belief that has the best of both worlds. I am stoked about this man, and I can’t wait to see how he continues to make an impact in the world. 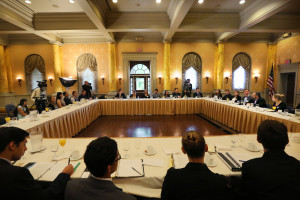 Ray Suarez is a man of integrity, humility, and reverence. Our interview with him today has been one of my favorites thus far. He spoke about many different things, eloquently articulating his experience as a newsman. I have always wondered what goes on behind the closed doors of each news organization, and I had put together my own picture of what it looks like. My classmate, and friend, Daniel Clifton asked a question about this. I was surprised at how close to the truth my prediction was. In Ray Suarez’s response to this question he spoke about how often opinion overrides fact. The way he explained it, people don’t like to look at the numbers and statistics, and instead choose to go with their gut feeling or preconceived notion of how something is. I think that it is true that people choose to believe what they think is factual even if there is proof that their opinions are inaccurate, simply because it is often more convenient. This observation about today’s news viewers helps me understand that news casting organizations have a much harder job than I previously thought. It is now much more difficult to transmit important information because people are reluctant to believe everything they see. Not all information that gets broadcasted is completely factual, and because of this people have been put on edge, and don’t trust news sources as much anymore.

I found everything Ray Suarez said this morning to be profound and interesting. I enjoyed listening to him speak. He has set a high bar for the rest of our interviews.-Soul Kerr

Our interview with Ray Suarez was way too short. He answered our eighth question, and promptly said, “I need to go.” It was like waking up from a great dream. The way he spoke was completely captivating. I couldn’t help but love everything he said. If he said anything wrong or misguided, I had no idea. As far as I’m concerned everything he said was true. It was all so compelling, and it seemed as though he really had a great sense of history and the way the world works. 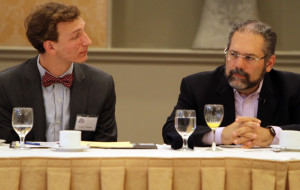 I read his book The Holy Vote, and part of his book Latino Americans, as preparation for this trip. He speaks the same way he writes; in long, beautiful sentences with metaphors placed perfectly throughout. When he talked about the concept of sheltering children, he told us that keeping his daughter “in a padded cell while I have the key on my belt” would eventually fail when he is no longer able to be there. This metaphor struck me as an incredibly subtle and a perfect example of his expert use of language. The way he was able to answer our questions so completely, and poetically, knocked me out of my chair. At one point, I think I almost started crying because I couldn’t believe how much I was enjoying the interview. I’m going to finish Latino Americans on the plane ride home.