Alyse Nelson is the co-founder and President/CEO of Vital Voices Global Partnership.

In 1995, when Alyse Nelson heard about the United Nations Fourth World Conference on Women in Beijing, she knew that she had to go. Insignificant matters such as visa complications, transportation snafus or timing could not stop her. Ms. Nelson’s intuition told her that she had to attend, that this event was important. It was at the Beijing conference that Hilary Clinton made her famous speech in which she said, “Women’s rights are human rights, and human rights are women’s rights.” This statement propelled Alyse Nelson onto the track that eventually led to her co-founding Vital Voices with Hilary Clinton and Melanne Verveer. Today she is the President of the organization. 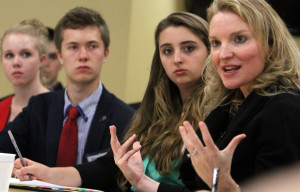 In response to a question pertaining to Alyse Nelson’s intuition and how she was able to get as far as she did by using this skill, she said, “Taking risks never failed me, even when I failed”. The stigmatization of risk taking has kept me from accessing many of the opportunities I have been presented, whether learning a new skill, or growing from my mistakes and moving on. I often forget the true value of taking risks and failing; true learning is derived from failure. If Alyse Nelson gave up on traveling to Beijing to attend the Women’s conference after the first rejection of her application for a visa, Vital Voices may not be doing the amazing work it is today. The world is full of opportunities to learn. It only takes the courage to take a risk or make an intuitive leap to grasp those opportunities.

The minute Alyse Nelson walked into the room I could tell that she was going to be easy to listen to. Every time I blinked or paused to take a note, I felt like I was missing something because everything she had to say was worth remembering. She was completely present with us from beginning to end. This was one of my favorite things about her. So often in America we rush from one thing to another without thinking about what we’re doing that day. People go through their lives in a hurry and then one day they stop and think, “How did I even get here?” Alyse Nelson showed me that you could be a busy person and still love what you do. She spoke with love and passion about her job in a way that I haven’t seen from many people.

When she shared experiences from her life about failing and taking risks, I realized that when she was our age she had been like us. There was a time in her life when she didn’t know what she wanted to do. Mentors such as Hilary Clinton and Melanne Verveer inspired her and helped her find what she wanted to do with her life. Alyse Nelson shared with us a quote from Arianna Huffington about failure, “Failure isn’t the opposite of success, it is the stepping stone to success.” This made me wonder why I don’t fail more often. One of the reasons why Ms. Nelson was easy to relate to was that she was vulnerable. Her vulnerability showed me that she was human just like everyone else. It was her humanness led her to a successful and fulfilling life.

If Alyse Nelson can have a career doing what she loves, inspiring women to follow their dreams no matter how bold they are, then any passion is worth pursuing. She told us, “Power expands the moment it is shared.” To me this means that if you have knowledge and a love for something, you should share that knowledge and love with the world. I was also struck by how she defined a leader as, “Someone who is motivated to step forward and take risks.” She continued on saying, “Leadership shouldn’t end with you. ”

Whether we acknowledge it or not we affect people in everything we to do. What we leave behind will make a difference and who we choose to be does matter. We should pursue our dreams whether we have big, small, simple or complex dreams. What we do with our lives matter to the world, so it should matter to us as well. As Alyse Nelson beautifully said, “Go in the direction that drives you and makes your heart sing.”