Daniel Tangherlini is the Administrator of the General Services Administration (GSA).

Today we met with the Administrator of the U.S. General Services Administration, Dan Tangherlini. As soon as he entered the room, I could tell that this was going to be an interesting interview. I wasn’t mistaken. He was energetic, humorous, and clearly passionate about his position.

I was continuously surprised by what Dan Tangherlini had to say. I especially enjoyed hearing about how he had restructured the hierarchy of the GSA to create an inclusive environment. His goal was to inspire a better relationship between worker and leader. I also liked hearing how his beliefs were implemented into the GSA to create a highly efficient system. He did this by pushing for continuous improvement through collaboration and assessment of data. There wasn’t a single second when I wasn’t deeply entrenched in what he had to say.

What struck me the most however, was when he said, “`Find success for yourself. Don’t let other people determine what your success is or will be.” When I heard him say this, I almost immediately applied it to my internal behavior. For the longest time, I have relied deeply upon other’s criticism of my own behavior as a guiding line for how I should act. Hearing this, I started to question this behavior, thinking to myself, “If I rely upon others, how will I follow my own passions?” Because of this experience, I have learned a very valuable ideal. Though I have heard this message many times before, in other interviews with knowledgeable individuals, the way Dan Tangherlini conveyed it was what set the learning in motion. All I really have to do is follow my passions. As Susan Molanari said later that day, “The road to where you are going is not always clear, but if you are true to your values and your passions, you will get to where you want go.”

“When I first got an iPhone, I felt like I had mugged an alien or something!”

As the room burst into laughter, Daniel Tangherlini gave us a sheepish grin and joined in. Coming into the interview, I was not expecting to find the Administrator of the GSA to be a man of such humor and spirit. From the moment he walked into the room, Mr. Tangherlini sought out a personal connection with each of us. He broke down the barriers that came from being an adult with thirty unknown teenagers by creating a lively and meaningful conversation. 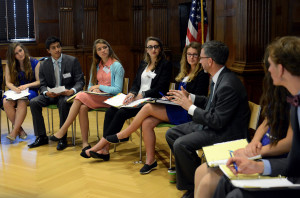 Mr. Tangherlini is a man who lives up to his words—he believes in collaboration, teamwork, and the importance of trying and failing. The beginning of our interview set the stage for Mr. Tangherlini as an administrator, delving into his reforms within the GSA. These included tearing down all of the walls in the office to cultivate more discussion and interpersonal relationships among colleagues. The latter half of the interview showed the internal side of Mr. Tangherlini, demonstrating the depth of his humility and the honesty behind his words.

As with every interview, our final question was a request for advice as we head forward on our journey into adulthood. After a slight pause, Mr. Tangherlini said, “If you don’t limit yourself, you’ll find no limit to where you will go.” Just as he had torn down the walls in the GSA office, Mr. Tangherlini has not created boundaries for himself in terms of what he is setting out to accomplish, and this is what has brought him to where he is today. The only thing that holds us back is ourselves. If we open ourselves up to possibility, then the world becomes a door wide open to anywhere we want to go. As Mr. Tangherlini said, “Why not try?” If there is anything I will take away from this trip and carry with me for the rest of my life, it is this sentiment that Mr. Tangherlini, and so many others, has communicated to us over the past nine days. There are no limits. There are no boundaries. Everything is an opportunity, and it is always your choice whether you will grab onto those opportunities or allow them to slip through your fingertips.