Susan Molinari is the Vice President of Public Policy and Government Relations at Google in Washington, D.C. 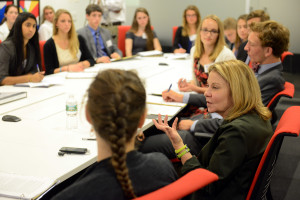 Susan Molinari, Vice President of Public Policy and Government Relations at Google said, “It isn’t always the best or the brightest that are successful, but the most resilient.” In the interview, she emphasized the importance of failure in one’s life, and how the ability to spring back from it, and press on, is one of the best qualities a person can have. I aspire to have the kind of resilience she refers to, but am not looking forward to the failure I will have to endure to build this resilience. Coincidentally, she also said, “We’re all afraid of failure, and prefer that it wouldn’t happen, but failure is the road to success.” It will take time to fully sink in, but I think her words put me on a track to accepting, if not embracing, inevitable failures.
A constant theme we have seen in these interviews is that without uncomfortable situations and failure, there is no way to grow or advance. I hate the unpredictability of life, but interviews like the one we had with Susan Molinari make me realize that the unknown rarely ends in catastrophe.

Another thing she said that stood out to me was, “Everybody has scars you can’t see … don’t let your scars get in your own way.” She said that we are usually so paranoid that others can notice our insecurities that we don’t even realize they are only thinking the same things about themselves. I often find myself so involved in my own mind that I don’t realize that no one else notices the things I notice about myself. 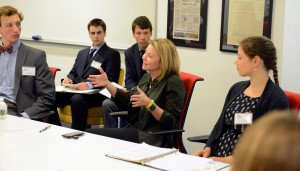 The overall message I got from this interview was just to let go. Let go of the fear of failure, it will come no matter what, and it is more useful to just prepare for it rather than cower from it. Let go of insecurities because they only serve to hinder, and usually aren’t as big a deal as my dramatic, teenage mind portrays them to be. Both of these are not easy life reforms – but not impossible – so if I start working on them now I might be ready for life before long.-Alyssa Feskanin