Today we interviewed Congresswoman Loretta Sanchez from California. It being our sixth consecutive interview of the day, we were all fairly tired by the time Congresswoman Sanchez walked into the room. However, the energy she brought with her soon reinvigorated us. A couple Mount Madonna School groups had met with Sanchez in the past, so we had heard a lot of positive things about her. We were excited to meet her ourselves. We also felt pressure to ask good questions to prove that we were as competent, if not more so, than any classes she had previously met. 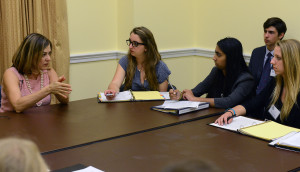 Since a congressional vote was looming, we were forced to make the interview shorter than we had previously anticipated. So, we picked out the best questions from our list. Having a clear idea of who would be asking questions, we stood prepared as Loretta Sanchez entered the room, and sat at the far end of a long table. I was immediately impressed by her confidence, and I felt all of my butterflies disperse just by being around her joyful personality.

The interview progressed well. Congresswoman Sanchez answered all of our questions thoughtfully and insightfully. She started out by saying that “goodness is an individual trait,” and that she always tries to do at least a single thoughtful thing a day so she has something to feel pleased about. She then said that when one person’s rights are degraded, so are the rights of everyone. She said that we are truly, and deeply, affected by the emotions of those around us. She said that in order to get things right you often have to fail many times, yet if you truly put your all into an attempt, it can never be seen as a failure. Lastly she told us that in order to get something done which matters, you need to fight for it from the inside, but you require the support from those outside the issue to give you confidence.

Unfortunately the interview ended too quickly because of time constraints. Yet, despite the interview’s short length, I felt assured that our group successfully defended the reputation of our school and our Values program, and I was personally impacted by what she had to say.

It was nearing the end of our nine-hour day. I was beginning to think the next two interviews would be a smooth ride to the finish, when in walks Congresswoman Loretta Sanchez, with a personality as bright as her pink dress, and as big as the building. 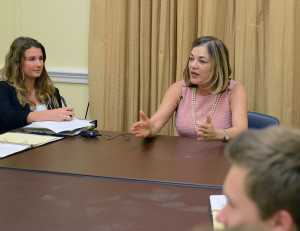 The slogan of the day; “I wish we had more time with them…” rang especially true for this interview. If we only had more time with Loretta Sanchez we could have really gone past the surface to the truly vibrant person that was inside her, and probably could have heard some really great stories. Even with the limited time, I was absorbed in our conversation about what it means to be confident, and for that I am truly grateful. When asked a question about if she has noticed a “confidence gap” between women and men she responded, “If you’re asking me personally if I have a confidence issue, that’s not my problem,” she said with a laugh, “It’s funny because I was the most shy kid in the world.”

Another thing that struck me was when Congresswoman Sanchez referred to us and said, “We have an amazing machine right here, no kind of computer can replicate what we are.” I had never thought about this in depth before, and it made me realize that we are a very unique species. She said so many things that stayed with me, and all of them made me reevaluate my confidence level. For anyone that read my blog on Susan Molinari, I briefly talked about insecurities and how Ms. Molinari helped me see that I can let go of them. Similarly, the interview with Loretta Sanchez inspired me to shake off insecurities and have confidence in myself and abilities. 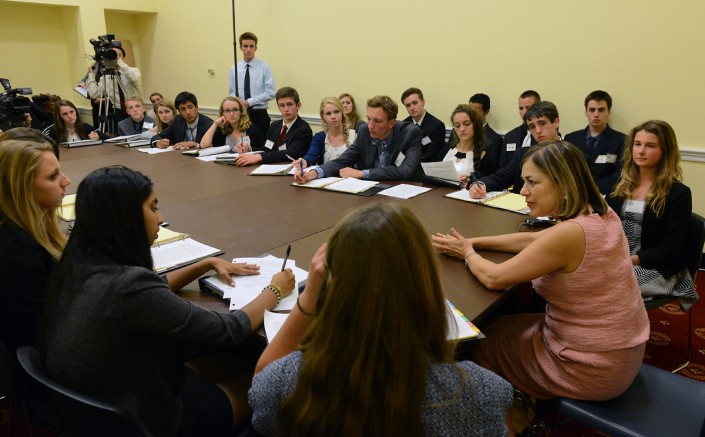