In his book Man’s Search for Meaning, Victor Frankl constantly repeats the phrase, “Everything can be taken from a man but one thing: the last of the human freedoms—to choose one’s attitude in any given set of circumstances, to choose one’s own way.” Rinchen Khando, the founder of the Dolma Ling Nunnery, is one of few people that truly embody this sentiment. As a Tibetan Refugee she realized early on that it is detrimental to living a full life to allow oneself to create a victim mentality around one’s experiences. From the founding of her organization, the goal was never to create a place for nuns to just live; Rinchen Khando wanted to create a place for nuns to live, study, and learn the skills necessary to fully support themselves. In her opening statement she made a point to say, “Save Tibet. But more than that, contribute something to society.” This objective is extremely admirable to me because she, and the women that she works with, have not only escaped the trap of victimization, but feel that it is a necessity to give back to the community that took them in. 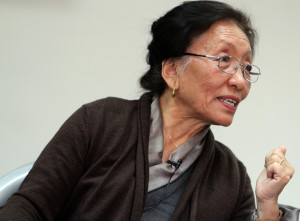 Another statement that struck me was, “Don’t think we are really happy here. But smiling is better than crying.” It was deeply inspiring to hear that after fifty years of exile, the most imperative goal is still to go back home to Tibet, and that while the struggle to free Tibet still rages on, the refugees have managed to find happiness, despite the adversity they have had to endure.
Since reading Victor Frankl’s book at the beginning of my junior year his message has stuck with me. Seeing his views brought to life in Rinchen Khando was an awe-inspiring experience. While maintaining a humble and gentle demeanor, she is able to convey a strength of character and willpower that I have never seen in anyone else. 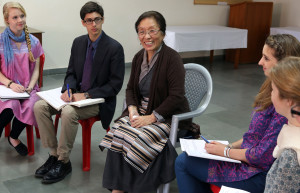 “No matter what you say it is always the stronger that wins, isn’t it?” Rinchen Khando asked us this question toward the beginning of the interview. I didn’t expect her to say that. I could tell from our research and our time with her that she felt very strongly about protecting and conserving the Tibetan culture. A whole nation of hardworking, harmonious Tibetans, that are caught in the dilemma of making a home in India and trying to make a way back to their home. They are like a bunch of peaceful seagulls caught in an unwelcoming storm. Having been away from Tibet for three generations, the Tibetan people are having trouble keeping their culture alive. With an upbeat, realistic demeanor that truly shows the pain and everlasting service to her country, Rinchen Khando said that the struggle will go on for a much longer time.

We drove up the windy dirt roads, leaving the smog filled city behind, heading towards the glistening white mountain-tops of the Himalayas, finally reaching Dharmashala. In Dharmashala we had the pleasure of meeting the Dalai Lama’s sister in law, Rinchen Khando, the founder of the Dolma Ling Nunnery, an organization committed to educating and supporting Tibetan nuns living in exile. This extraordinary organization’s ultimate hope is to preserve the unique Tibetan traditions and culture, while they are living in exile. Rinchen Khando started this project because she wanted to provide facilities and opportunities for Tibetan nuns. Her dream is to help create an environment where the scattered culture can be preserved and thrive. Through my research, I could tell that Rinchen Khando is an exceptional woman. After speaking with her for just one short hour not only did she exceed my expectations, she left me thinking about priceless concepts and values that continue to flood my already overwhelmed brain. 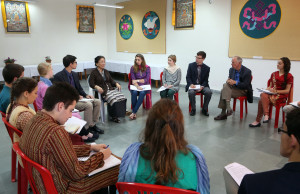 Rinchen Khando spoke of the absolute devotion and dedication that she carries for the Tibetan culture. We were curious how a culture could continue to grow even after so much devastation, so we asked her about it. She said that the Tibetan culture is something that is carried through the people, not necessarily the place that they call home. Culture is expressed through thoughts and everything must come from within to truly embody the meaning of culture. The amount of hope that Rinchen Khando expressed for a possible free Tibet demonstrated strength and courage. She takes this hope and provides a sanctuary for those living in exile, as well as the opportunity to become empowered, and discover their own dedication and motivation to continue to thrive.

During our interview Rinchen Khando said, “It is not worth crying over suffering.” This exemplified her positive energy and her ability to overcome adversity. She does not allow anything to get in the way of her preserving her culture and assisting others in that same quest. The strength Rinchen Khondo demonstrates in her approach towards life, and the situation that she has been faced with, is inspirational. After hearing her story and learning about how she responded to the hardship that she and many others are facing, I have been inspired. I now know that you can approach even the hardest things life throws your way, with humility and happiness. 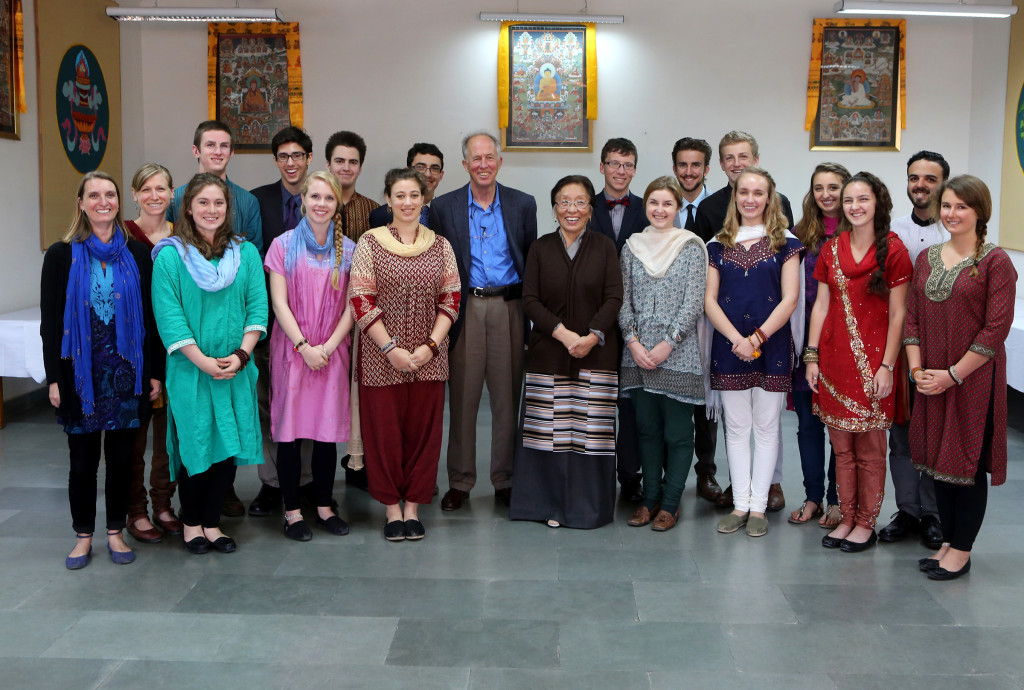