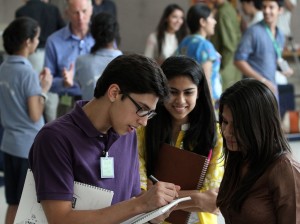 Today we arrived in Delhi at around 5a.m. and headed straight to the bus. We drove to the Heritage School’s conference center. Our gathering place was two large rooms, underneath a pond with glass pyramid roofs. Soon some students from the Heritage School arrived, quickly followed by students from the Pathways World school. We knew that we had to suck up our tiredness, and our nerves, so that we could go and introduce ourselves. The Heritage and Pathways kids were very similar to us. Their parents, much like our own, have decided to send them to schools that are devoted to changing what it means to get a good education. The kids were beyond awesome and I felt very at home with them. We talked to each other as though we had known everyone for a couple of months, not a couple of minutes. Everyone in my class seemed to find people to whom they could relate. I, for instance, found myself surrounded by the nice nerdy people who had all watched the same shows as me or read the same books, and I felt very at home. So, in the briefest of summaries, all I can say is that now I have a couple more amazing friends. (^_^)!

“I don’t want to take tests. But if I don’t take the tests, then I won’t be successful. I won’t get a job and I won’t make money. And then my life will be nothing.”

Yesterday was truly a gathering of gifts. We had the opportunity to meet with kids from Heritage School and Pathways School at Samvaad, a conference meant to create dialogue and connections. Over the course of the morning and afternoon, we shared songs, dance, art, and discussion, breaking down barriers between cultures and country borders. And throughout it all, we tackled one of the greatest questions plaguing our generation—education, and how it needs to be changed. 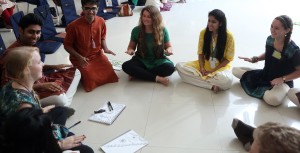 When Ward asked us what we would change about the education system, the room immediately became charged with energy. Voices were raised as passion grew, kids becoming more and more excited as they finally put words to what was not working for them and forcing them to stay in the constant cycle of stress and anxiety. As I listened to the kids from Heritage and Pathways talk, I couldn’t help but sit in stunned silence. Across the world, kids are facing the same problems with the education system that we are back in the US. From a young age, they are told that they need to get a degree in something applicable to life, like business, in order to make money because without money, they will not be safe, happy, or successful. But before they get a degree, they need to get into college, which means they must get perfect grades and perfect test scores. And if they don’t do this, they will be a disappointment.

A boy in my group had stayed silent throughout the discussion, but as the hubbub began to die down he raised his head. In a soft, nearly too quiet voice, he said, “I wish I was allowed to make mistakes.”

Around him, all the kids nodded their heads. One nearly jumped out of his seat as he yelled, “Exactly! Exactly!” The speaker gave a shy smile that continued to widen as the kids around him expressed their agreement, and in that moment I felt so proud. Proud of the boy who found the courage to speak, and proud of these kids who weren’t afraid to stand up and call out the system that is tearing them apart. And it was then that I knew—I was looking at the faces of change.

Samvaad left me feeling more connected to India than any other experience I have had on this trip. The kids I met were so similar to me, expressing the same angst and frustrations that I have had with the education system, and asking themselves the same big questions—“Who am I? What is my purpose?” They have dreams like mine, dreams that are so big they sometimes seem impossible, yet there is no doubt in my mind that they can accomplish them. As I looked around the room at the sixty-plus faces that were discussing, laughing, and singing, I knew I was seeing the revolutionaries. The kids we met yesterday are going to be the ones to change India, and in turn change the world. And I know that on the other side of the globe, my classmates and I will be doing the same. 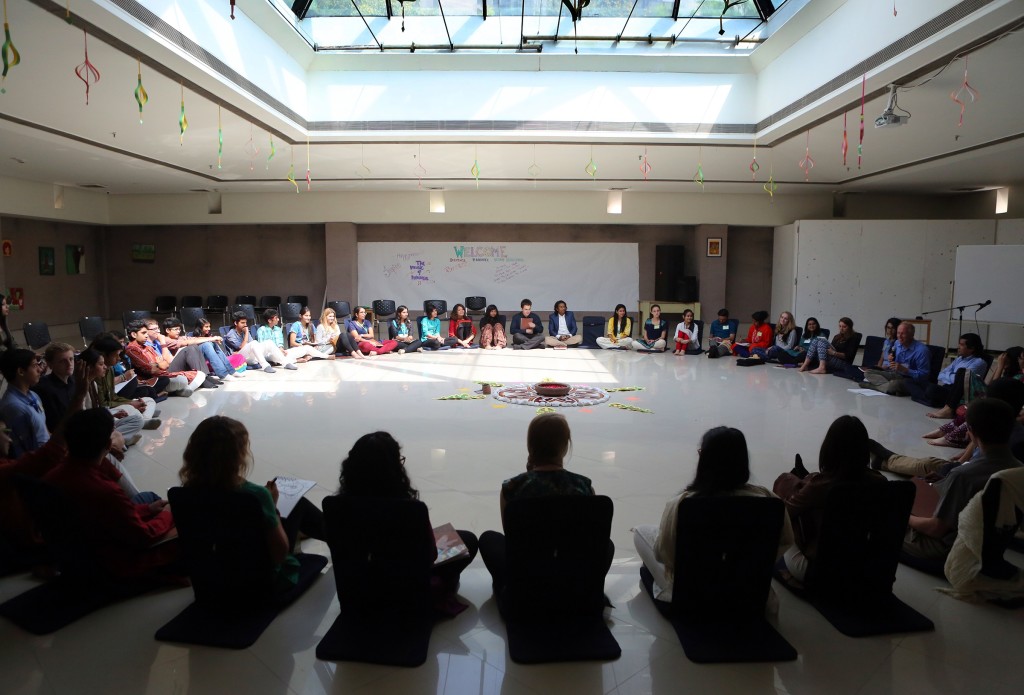