When I first saw Thulani Mabaso, I immediately wanted to hug him.  He stood tall (his nickname was “Ostrich” in prison), New York cap, and pretty almond eyes framed by long lashes and glasses.  He was quiet at first and spoke softly. However, after we moved into a little room covered in images of letters from inmates’ families and he started telling us his story, he became more animated and outspoken. You could see him reliving his story as he told it. He recounted the bombing of a government building that got him placed in prison and the horrible methods of torture that he had to suffer through. 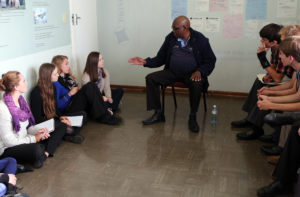 Everyone in the room was captivated by the raw emotion Thulani expressed while telling his stories. It stripped away any shyness I felt and opened up my ears and heart to his experience. When he told us about his experiences as a prisoner on Robben Island, he got up out of his chair and sat down on the same floor that we were sitting on so as to demonstrate how his hands and feet were tied up. He then lay down on his back, bald head on the cold ground, and showed us how he was further tied up and tortured. In the midst of reliving the darkest time of his life, he stopped, took a few deep breaths, and let a solitary tear roll down his cheek. This tear was followed by another, then another, while we all sat in silence. The silence was not awkward or uncomfortable but rather respectful and patient. He cried later, a second time, and this silence was understood.

I sat quietly, processing how he had been tortured and dehumanized, forced to poop in a bucket and wear clothes covered in lice. How he tried and failed to kill himself with a handful of pills, how his dad had been shot eight times the day before his visit on Robben Island, how he had been turned in and betrayed by Mike, a fellow comrade whom he thought he could trust.  I understood why he cried, why he opened up to us with such emotion, and why he was able to talk about it now. He told us, “You cannot do things alone; people are your strength.” He found his strength in those who showed humanity, in those who listened to his journey, and in those who simply wanted to hug him. 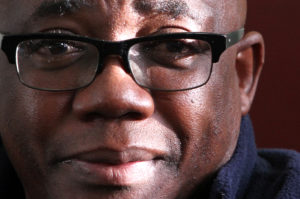 Thulani means, “quiet.” However, the man we met today was not. Thulani Mabaso’s vibrancy painted pictures in our minds that shook our souls. His raw vulnerability swept over me, and I found myself hanging onto every word he said. Throughout the interview, the sun was shining, slightly blinding me, but as tears began to fall from Mr. Mabaso’s eyes the sun disappeared and the room grew silent. This was the first time Thulani was quiet. He had opened up to us about his past so much so that he became emotional. The silence was comfortable and warmth blanketed the room, even with the sun gone.

After Thulani was done telling his story, questions erupted around the room. We were eager to hear more. He boisterously retold his experiences to us with noises and gestures. He would make the noises the cell doors made as they closed. He would lie on the ground to show us the position he was tortured in. He would smile when talking about his relationships made on Robben Island. He was truly mesmerizing and we walked away from the interview feeling a sense of fulfillment. His presence alone was enough to lighten my day.

The first man we had the pleasure of meeting with and speaking to on our first day in Cape Town was the kind-eyed, welcoming, and captivating Thulani Mabaso. A former Robben Island prisoner, he now shares his stories as tour guide for the prison. But behind his life story was a constant underlying sadness that showed how much the past had affected him.  His story was explained with the help of many hand gestures, motions, and sound effects—but as animated as it was, he could not hide the deep sadness that reminiscing brought to him. 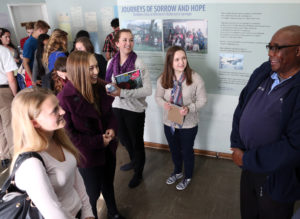 At one point, he was telling us about his first interaction with the wardens. “They threw me to the ground,” he explained, “Kicking my body… my face…”, motioning to a scar on his upper lip, his face quickly dropped as memories of that moment filled his mind. His eyes distant, he sat there for a few minutes in silence, tears rolling down his cheeks. But the silence wasn’t awkward. The quiet itself was filled with just as much feeling and weight as the actual story. I believe that that was one of the most powerful moments during our time with him. To see how willing he was to put himself into such a vulnerable state in front of a group of people he had only just met showed how strong he was and how far he had come in his recovery from such trauma. He ended with giving us advice and told us that, “You must first forgive yourself in order to forgive others,” and that is something that I will be thinking about for a long time. This first day with such an inspiring man has definitely made me intrigued to see what other valuable interactions will arise from our time here.