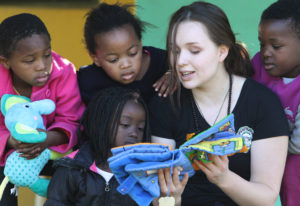 There I stood amongst dozens of small children, jumping, yelling, and playing on the lawn of the Philani Maternal Child Health and Nutrition Project, located in the heart of the Khayelitsha township. I slowly pushed my way deeper into the crowd of vibrantly colored sweatshirts and buzzing youthful energy, hoping to make a connection with someone. Soon, a small girl with curly hair and full cheeks wearing a pink jacket and purple pants came up to me with a wide smile on her face and her arms outstretched towards me. I crouched down and accepted her embrace, and to my surprise as I stood up she clung to me and refused to let go. Within an instant I was no longer a mere visitor, I was a human jungle gym. Child after child excitedly approached me, not hiding their intentions, fully aware of their cuteness and demanding to be carried. I could not deny any of the kids piggyback rides — the pure love that they showed me overpowered my ability to say the word no. 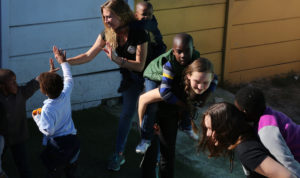 As my energy wore thin I took a brief break from the energetic children, and I walked through the courtyard, listening to the laughter and the clicking of Xhosa, admiring the pastel yellow walls, the lush acacia trees and the blue South African sky. As I was looking up I heard a gentle voice from below. “I love you,” the voice said sweetly. When I looked down I saw a small girl wearing a blue blouse, looking up at me with a sense of wonder. I was taken aback, partly because I was shocked that she was speaking English, but mostly because the first words that I hear from a complete stranger are hardly ever, “I love you.” “I love you too!” I responded immediately after processing what she said to me. I leaned over and swooped her up into my arms so that our faces were just inches apart. A set of thick eyelashes framed her stunning almond shaped eyes that were staring straight at me. I asked her name and she told me that it was Madeba, and she patiently helped me in figuring out how to pronounce it. She pushed my hair out of my face, smiled widely and said, “You are beautiful!” I didn’t know what to do. “You are beautiful too!” I responded. I was so surprised with how genuine she was. Madeba nuzzled her face into my neck. For a brief moment our worlds were still, and the commotion of rambunctious children was set aside as I rocked Madeba gently in my arms while she gave me pure love. 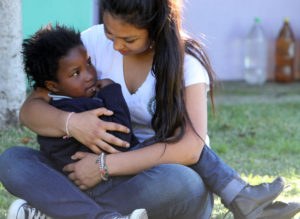 Our little paradise was swiftly interrupted by a girl shouting, “Up!” to me. I turned around and let her climb up onto my back. Carrying two kids, I slowly waddled my way over to a picnic table, set them down and allowed myself to recuperate. My two new friends climbed behind me and began to run their hands through my hair, and a third girl jumped onto my lap. Each girl sat on either side of me and put tiny braids into my hair. While fiddling with my hair, Madeba showered me in compliments. Although she did not know a lot of English phrases, everything that she said was so genuine. She looked at me and said, “You look lovely.” I told her that I love her. She paused, and said, “I am happy to see you.” I smiled, and she continued, “I am very, very happy to see you.” I was overcome with a strong sense of joy and gratitude that I was not able to contain. I buried my head into the hair of the girl sitting on my lap as tears began to seep out of my eyes. When I gathered myself, I asked Madeba to sing for me. Along with her friend, Madeba sang the South African national anthem, and I sang alongside them, and they were excited that I knew it. Madeba and her friend continued to play with my hair and sing to me. It was a moment of bliss, even though my scalp was undergoing stress. 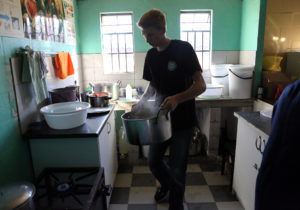 Visiting Philani Maternal Child Health and Nutrition Project in Khayelitsha township was a highlight for me. The township was filled to the brim with makeshift houses, life, and energy. Kids were playing outside their houses and ran up to us without a care. We entered the establishment with curiosity and were met by the staff with open and welcome arms. Holden and I were instantly whisked away to the kitchen to serve the kids food and then do the dishes. We got a good system going and befriended the cook, who finally got a day off from doing the lunch dishes. She was overjoyed, and could not stop thanking us, but along the way was having fun talking to us and telling us jokes. After Holden and I finished, we went outside to play with the children, who instantly saw us as mobile play structures. I probably held every kid that was there at least twice, and, trust me, there were A LOT of children.

One of them caught my attention. While I was exhausted, while the little balls of energy were sprinting around the yard in circles, screaming and yelling in whoops of joyful glee, a child walked up to me and raised his arms as he looked up and smiled, insinuating that he wanted me to pick him up. He had a shaved head, jeans, and a green jacket, and his smile was that of one who had not lost his innocence, even though he was growing up in a place where poverty and crime is so real and present. As I smiled and lifted him up, he rested his head on my shoulder and his chin on my neck and just stayed there enjoying the moment. I just stood, not wanting to move in fear that he would shift, but after thirty seconds he jumped out of my arms and joined the other rambunctious children. The rest of the day flew by, the kids, one by one leaving with their mothers, and after a tour of a tiny part of Khayelitsha, our journey was complete. We were forced back onto the bus and shipped back to the hotel with content minds, tired bodies, and happy hearts. 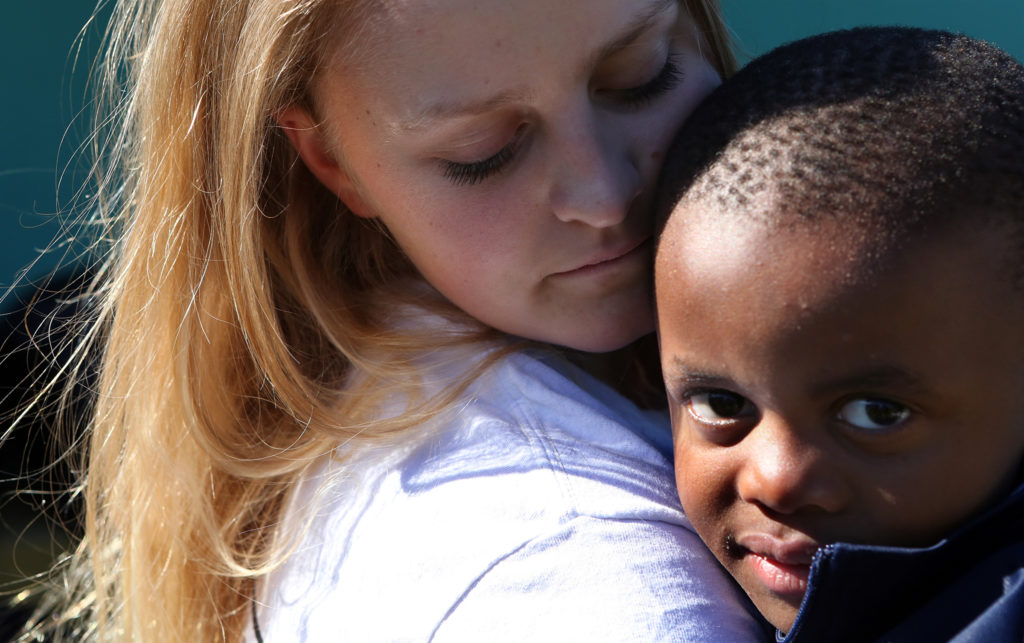