Dave Steward is the Executive Director of the F.W. de Klerk Foundation and was also Chief of Staff during de Klerk’s Presidency during the end of Apartheid.

Yesterday we interviewed Dave Steward: a man with a purpose. Before he arrived we were running around the room getting things organized. When we heard he was coming, we all stood and continued to stand in amazement as he walked in. The man himself was easily as tall I am (if not more) and was clothed in a truly unique ensemble. Steward had a tan blazer, pink sweater, green pants and pink striped socks to finish it off. Before he even opened his mouth, we had become adoring fans. We began going through the usual introductions then he mentioned that we are all originally from Africa and said, “Welcome home.” He then explained that he would like to draw a socioeconomic diagram of South Africa for us. Our group was initially taken by surprise, but we were interested, which led to our introduction of “Dave the Teacher.” 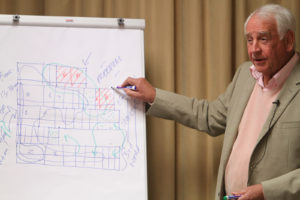 Mr. Steward began by explaining that the previous narrative of South Africa was a two-story house with blacks on the bottom, whites on the top, and no stairway in between. Steward’s narrative was very different. He said that South Africa is a 5-story house with the bottom two stories as the “deep third world” with divisions for each of the various tribes. The next floor, the 3rd floor, was the more rural working class, again divided into the various tribes. The fourth floor was the working class in and around cities and towns. The fifth and final floor was the elite of South Africa being mostly white but still having some black presence that has recently emerged. This diagram was a wonderful way to see South Africa in a simplified fashion as well as showing the poverty, how society is changing, and how great the differences still are.

When we transitioned back to our classic circle and began with our questions, we were introduced to “Dave the Person.” He was a very happy, open, and intelligent man. After about five questions, our teacher Ward started changing the order, much to my chagrin as the boom mike operator. I now had to move as quickly and as quietly as possible from one side of the room to the other as Ward decided which questions to ask. Steward’s answers were lovely, intelligent comments on the value of flexibility to the furthering of success and how personal relationships and trust are the hallmarks of a great public servant. The questions were coming from opposite sides of the room with little to no warning which made my task quite problematic.

One of the closest calls was when Mr. Steward was speaking about the crisis during his time in the government. South African Special Forces were caught outside a foreign oil refinery by the regional military the day and he had to go through multiple high level meetings with military commanders, UN officials and fellow bureaucrats all while not feeling well. The way he spoke and told the story was amazingly engaging and everyone was focused on him, until it was time for a new question. It was Katie’s turn but Devin and I were not aware of that. She was positioned just barely off to the left of the camera and I was across the room. As Devin and I moved to catch her, I had to drop the boom right across Devin’s face without hitting him or the precious camera. As we got into position only moments later than usual, I had a thought of, “Wow, Mr. Steward sure can draw an audience and keep them,” which was one of the main points that became permanently saved in my head. What I took away from his responses were ideas about flexibility, honesty, personal connection, what draws and keeps an audience, and “I hate bureaucrats.” Dave Steward is an amazing person who understands the ins and outs of politics and the importance of the relationships that make it all work.

Dave Steward is an interesting man. From our brief interview with him, it was plain to see that he loves his country deeply and trusts fully in the processes that govern it. He is a public servant through and through. And possibly one of the most sincere I have met. When we start an interview, it is customary to ask the interviewee if they would like to say any words to us. Mr. Steward took this as an opportunity to pass along a rather large amount of information that was clearly quite close to his heart. In a diagram he proceeded to explain to us how the population was distributed economically, how classes were separated by tribe and political alliances, and the movement of people within those social classes. Socioeconomically he compared South Africa to early eighteenth century Ireland.* 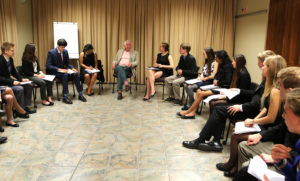 That however was not the end of his lesson. Next came an in-depth breakdown of the faults of the education system, which boils down mostly to bad teaching practices and non-existent teaching regulations. Then came details regarding the pervasiveness of the HIV infection and death rates, murder rates, and the lack of sufficient programs to deal with both.

This whole lesson was delivered to us with true conviction and heart, as if without it we would be totally incapable of understanding the country as he saw it. When he later answered our interview questions, it became clear to me that there was no question that I could have understood as well as I did without his previously shared insight into this world.

*I offer a challenge to those interested to find out what he meant by that.