As our bus pulled up into the dusty driveway of Botshabelo, an orphanage for children affected by HIV/AIDS, I took a deep breath and thought to myself, ‘Today I will not cry.’ It was an empty promise and I knew it. As soon as we got off of the bus we followed a long procession of women in white drapery with their heads covered in shawls walking along a dusty trail. Men in worn blazers and women with ceremoniously covered heads proceeded behind them on the path to the burial grounds. We slowly walked up the narrow dirt path along with them, dodging spiny thorn bushes and potholes in the trail. Panting dogs weaved in between us like motorcycles in highway traffic. 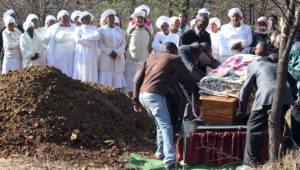 We arrived at the top of the hill and gathered around a hole in the earth. Mounds of rocks covered the ground and grass filled in between. The women in white shawls began to sing. I could feel their anguish and their yearning as if it was my own. This outpouring of emotions seemed like a very healthy way to deal with emotions. The men carried in a large wooden box and lowered it into the ground. They shoveled dirt over the coffin and smoothed it over methodically, placing rocks along the border. It was evident that they had done this many times before. The priest said a few words in Tswana, and we all said a collective amen. After the burial ceremony we walked back down the trail. I was silent, carefully observing my surroundings. I saw the ashy dirt, the men walking in worn blazers, and the heavy grief sinking into the faces of people who yet again had to attend a funeral.

When we returned from the burial grounds in the dry grassy field, a lanky girl with shortly trimmed hair slowly approached me and said to me, “Will you be my friend?” I put my hands on her shoulders and squatted down so that our heads were level and said, “Of course.” A shy smile peeked out of her subdued demeanor. We introduced each other, and I learned that her name was Nadeli. She wrapped my hands around hers and pulled my arms around so that I was hugging her. When we were given a tour of the village, she said to me, “Up” and I pulled her onto my back. She wrapped her arms gently around me, and her feet stuck out on either side of me. Her flip flops were twice the size of her feet. When I put my hand upon her back I felt her vertebraes sticking out unnaturally. I did not know Nadeli’s story, but I did know that she needed love and I was ready to give it to her. The kids at Botshabelo have experienced such hardship—most of them have been abandoned, abused or betrayed. On top of that many of them are infected with a disease that can cut their lives incredibly short. Marion Cloete, the founder of Botshabelo spoke to us about the organization and helped us in processing our experiences. She talked to us about what we can do for these kids. She encouraged us to be open to people and said that letting people touch our hearts will cause them to grow rather than crack. Even though connecting with children who live such tragically hard lives can be heavy, it truly does increase our capacity for love. Today I shed tears because of the connections that I made, but in that I became bigger than myself. 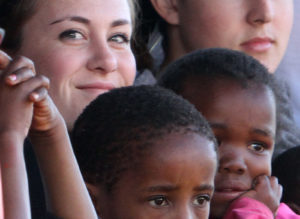 I held a dying child today. I don’t know what to make of that fact, but I know somehow it changed a part of me. Her name is Jessica, and she is six-years-old. We were giving out hotdogs and sweets to the children during a party we were throwing for them. That’s when I noticed her. She was sitting a few feet away from the other children and staring silently at the grass, tears pouring down her cheeks. Even with me sitting next to her and attempting to talk her, she remained unresponsive and silently sobbing. I motioned to Marion, the founder of Botshabelo, to try and see if she knew why the girl might be crying. “Oh, this is Jessica, and she is upset because she misses her mother.” Remembering that almost all the children’s parents had either died or abandoned them, I continued to try to give her some comfort. But her story wasn’t over. Marion leaned in and began to talk quieter.

She told me that the doctor messed up her AIDS medication and gave her the wrong dosage. It was almost doubled. And now it has made her emotionally unstable and she has no control over her mental state. “I don’t think she will live much longer,” she said. “I think it would be best if you took her somewhere private and just talked to her.”

Somewhat shocked by the blunt facts given to me, I carried her away from the other kids and just sat with her. She still wouldn’t talk. She subtly shook her head yes or no when I asked her questions, but that was it. So I just carried her for the rest of the day. She clung to me, her face buried in my neck. Occasionally her yellowed eyes would check on me but then revert back to the packed dirt we were standing on. When it came time for me to put her down, she clung to my sleeves and shook her head and began to cry. As heartbreaking as it was, I knew that she was safe at Botshabelo and that she will be loved just as much as I loved her in my short time there.

“Your lifetime isn’t even a flash on the timeline of the planet,” Marion told us this during her talk with us, and it resonated with what I often think about as we pass the shantytowns and townships, and what I saw today at Botshabelo. Each house in each township contains entire lifetimes and each person has a story and a future. Everyone is leading a different life. 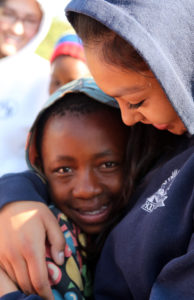 Today at Botshabelo, we witnessed the end of a lifetime but more importantly the celebration of her fight. We attended a funeral, held in the middle of a field surrounded by dirt graves and dogs, complete with an endless string of songs and a speech given in a language I could not decipher. We saw how brief and quick a lifetime, this flash, can be and how quickly it can end.

At Botshabelo, the children have a flash shorter than most, stunted due to their sickness. In fact, not many of the kids will make it to our age. Marion, the woman who started the AIDS orphanage, told us this herself. Perhaps they are not aware of this, but the children do not live a life filled with sadness or self-pity. Instead, they are brimming to the edge with love and affection. Gabby, the sweet and sassy little 11-year old I spent my day with, walked up to me with open arms and immediately asked to be my friend. I said, “Of course!” and we spent the rest of the day with our arms around each other. I knew that although our paths would cross for only that one short day amongst the handful of days in my flash of a lifetime, I would remember her forever. I will remember all of the kids’ endless attention, their almost-possessive love, and the look in their eyes every time they glanced up and smiled at you. They have had the roughest lives—being orphaned or abandoned, affected or infected with AIDS (often both)—but do not carry hate in their heart or anger in their eyes. They have such a brief moment on the timeline of the planet, too quick to be even a blip on the radar, but they love with no bounds.

Marion is using her flash to make a difference. She is taking her chance to create something monumental that will outlive and outlast her flash. She has created a home and taught love to the children whom AIDS has affected. During her conversation with us, she went around and asked some of us what we will do to make an impact. Each response was different, but she saw how each could benefit the world we live in. She told us to not feel guilty about being privileged, but rather to use our benefits to help others. She inspired me to find a way to make my tiny little instant on the lifetime of the planet count for something, just as she had. The children at Botshabelo make their flash count by sharing their bottomless love, and Marion makes her flash count by creating a home for children and women who need love and care with their sickness. The question has now posed itself, how will I make my not-even-flash on the timeline of the planet count? 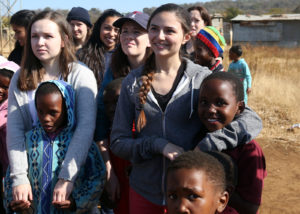 “I will never forget your name.” Seena, the little angel I had spent the entire day with, said these words to me. She looked up at me through long black eyelashes, staring like I would disappear if she looked away. Bongiwe, the birthday girl, was the one who introduced me to Seena. They showed me their patty cake games and chuckled when I didn’t pronounce their names correctly.

These kids adopted us quickly with open arms and hearts. Every child had their person; I could hear an array of tiny voices, coated with cultured accents yelling our American names with ease: “Elise! Max! CeCe!” In the back of my mind, I could feel a dull, aching reminder that it would be difficult to connect with such beautiful children and then leave them behind all in the same day.

But Marion, the woman who gave up everything just to make a difference in the lives of children affected by AIDS, told us this: “Your heart cannot crack; it can only grow.” The day spent with Bongiwe and Seena truly did make my heart grow. Standing within the rolling bare hills of Botshabelo with dogs and cats and tiny children all seeking my attention, my heart grew. It grew when I heard Bongiwe shouting my name from the crowd. It grew when I heard her singing Asimbonanga softly in my ear. It grew when Seena looked at me, our four brown eyes bound in a connection that will never be broken, and told me she would never forget my name. And I know that I will never forget hers.

Note: Our donation bags were delayed arriving, so we were not able to give them on our first visit. We are going to head out there tomorrow for a second visit to deliver 18 full duffle bags of clothes, medicine supplies, and other various donations that we hope will benefit Botshabelo greatly! Stay tuned for a second post about that adventure.