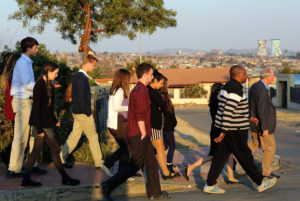 Upon entering the township of Soweto, I was surprised by how nice the houses looked. The cookie-cutter brick homes were about six hundred square feet or less and housed on average thirty-two people. Many lacked adequate services, were falling apart, or had vermin infestations. Still they looked comfortable compared to the shacks we saw in Botshabelo and parts of Langa.

Trevor Tutu, the Archbishop’s son, was our guide through Soweto. He explained one could determine the age of areas by looking at the size of the yards and the extent to which the houses had been added on to. When we got off the bus, I saw a line of ornamental grasses cutting through the stone beneath my feet. It pointed a straight path to the site where the first boy died in the Soweto Uprising.

The red sun was melting into the smoggy horizon and hundreds of taxis honked their way through the evening traffic. Two to three million people commute out of and into Soweto every day and most of them take the sixteen-seat vans that run throughout South Africa. Our group walked rapidly past stands selling oranges and bananas, small electronics, jewelry, and sweets. From up on a pedestrian bridge, we gazed out at the whole of Soweto, which quite literally extended as far as the eye could see in all directions. The sun had vanished entirely by that point and a few streetlamps twinkled to life in the damask smog.

On our way back, I reflected on the range of human experience we had seen today. People lived in nice apartments, government-built houses, and squatter shacks. People shopped at a mall where things were so expensive, there were no price tags, and at tuck stops that also lacked price tags because customers were expected to haggle down to the last rand to feed and clothe their families. I watched the crescent moon out of the bus window as it followed us, gliding over the houses and streets, seeing all the people of the world as equals.