You know that feeling before you ride a rollercoaster? The sweaty palms, stomach full of butterflies, the queasy feeling of not being in control? That’s how I felt every time I thought of the fact that we would actually get to meet Congressman John Lewis. I couldn’t believe we had the opportunity to meet a man so significant in the fight for civil rights. This morning before our interview, I made sure to pack both my copies of March, the first of his graphic novel series in which he describes his journey as a Civil Rights activist—I was hoping to get them signed.

We held the interview in his office. It was cozy and welcoming with black and white pictures covering the wall. They captured his raw moments of passion as a young activist. I remember one specifically; he was walking next to Dr. King, mouth open in either song or protest, brows furrowed, and fist placed defiantly on his heart. That powerful moment, preserved in such a small frame, was a reminder of the strength that lies within Mr. Lewis.

When Congressman Lewis walked in, his warm smile sent the butterflies in my stomach flying away. My nervousness melted away into excitement. Despite my sandpaper voice, I introduced the group. In response, he opened with some beautiful statements. One of them stuck with me. He said, “I believe in the way of peace, the way of love, of nonviolence, as a way of life.” I thought back to the brutality he faced and found it inspiring that he stuck so true to his values. Despite the anger and hatred thrown at him, he remained nonviolent—and even managed to find love for his perpetrator. When we asked him about how he had felt liberated the first time he got arrested, he told us that he had bought a suit for $5 at the second-hand store because he wanted to look good when he went to jail; he had been looking forward to it.

John Lewis brought to life a period of history that I have only read about in textbooks and saw in movies. To me, it had been an undoubtedly dark time in American History, but was so intangible that the blatant discrimination was a bit difficult to imagine. Maybe I am lucky to grow up in such an accepting society—or maybe I am too afraid to imagine the terrors people of color had to go through. Reading his graphic novel and speaking to him made me come to realize the battle that many people had to fight in order to reach racial equality. I didn’t meet John Lewis while he was fighting for civil rights, but I can only imagine the strength and passion he led with—especially while remaining nonviolent. I can still see it in him. In response to a question about self-doubt, without missing a beat, he said, “I have never doubted myself.” As someone who doubts herself often, I found power in the simplicity of his statement. He made waves of change, and it was in part carried by the power of belief in himself and his movement. Perhaps when change is so necessary, there is no room for doubt.

At the end of the interview, he closed with the advice, “Continue on the path of peace, of love, of grace. Never give up, be hopeful, be optimistic. Don’t get lost in the sea of despair, and be happy. Whatever you do, be happy.” Congressman Lewis faced discrimination worse than anything that my peers and I will ever have to experience, has fought battles more difficult than we will ever have to, and been violently attacked beyond what we can imagine, yet he remains an example of nonviolence.

His advice to be happy, no matter what we do, is hopeful. If he has remained happy, then I know that I have every reason to be happy too, despite any challenge I face. John Lewis is a symbol of standing for what you believe is right, being a leader of change, and remaining positive despite adversity. I will remember interviewing him—and getting a hug—forever. He has opened my eyes to the emotional and personal battles behind a dark part of America’s history. 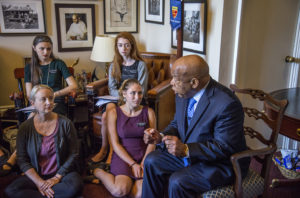 It’s not everyday one can say that they met a living legend. Right as Congressman John Lewis walked into the monument-plastered room, the history he carried on his shoulders was palpable, and I think everybody present felt it. Every word he spoke had a story behind it. However, all this backstory in no way reduced how incredibly humble this man was. Congressman Lewis never spoke down to us, never was condescending or pompous about how much he changed the country for the better. Kindness and humility are mannerisms that he proudly wears on his sleeve. His storytelling skills are phenomenal. One story he told will stay with me for a while. Years ago when he and a bunch of friends got off a bus, they were attacked and beaten by KKK members. Years later, a man came into his office with his son and said, “Hello, Mr. Lewis, I’m one of the men who beat you when you got off that bus. I want to apologize. I’m so sorry.” The son started crying, the father started crying, and Mr. Lewis forgave. And he cried as well, and they all hugged. I stood there in amazement after he told that tale. It blew my mind how a man could be so forgiving and nonviolent after suffering such harsh injustices, a lesson that so many people could learn today. I will never forget talking with this man and the genuine incredulity I felt during every moment I was with him.

We walked along the glossy marble hallway of the Cannon building, passing by freshmen office after office until we reached the placard embossed: Representative John Lewis. Our group of 34 was corralled into a quaint room with framed photographs and paintings of political figures and emotional scenes covering every opening of space on the tall walls. I found a seat in front of a glass display case filled with mementos of the Civil Rights Movement, photographs of a younger John Lewis and awards that he garnered over the course of his career as an activist and politician. As we sat, an anticipatory buzz filled the room as we investigated our surroundings. I clutched my copy of Across That Bridge, one of his many books, tightly to my chest and mentally prepared myself to meet one of the last remaining leaders of the Civil Rights Movement, the man who led the march across the Edmund Pettus Bridge in Selma Alabama and played a fundamental role in shaping the United States into what it is now.

John Lewis’ face is kind and warm, yet full of a certain strength and toughness. He spoke to us about his work during the Civil Rights Movement and some of the fond memories he had of Dr. Martin Luther King Jr. What amazed me the most about John Lewis was his dedication to nonviolence. He told us, “I believe in the way of peace, of love, of nonviolence as a way of life.” He proceeded to tell us the story of how he and his seatmate were brutally beaten by a member of the Ku Klux Klan in a whites-only waiting room at a South Carolina bus station during the freedom rides. Because of his adherence to nonviolence, John Lewis did not retaliate physically or legally. He told us that many years later, a man named Elwin Wilson came to his office in Cannon, and explained that he was John Lewis’ attacker. Elwin Wilson asked for forgiveness, and John Lewis accepted his apology. As he told the story, I could see that he was replaying this memory in his mind. He told us that he and Elwin Wilson are now very good friends because of the powerful bond of forgiveness. Hearing this story tugged at my heart and made tears gather along the edges of my eyes. I was full of admiration for John Lewis’ ability to forgive. I hope to follow Congressman John Lewis on this path of peace, love and nonviolence. 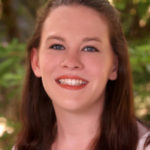 Congressman John Lewis’ office is full of civil rights history. The walls are covered with pictures of him and the amazing Martin Luther King Jr. You can see what he went through to have the rights that we have today. When he first entered he had a wonderful smile on his face, excited to talk with us. He had a sense of power around him and carried so much respect with him. When asked about his time with incarceration, physical abuse, and segregation he still says he lives by peace and love and that’s what leads him through life. It’s something we should all try to do to make the world a better place. He also said he kept his eyes on the prize and didn’t let all the negative things that happened to him distract him from the goal he was working towards. The thing that touched me the most was a story he told about the time he and his friend were at a bus stop and a group of men came and attacked him and left them in a pile of their own blood. Years later one of the men that attacked him came with his son to his office to apologize and without hesitation he forgave him. I wondered how he could forgive someone for doing such horrible things to him, but he said the most powerful experience is forgiveness. It’s something that I hope to have the power to possess. Another thing that amazed me was his relationship with Martin Luther King Jr. He said he wouldn’t know where he would be today without him, and he was like a big brother, and to have the privilege to work with him was such an honor. It was a privilege for us to be able to interview such an amazing man.