After lunch we made our way along the streets to Jama Masjid, the mosque that towers over Old Delhi. The mosque was breathtaking in size, beauty, age and history. We were asked to take our shoes off and women wearing western clothes were fitted with smocks for modesty before we could walk through one of the three massive gates of the mosque. 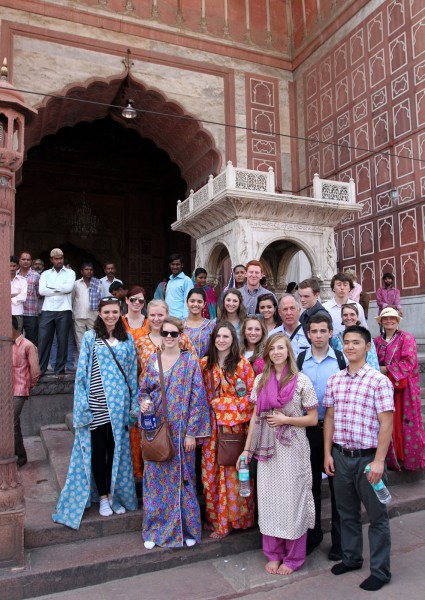 The mosque was several thousand years old, its last climbable tower, whose 115 step, dizzyingly narrow staircase gave me a monstrous headache, gave a view of the city that only a picture could help to describe. The mosque was massive and could hold a few hundred thousand people for prayers during important religious holidays. Though only a few people were there to pray when we were, the presence of faith and devotion surrounded us. At one point we were given special treatment and shown holy Muslim artifacts, including scriptures written on deer skin and a hair from the chin of the prophet Mohammad. Though we ourselves were unable to appreciate the full meaning of these objects, the Muslims around us crowded around and elbowed their way to the front of our group to catch even a glimpse of them. They looked fascinated and intrigued, and I was struck with the sense that for them, this could be a life-changing event that affirmed their beliefs. I’ll never be able to comprehend how much faith those people had, but visiting Jama Masjid at least made me more aware of my ignorance towards religious faith. I have a greater appreciation for the religion of Islam and it’s followers because of our visit there.