I found Congressman David Dreier to be a breath of fresh air. He has served in the House of Representatives for over thirty years and is Chairman of the Rules Committee. Despite media criticism and the exceptionally low public approval rating of Congress, Congressman Drier remains amazingly optimistic about the state of government. He told us that he believes that Congress is as good as it has ever been. Congressman Dreier referenced a quote by James Madison about how the process of lawmaking is ugly, messy and difficult. He said that this is an important part of governing.

It is easy to see that Congressman Dreier, who had worked till midnight the previous night setting the rules for a bill, has a great understanding of the legislative process. He seems to have a clear set of ideals and he uses these to guide him in his decision-making. Speaking with Congressman Drier helped me feel that there is still civility and compromise in government.

At this time the approval rating of Congress is very low. Its critics bemoan its increasingly divisive partisanship and lack of unity. There seems to be a common occurrence of nostalgia, a yearning for an age long past. For a long time I too had resigned myself to yearning for a bygone era, but then I met Congressman Dreier. Although the Republican congressman was not without criticisms of his Democratic counterparts, particularly their lack of transparency during their period of majority from 2007-2010, he had great respect for many of them, especially fellow Californian Congressman Farr. 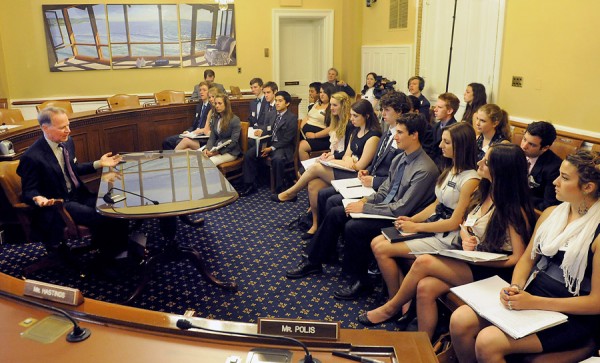 Congressman Dreier was inspiring as he talked about the House of Representatives. Far from disparaging the partisanship and divisiveness that many think plague the modern Congress, he opened our eyes to many great aspects of this legislative body that have been maintained over more than 200 years. He marveled at the fact that although the House of Representatives often seems like 435 class presidents coming together, these 435 individuals are still able to accomplish great things for the nation.