Congressman Frank told us that he thinks people need to follow their ideals because if something is important to them it should be their first priority. He said that he does not think protesting in general is effective as an ends in itself. It must serve a strategic purpose.

I have found everyone we have interviewed so far to be unified in his/her ability to communicate effectively. This communication certainly has taken varying forms. For example some, like Alyse Nelson and Layli Miller-Muro, established an emotional connection first. Congressman David Dreier and Congresswoman Loretta Sanchez were very good at making us feel comfortable using humor, while Susannah Shakow and Congressman Dennis Kucinich could quickly and convincingly describe their beliefs. During our interview with Congressman Barney Frank, I found the idea of effective communication taken in entirely new and unexpected directions. 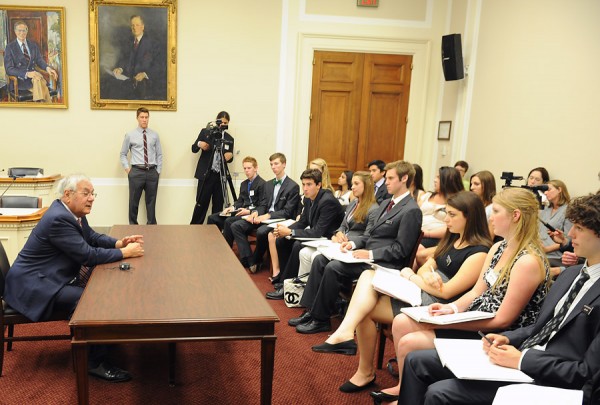 Congressman Frank is a little famous for his sense of humor and I would recommend googling quotes of his. I suppose Congressman Barney Frank could be characterized by the way he speaks as clearly and as directly as possible. He explains things as exactly as he sees them. He seemed to put no effort into impressing us and succeeded even more because of this. Our interview with Congressman Frank was the only one I felt truly nervous about, yet it was also one of the interviews I was most excited for. I think this was partly because I imagined that he was someone who could answer questions about government and society deeply.

After serving over 30 years, Congressman Barney Frank is leaving Congress. When we asked him about his reasons for retiring he claimed just to be tired and expressed no particular regrets about leaving. We read that he said that he wanted to retire “before it became necessary to tweet.” He told us that he was ready to write a book. He wanted to be a part of the exchange of ideas.

He also talked about a variety of other things like, way emotional release alone doesn’t produce change, about the effectiveness of humor as a tool and as a consequence of boredom, about the need for a shared sense of justice within a democracy, and about the non-existence of the past golden age implied in some current discussions of America’s problems. In his ideas on change, I found a perspective distinct from that of most others we had talked with. He argued that idealism required someone holding true ideals to understand all the issues and do the work necessary to realize their ideas. He said that internal transformation and passion alone is rarely a solution to external problems. If someone sits in a tent to protest for the legalization of gay marriage there is no real political value without an idea of how sitting in the tent will lead lawmakers to change their votes. He talked about the tactics of Martin Luther King Jr. to illustrate this commitment to truly and practically create change.

Before our interview with Congressman Barney Frank began, I was not sure what to expect. I had heard about his humor and straightforward manner. He entered the room abruptly and got right to business. As soon as we began to ask Congressman Frank questions, he opened up to us. He told us of his excitement about retiring from Congress. He said he wants to have time to write. He said, “Good people tell me I’m going to regret it, but I’m tired.” 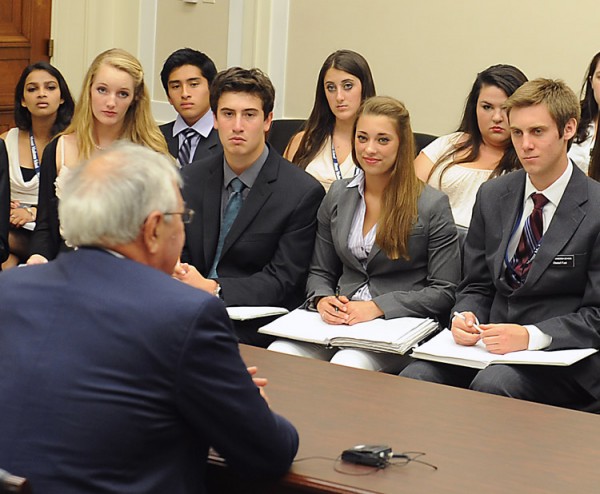 I asked Congressman Frank about how he felt being named the “funniest member” by a survey in the Washingtonian. He responded by telling us that humor helps him with his “likability” factor. “Humor gives me another weapon,” he laughed. “Making people laugh makes you likable.” This proved to be true.

When we asked Congressman Frank about how to bring about change, he said, “Simply expressing emotion in itself does nothing.” He informed us that only committed and motivated action could cure a problem. He asked, “How does sleeping in a park together and banging a drum change anything?” We all laughed but we understood his point.