Today we went to the Philani Health and Nutrition Project. Philani’s website describes it as a community-based non-governmental organization (NGO) committed to the protection of the rights of every child to proper nutrition and healthcare in communities where malnourished children and destitute mothers are most vulnerable. Philani, established in 1979, is in the township of Khayelitsha. Along with doing outreach work in the community, Philani runs several pre-schools and has a program that teaches women to make various handicrafts that are then sold at their gift shop. 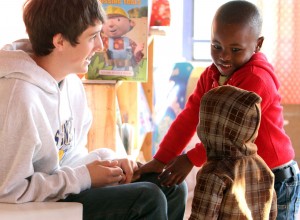 When we arrived we were quickly introduced to the head of the organization, Ingrid. Ingrid then introduced us to Vanessa who gathered 9 of us and separated us into two groups to go work at two sites outside of the main compound. My group was comprised of Luciano, Jenny, Martin, and me.

When we arrived at what is called site C, we were immediately immersed in a group of children that spoke only a few words of English. In spite of this, our interactions with the children completely blew me away. Not only were we able to communicate, we were able to communicate in a way that did not require any sort of discernable words. We were engaged in a conversation that was filled with funny faces and other random noises.

Still, this was not the most striking thing from today. The most striking thing for me was the pure excitement that the children had for us and the simple fact that they wanted nothing more than for us to just be there with them. This surprised me because in the USA I don’t think the kids would have had the same reaction to a group of children from some far off country coming and visiting.

Coming into this situation I thought that the kids would not be comfortable with us. However, I was proven wrong. During our time at the work site, I realized that even the smallest act of smiling, waving, or saying hello had a large impact. This experience has made me want to think more about the non-materialistic things in life; the things that people do to and for you, like a hug or saying hello. I have now seen how the simple act of saying hello can have a big impact on another person. 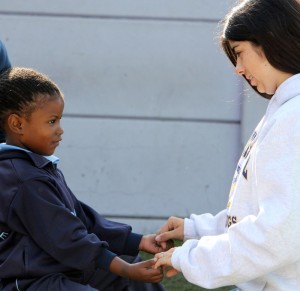 At Philani, Olorin and I interacted with children ages 4-5 years old. I had heard stories from previous classes at Mount Madonna School about how they had immediately connected with the children and I assumed that this would also happen with my class.

When we first arrived we helped the children work on their schoolwork. They seemed shy and they were just talking amongst themselves. It was hard for me to find a way to connect with them because I did not speak their language. That frustrated me a little because the stories from the previous groups had made connecting sound so easy. I was trying very hard to connect with the kids but it was difficult for me because I am shy and quiet around new people. I was also making sure that I didn’t group up with Olorin because Ward often tells us that it is important to spread out. This also made it difficult for me to connect with the kids because I was on my own.

A little bit into our morning I began to feel things shift. I helped a girl finish a wood puzzle, and once she was done we started playing a game where we pushed it back and forth across the table. I was pleased to finally feel connected with one of the children. I had been watching Olorin give children high fives and shake their hands and I wished I could connect to the children as easily as he did. Once they finished their schoolwork they went to another area and all sat down on the floor. Olorin and I came over to them and everyone wanted Olorin to give them high fives and do this hand snap thing. I was just standing there watching when all of a sudden one kid wanted a high five from me and then a bunch of kid’s hands surrounded me, wanting high fives. I was ecstatic to be connecting with a group of smiling children. Our trip to Philani has been the highlight of my trip so far.

Today as we drove to Philani I noticed a shift from buildings that reminded me of home, to small, tin shacks that hundreds of thousands of families lived in. The moment I entered Philani, I was filled with both excitement and uncertainty. We were split into groups to help with work for the day. Sally and I chose to help in the 6-7 year old classroom. When I walked in the children all looked up at me, I must have seemed so tall and new to them. One girl stood out to me. When I walked in the room she smiled at me; later she told me her name was Yabona. Throughout the morning we exchanged smiles and high-fives. 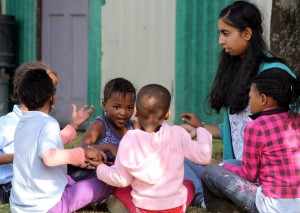 During recess I saw a circle of little kids singing and clapping, and I decided to join them. Their energy was so contagious that I couldn’t stop smiling. I ran around in circles with them as we danced, sung, and played clapping games. These children were filled with positivity, energy, and love. After recess, Sally and I went back to the classroom with all the little children. The teacher asked the kids to stand up and talk about news that happened over the weekend. They all spoke in a different language. Yabona went up and told her story in less than a few seconds. The teacher told me that this past weekend Yabona’s family’s house had been broken into. This struck me; even though she was going through a tough time she was still filled with so much love and laughter.

The work we did today and the conversations we had with the caseworkers, and Ingrid, inspired me. It was amazing to see their commitment and passion towards what they love to do. Their dedication motivated me and strengthened my desire to help people through my work. It made me want to impact people’s lives in a positive way.