Today we interviewed Mr. F.W. de Klerk at our guesthouse. Both our class and the hotel staff, who made sure to make the place spotless for his arrival, excitedly anticipated his presence. When he arrived, we all stood up and greeted him. He had a very charismatic grin, and he seemed to radiate both gentle kindness and intense intelligence. He sat right next to me, and started out the conversation with an introductory statement to us students. What he said pulled me in immediately. He talked about the fact that in order to understand South Africa, one must understand the diversity it contains. He said that many people view South Africa in the context of Apartheid, and that means black and white. But really it’s much more complex than that; to start with there are 11 official languages.

Later in the interview he addressed the issue of the balance between unity and diversity. I had never thought about this before, but it really rang true in my ears. Sometimes I think that people throw around terms like unity and diversity in the same sentence because it makes them feel like good people without truly understanding the depth and meaning of the words. Mr. de Klerk is exceptionally wise and seems to understand that sometimes a culture rich in different subcultures will have difficulty agreeing with each other on everything. He sees the importance in striking the right balance between valuing both diversity and unity. He also understands that unity, diversity, peace, and love are not just simple concepts that can be easily attained all at once. I was fascinated by the interview and I feel privileged to have experienced it with all my friends. 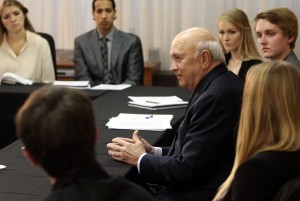 Today was yet another fruitful day of learning in South Africa. My class and I had the incredible opportunity to interview the former president of South Africa, F.W. de Klerk. What can I possibly say about this interview? He spoke so many wise words. One thing that really resonated with me was when he spoke about his belief that politics is a calling, not a profession; that politicians are meant to serve. I think that this is something that everyone should think about. It makes sense that politicians should make decisions based on moral principles. I have the utmost respect for F.W. de Klerk because of his humble nature, despite all of his amazing accomplishments. I appreciate that about him very much. Actually, the fact that he even decided to come see us at all is proof of this. Our final interview question for him was why he agreed to see us for the interview. His response was that he liked the delivery of the initial request, and we didn’t give him a good reason to say no. That just goes to show that he is still human like everyone else, despite all of the admirable acts he has on record.

I found it strange how hard it was to appreciate the magnitude of the situation I was in. I sat in the room, and spoke with a man who participated in the ending of the racist system of Apartheid, yet he seemed no different than anyone else in the room. I will always admire people who remain humble, even when they are globally praised for their contributions to the improvement of mankind. I am truly honored to have had the chance to meet such an inspirational man, and I will never forget his lessons.