There are many people in South Africa that contributed to the fight against Apartheid who stay behind the scenes. One of these men is Peter Harris. He is a lawyer and author who grew up during Apartheid and has since become a human rights lawyer. He defended people who many in his country called terrorists. One of his most famous trials is the Delmas Four trial where his clients chose not to participate in the trial because they wanted to be tried as prisoners of war instead of in a criminal court. He also played a huge role in the first democratic election in South Africa. He was part of the IEC that set up an election for twenty-two million people in only four months. He still practices law, often participating in anti-corruption cases. We were lucky enough to be able to interview this inspirational man. 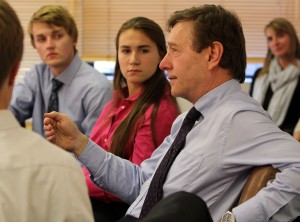 I put a lot of effort and time into preparing for the interview, so I was especially excited for it. I read both of his books and in reading them I learned that he is a man of integrity. He is also a very humble man. Because of this, I think that this was the hardest interview to prepare for, but also one of the most interesting.

Throughout the interview I learned more about the work he did and his views on the current state of affairs in South Africa. I found Peter Harris to be a very inspirational man and I will never forget some of the things he said. What struck me the most was when he talked about how important commitment is in accomplishing our goals and dreams. Commitment has been stressed throughout my life, especially in sports and school. I agree that commitment is needed throughout life to accomplish our goals.

Today we interviewed the lawyer/author/activist Peter Harris at his office in Johannesburg. He was a very humble and soft-spoken man, but there was clearly a lot going on in his mind. I could tell that there was more to this man than met the eye.

The interview went very well; he answered all of our questions carefully, thoughtfully, and completely. His answer to our question about how to solve the nation’s problems of poverty and inequality stood out to me in particular. He said rather simply, “We must go back to the basics.” Now this is not an easy question to answer. I think most people, myself included, would expect the answer to be very layered and complex but Mr. Harris said that this is an unnecessary assumption we humans tend to make. We assume that complicated issues have complicated solutions, but many times the solution is sitting right in front of us. If I’m completely honest, I wouldn’t have believed his statement if he had not given us a specific example. He said that in order to weaken the blow of poverty and inequality we must simply build houses and clinics, and continue to spend money on developing technology and infrastructure. He said that if South Africa did these things many of the problems facing the nation would be solved. He said that South Africa, unlike many other nations, has the resources needed; therefore there really is no excuse. He also said that complexity should not be an excuse for lack of action.

This interview really got me thinking. I wonder how many heavily debated problems in the world could be fixed if we just looked at them from Mr. Harris’ perspective. I don’t know if he is right or not. I don’t know if complicated problems are solvable through simple solutions as often as he seemed to imply. But either way, I enjoyed the interview and I think it served its purpose; to enable us kids to think from a new perspective.